Not afraid of flavor at Bistro La Bon 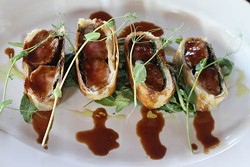 When you use the word bistro in your name, people think French. You double this expectation with the rest of the name: La Bon — except that in French it should be either Le Bon or La Bonne. It is confusing.

Bistro La Bon, though, is neither French nor is the food confusing. The restaurant is the concept of Chef Majid Amoorpour, who has been a pastry chef in noted Charlotte kitchens such as Dean & DeLuca SouthPark, Noble's, Café Monte, Sonoma and Blue. He took breaks from Charlotte to work at Charlie Trotter and Tru in Chicago, and with a former Alain Ducasse chef in Bristol, England. Elise Siharath is co-owner and general manager. Bistro La Bon is their first enterprise.

Located in an awkward Plaza Midwood strip center, the gangly space of Bistro La Bon seems relaxed. A few patio tables spot the front (overlooking the vast parking lot) but just inside is a comfy lounge area. The 85-seat dining room flows beyond that, sided by a long dark wood banquette. The room's large palladium windows at the rear capture the skyline — at sunset at dinner. Local artists works punctuate the walls.

Since the recession hit (September 2008), Charlotte has suffered from eerily identical menus. Don't get me wrong — I can understand why. After all, Charlotteans are filling the seats at these comfort emporiums. But for those weary of missionary position food, Bistro La Bon offers to jumpstart the palate.

Note, though, there is a burger on the entrée list. But other entries are fanciful cross-cultural borrowings. The kitchen, in fact, delivers dishes that are energetic, if not hand-me-downs, yet this is not cutting-edge cuisine. Starters include hummus (yawn), duck confit (half-yawn) and shrimp-stuffed squid (yum).

La Bon considers itself a neighborhood place first and you get the sense of that — niceties without pretension. You won't be offered a bread basket, yet the kitchen makes the cranberry walnut bread for the roasted pepper and goat cheese sandwich on the entrée list.

A dish like the finely grained lamb Wellington starter arrives with a lovely aroma of mint, which wafts around the table. The Caesar salad also highlights the deft hand of the kitchen. Crisp-skinned free range chicken, accessorized with spinach gnocchi and porcini cream, is sublimely juicy. The succulent grilled Scottish salmon, veiled in a slightly too-sweet honey and ginger glaze, hunkers down with Asian greens and wasabi mashed potatoes. Never mind such quibbles though: Everything that is good is wonderful.

One original dish that does not work is the overly encumbered mushroom stuffed brioche.

Desserts are a must in a place owned by a former pastry chef. A well-crafted bread (actually brioche) pudding arrives on a calligraphic plate while the tarte tartin with caramelized peaches makes you want summer to stay forever.

While the interior is not exactly elegant, and the service is friendly (not polished), the menu, albeit brief, at Bistro La Bon earns high marks for its unforced flavor. Clearly, though the name of Bistro La Bon may be confusing, Chef Amoorpour's straightforward dishes are not.