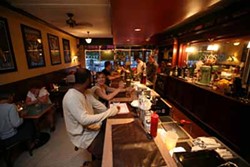 Architects, planners and developers strive to recreate an easy urbanity whose cornerstone is the rarely found city neighborhood bustling with vigor and healthy retail. The irony is that these planned retail spots, even near the urban center (such as Midtown), are filled with suburban-type big box stores and their accompanying corporate restaurants. Increasingly in Charlotte, the movement is to leave those strangely configured suburban and ex-urban neighborhoods for personable urban ones. Typically, a dominant reason for leaving is suburban conformity. What lures people back to the urban center is the promise of authenticity and a strong sense of community.

The original Foskoskies Drive-In Restaurant Motel was opened in 1947 by restaurateur Walter O'Leary Rushton's maternal grandparents. It was a family business, subsequently inherited by his parents and a place in which he grew up. The name Foskoskies is of uncertain origin, but Rushton's 90-year-old grandmother believes it to be her husband's creation. Framed black and white photographs of Rushton's grandparents and their employees in the Georgia Foskoskies dot the walls in the Plaza Midwood eatery. The first Foskoskies closed in 1975. Rushton, who moved to Charlotte in 1989, wanted to open a similar place in Charlotte. He spent 13 years at Pewter Rose in South End before he saw the opportunity in the Plaza Midwood space. Formerly, the spot had contained the original Pike's Old Fashion Soda Shop which relocated to bigger and newer digs in South End.

Foskoskies' interior is small, seating only 32, but is charming in that old-styled Southern way. The small tiles of black and white, and original oak bar stools with brass foot railing belie the heritage of an old pop shop. Dark wood shelving frames the large mirror across from the counter while small tables line the wall. A secluded 24-seat patio is located towards the rear of the shop.

In the kitchen are chefs Caine Ayres, who was also at Pewter Rose, and John Lock, a graduate of the culinary program at CPCC. The menu is a small, but incredibly smart and incredibly nonthreatening. No need for the Food Lovers Companion, though. They even go as far as calling haricot vert "green beans." The daily specials, ambitious for such a small kitchen, are the real treat. Some dishes are quirky: the lima bean hummus starter with fried won tons, for example. Some dishes are ones only the Paula Deens among us would love: Honey-pecan fried chicken oozing with honey (which ended up making substantial parts of the crust soggy). This dish is sided with a ubiquitous 1950s-styled rice, broccoli and cheese casserole.

In many neighborhood places, duck isn't even attempted. But here the dish is an affectionate reawakening with luscious slices of meltingly tender duck made frisky by a tightly flavored pomegranate sauce. The duck is counterbalanced by precisely cooked haricot vert and serious polenta fries. Desserts such as the berry cobbler and brownie are straightforward and commendable.

Most dinner entrees are $13 to $18, but Rushton reports that a recent Osso Bucco special at $29.95 sold out quickly, too. On Nov. 1, Rushton plans to open the adjoining space to function as a private room for an additional 20 to 50 people and a place to hold wine dinner events.

The welcome at Foskoskies is more effusive over the phone and the phone doesn't stop ringing during the evening. A steady line of customers come in to pick up their to-go orders, and many stop to talk to one of the servers or Rushton. Thus, the service is more personal and less polished; but hey, I think they all know each other.

These regulars could make you long for an old-time neighborhood spot of your own -- if you don't live near one already. Although Foskoskies is full of eccentricities, it also offers great culinary discoveries and a sense of community. This is the kind of place where all the elements click like tumblers. Rushton got it just right.

Do you know of a restaurant that has opened, closed, or should be reviewed? Does your restaurant or shop have news, menu changes, and new additions to staff or building, upcoming cuisine events? To contact Tricia, send information via e-mail (no attachments, please):