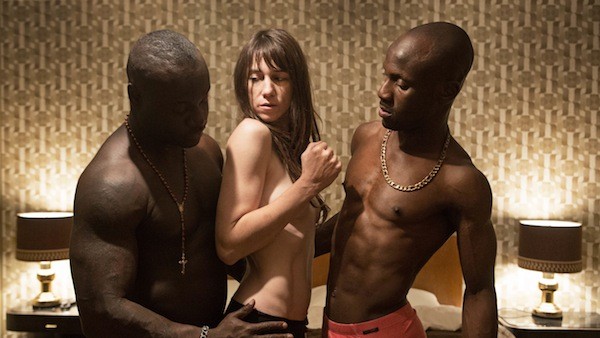 Cinema needs its misanthropes as much as it needs its Pollyannas. In a multiplex landscape in which happy endings are almost always preordained, there's something to be said for the filmmaker who decides to remind viewers that the world is not always a happy place and the good guys don't always win out in the end. Admittedly, there are scores of moviegoers who don't want any reminders of life's harsh realities, and I can respect that. But for me personally, I can only take so many Adam Sandler comedies or Katherine Heigl rom-coms before I need a No Country for Old Men or a Fruitvale Station to cleanse my celluloid palate.

I used to be able to count on Lars von Trier to deliver my necessary doses of nihilism, but no more. The risk-taking raconteur behind such bruising beauties as 2003's Dogville, 1996's Breaking the Waves (out this month on Blu-ray from Criterion and reviewed here) and 1991's Zentropa (aka Europa) hasn't engaged my senses in years, and this pattern follows suit with the limp-wristed one-two punch of Nymphomaniac: Volume I and Nymphomaniac: Volume II. This two-part, four-hour saga is ostensibly about the mental, emotional and physical anguish of the titular sex addict, but it ultimately offers as much insight into the female psyche as one of those tampon commercials that shows a woman cheerfully riding a horse down a sun-dappled beach.

As Volume I opens, we see Joe (Charlotte Gainsbourg) laying bruised and battered in an alleyway. A kindly man named Seligman (Stellan Skarsgård) takes her home and tends to her, at which point she decides to spill her life story. She's a bad person, she insists to her rescuer, and it's up to him to convince her otherwise. And so she begins, relating how she's been a nymphomaniac since a very early age, although she didn't lose her virginity until she was a teenager (played in flashbacks by Stacy Martin) and offered herself to a grease monkey named Jerôme (Shia LaBeouf). From there, she and her best friend (Sophie Kennedy Clark, the young Judi Dench in Philomena) would compete to see who could sleep with the most men. After she becomes an adult, she again connects with Jerôme, who's now a successful businessman. She continues to have anonymous sex with wanton abandon, but as the chapter closes on Volume I and we head into Volume II, we see that she's now having trouble feeling any pleasure in her nether regions.

Volume I is the superior part (mild praise, indeed), largely because the relationship between Joe and Seligman is nicely established and Christian Slater (as Joe's dad) and especially Uma Thurman (as a wife whose husband leaves her for Joe) contribute strong supporting turns. It's also because we're still willing to give von Trier the benefit of the doubt, expecting the vagueness of Joe's addiction to become more clear in the second part. But that never happens; instead, Volume II is little more than the writer-director clumsily offering a checklist of sexual mores — threesomes, lesbianism, sadomasochism, even talk of pedophilia — and descending further into his debasement of everyone and everything.

Von Trier spends so much time lovingly showing Joe punched in the face by various men (including an S&M dude played by Jamie Bell; say it ain't so, Billy Elliot!) and suffering lashes across her bare, bloodied buttocks that he'll doubtless face another round of misogynistic charges, accusations that have dogged him for most of his career. I'm not ready to pile on — I've always felt he had the backs of his harried female protagonists, whether it was Emily Watson in Breaking the Waves or Nicole Kidman in Dogville or Bjork in the daft Dancer in the Dark — but I will say that for a work supposedly about female empowerment and rising above a stifling patriarchy, I find it odd that a central plot thrust is that it's the male Seligman who's given the task of forgiving the female Joe for what she herself calls her "bad" deeds. And for every scene in which Joe decides to own her nymphomania, there's another where she condemns it, a seesaw development that reveals the author to be as confused as his character.

Ultimately, the movies steer away from Joe's sexual behavior (where even the healthy aspects are treated as diseases) and merely wallow in the mire of loathsome human behavior. This is most evident toward the end of Volume II, when the camera focuses on a closed bedroom door. I was willing to cut the film a little more slack if the door remained shut, if it didn't open to reveal what I totally expected to see. But no such luck: Unable to control his disgust at all of humanity, von Trier allows the door to open, and the scene then unfolds in predictable, clockwork fashion. Von Trier doubtless thought he was taking a bold stance in showing the utter depravity of the world, but all he's shown is that his films have grown as flaccid as a penis in repose.