Olympus Has Fallen: Action flick lands with a thud | Reviews | Creative Loafing Charlotte
Switch to the mobile version of this page.

Olympus Has Fallen: Action flick lands with a thud 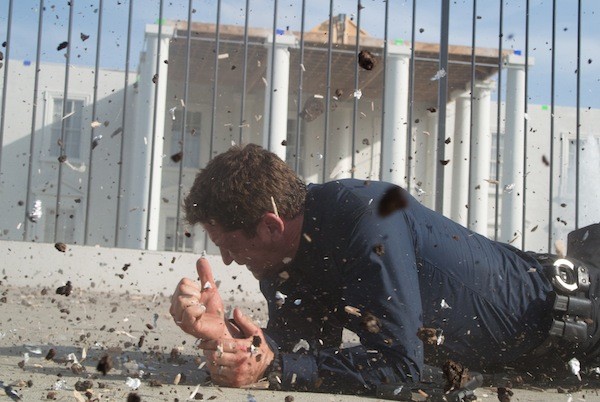 A better Die Hard movie than the godawful A Good Day to Die Hard, Olympus Has Fallen still registers as a stale action flick whose primary worth is probably as a heartland alternative for red-meat moviegoers wary of the sexy sinfulness of Spring Breakers or the highfalutin' idiosyncrasies of Stoker. It's basically two hours of "America, Fuck Yeah!" — the Team America: World Police anthem that has unofficially been the motto of everything from the 2012 Summer Olympics to the Iraq War.

Perhaps in a calculated move not to alienate Tea Party ticket holders, the president in this movie is white: Benjamin Asher (Aaron Eckhart), a decent politician whose best friend, Mike Banning (Gerard Butler), also happens to be his best Secret Service shadow. But a personal tragedy forces the men to split up, and when the White House is attacked by North Korean terrorists and the Prez is nabbed along with some key staffers, Banning has to work his way back onto the Pennsylvania Avenue property before he can go all "yippee ki yay" on the assailants.

Director Antoine Fuqua, known for gritty films like Training Day and Brooklyn's Finest, takes a page from the Roland Emmerich/Michael Bay handbook by opting for all the bombast money can buy, thereby uneasily squishing together ample money shots (The White House gets blown up! The Washington Monument crumbles! Gerard Butler flexes his muscles!) with casual brutality (civilians are mowed down like so much grass). It's all very busy but not especially exciting, and it does little to transcend what was doubtless its pitched tag as Die Hard Meets Air Force One. Debuting screenwriters Creighton Rothenberger and Katrin Benedikt keep the story moving at a rapid clip, though they occasionally do stumble into plotholes: One character is a traitor committed to his new cause until he suddenly isn't; a code is required from a certain person until it suddenly isn't.

Eckhart is always good, and Butler generally fares better in action flicks than romantic comedies. Reliable Robert Forster brings his gruff demeanor to the role of the irascible head of the Joint Chiefs of Staff, while reliable Morgan Freeman brings gravitas to his scenes as Speaker of the House Trumbull. Placed in charge once the president and vice president (Phil Austin) are captured, Trumbull does everything in his power to make sure these White House occupants are safely released. Clearly, John Boehner will hate this character's MO.

Olympus Has Fallen is not showing in any theaters in the area.