Photo by Lance Anderson on Unsplash

To say that Americans love sports is an understatement. It’s in our blood. We value sports as much for their personal and social benefits as for the thrill and drama of the game. In the U.S., 59 percent of all adults claim to be sports fans. In 2018, more than two-thirds of the top 100 telecasts watched live or the same day were sports events. That number rises to more than 80 percent for the 18 - 49 age group.

In search of the best sports cities from the fan’s perspective, WalletHub compared over 418 cities across more than 50 key metrics related to the five largest sports in the U.S.: football, basketball, baseball, hockey, and soccer. Scroll down for the winners, expert commentary and a full description of the methodology. 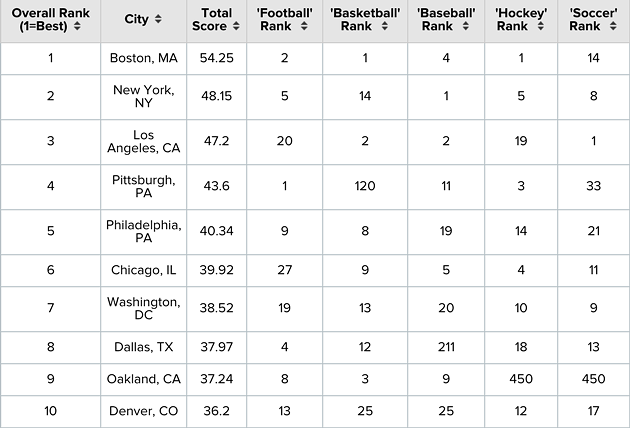 In order to determine the best sports cities, WalletHub combined the results from its previous rankings listed below. Each sports category was assigned a weight corresponding with the total percentage of adults in the U.S. who claim to follow that particular sport, according to The Global Sports Media Consumption Report. Because some adults claim to be fans of more than one sport, the sum of all the weights is greater than 100 percent.

Each sports category was also graded on a 100-point scale, with a score of 100 representing the most favorable conditions for sports fans. Finally, WalletHub determined each city’s weighted average across all sports categories to calculate its overall score and used the resulting scores to rank-order the sample.

The sample includes a total of 418 U.S. cities, categorized according to the following population-size guidelines: