Pho Cali is a cultural exchange 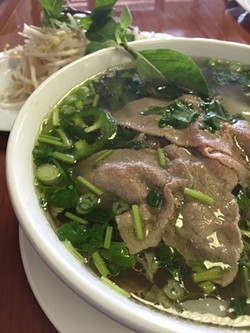 California has given us more than In-N-Out Burger and the farm-to-fork movement of Alice Waters' 44-year-old Chez Panisse (if you thought farm-to-fork is new, it is not): this state has also effectively put a spin on a variety of ethnic cuisines from Chinese to Mexican. Since California is a gateway from Asia into the U.S., many Asian communities, including Vietnamese, have flourished there and developed a subgenre of their cuisines. Some of these are found here in Charlotte.

Tich Tran, wife Lieu Bui — both originally from southern Vietnam — and son Tony Tran moved from Sacramento, California, to the Q.C., and in 2014 opened Pho Cali. A map of California is prominent in the logo and the sparse space in a small strip center has all the hallmarks of a family restaurant.

On the menu are 16 variations of pho, primarily beef. But lurking at the bottom of the list is Pho Hai San, a complex chicken and seafood broth soup, and Pho Ga Dac Biet, a chicken noodle soup. Pho (pronounced fuh, not faux) is dependent on the flavor of the broth and in Vietnam this varies considerably from Hanoi to Ho Chi Minh City.

In the north, the ancestral home of pho, the broth is austere with charred shallots and ginger; whereas in the south, the flavor is big, buttery and accompanied by a tray of herbs, sprouts, chilies and wedges of lime. Southern Vietnamese chefs brought their pho to the U.S. first and so it has become the standard here.

Pho Cali offers a slightly sweet rendition of the southern pho with a variety of textures and tastes with back notes of ginger, star anise and cinnamon playing out in the broth. Resist the urge to further sauce it, but deeply inhale the aromatics when the bowl is set in front of you.

Offered in two sizes, even the small bowl is enough for two.

But there is more to like at Pho Cali than soup. The fresh rolls, with the shelf life of five minutes, are sided with a yummy, but smooth, peanut sauce. In the heart of the menu is the colorful bowl of Bun Tom Thit (vermicelli) piled with aromatic herbs, crisp cucumbers, sweet shrimp and thinly sliced grilled pork and showered with crispy shallots and nuoc cham.

Also worthy of a go is the Com Suon Bo Dai Han. Although it says "Korean BBQ" this refers to the cut of the beef short ribs, not the style. These ribs develop their deep flavor from a fruity marinade.

It may seem counterintuitive to visit an ethnic restaurant within weeks of opening, but in Charlotte there is a reason to do so. Often dishes morph to match customers' expectations while the jewels on the menu may migrate to an expat menu or become lost altogether. I missed a chance for their Com Ga Hai Nam Dac Biet, the classic Hainanese dish popular in California of poached chicken and "oily" rice. The chicken is the same, but now it is paired with pineapple rice. Too bad. I should have visited sooner.