Are the Ronettes more than just another brick in the wall of sound? 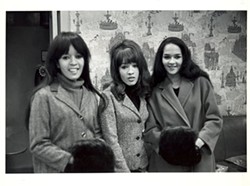 On March 13, 1960s' classic girl group the Ronettes will be inducted into the Rock 'n' Roll Hall of Fame. While the Ronettes had its share of hits, including "Be My Baby," "Walking in the Rain," "Baby I Love You," "The Best Part of Breaking Up," and "I Can Hear Music," unlike other the quintessential black-chick acts that defined the era, such as the Shirelles, the Chantels and the Supremes, it was impossible to wedge the Ronettes into a neat, homogenized racial pigeonhole.

The Ronettes' lead singer Ronnie Spector, born Veronica Eve Bennett, and her sister, Estelle, had a black/Native American mom and a white dad. The group's third member, Bennett cousin Nedra Talley, was a blend of Hispanic and black. Light-skinned enough to pass (in her autobiography, Spector recounts an incident in which she, Estelle and Nedra were already seated and being served in a Southern restaurant when their mothers entered, only to be told, "No blacks allowed"), the Ronettes' exotic appearance was a double-edged sword. Simultaneously rendering the group more mysterious, earthy, and ultimately, more sexy than their peers, it was arguably this very element of multi-ethnic incongruity that made them less acceptable to American Bandstand-programmed white mainstream audiences, who expected black performers to fit the mold of the narrow, well-defined roles and stereotypes ascribed them.

"There were girl group hits before the Ronettes," wrote Canadian critic Carl Wilson in a 2003 feature for the Toronto Globe & Mail, "but Ronnie Spector was the first woman in rock to provoke anything like the hysteria that Elvis had caused." Indeed, at one of the Ronettes' early Apollo Theater appearances, a race riot of West Side Story proportion nearly erupted as rival black and Hispanic gangs paired off in a turf war, each claiming these "sistahs" as their own.

Dubbed "the original bad girl of rock & roll," by her own account, Spector was more wild child than enfant terrible during the group's halcyon days at New York's Peppermint Lounge and legendary disc jockey Murray the K's Brooklyn Fox Theater rock & roll revues, but even then, she understood the impact of image. Whether carefully cultivated or not, the group's kabuki-esque persona of huge hair, tight skirts and impossibly lacquered eyes became their trademark. In her autobiography Spector says, "Being half-breeds, we were born different, so we figured the one thing that set us apart from the other groups was our look. We just took the look we were born with and extended it. A lot of people have commented that [we] looked Chinese. Maybe we did, but it wasn't conscious. If we copied anything, it was the girls in Spanish Harlem who walked around with thick eyeliner and teased hair. That's what we saw [growing] up, so we brought it into our act. Of course, we exaggerated it because everything onstage has to be bigger than life, but when people ask me where we got our street image, I always tell them we got it from the streets."

But the savvy teen also understood that style without substance was not enough to make it to the record charts, so like a beehived Liza Dolittle, she sought out the Henry Higgins the Ronettes required to put them over the top. It was a decision that would both elevate and haunt her.

That the group flourished and finally broke nationally, thanks to Ronnie's association with former husband and producer, "Wall of Sound" pioneer Phil Spector, goes without question. Under his wing, the group released its breakthrough single, "Be My Baby," and soon after, was touring as the number one-rated pop group in England, headlining over such acts as the Rolling Stones and Yardbirds, and sharing the bill with the Beatles on its final U.S. tour. That the Spectors' relationship eventually devolved into one of rock's best-publicized meltdown/breakups, as Phil famously morphed from mentor to tormentor, is also a matter of record. Yet with the union's demise, the inevitable question arose: Were the Ronettes a black group created by the dreams, vision and drive of a black woman, or were they merely a black girl group molded by the hand of a white Svengali?

While there is speculation that Phil Spector quashed earlier attempts to induct the Ronettes into the Hall of Fame, falling back on the old, "without me, they'd be nothing" refrain, in the end, there can be no question that it was Ronnie Spector who provided the raw talent, created the look, and set the events in motion that brought the Ronettes to the fore -- and it is she who may have the last word as her now infamous ex awaits trial for murder in California. In the cut, "Girl From The Ghetto," from her just-released CD, The Last of the Rockstars, Spector sings, "I hope your cell is filled with magazines/On every page there's a big picture of me/And underneath the picture the caption will read/Not bad for a girl from the ghetto like me."