An interview with the legendary musician has special meaning 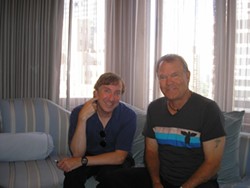 Often, when I see some compilation of music from the 1960s being sold on television — the Jefferson Airplane playing against images of dancing headbanded hippies — I can't help but feel you're not getting the whole picture.

Sure, there was great rock 'n' roll, courtesy of the Kinks, the Rascals and the Stones. Plus, there was stuff that could only be called rock, sarcastically, by the likes of those acid-damaged doofuses Iron Butterfly.

But there was another musical side to this tumultuous time — well-written, exquisitely-arranged pop that was apolitical and introspective. It was music you and your dad could agree on while he took you out for ice cream on a quiet Sunday. It was music by the Association, Spanky and Our Gang, Donovan.

By the end of the decade, it came from one artist in particular. A man who, it seemed, all the world agreed was great: Glen Campbell.

It started for most of us (those who didn't know Campbell had been an ace session man), with "Gentle On My Mind." When I tell you my father and I bonded over this poetic song, sporting a banjo, it sounds so quaint. It's like the next thing I'm going to tell you about is the day I saw my first "horseless carriage." But it was really just 1967.

Driving around with dad, we were both knocked out (people said stuff like that back then) by John Hartford's composition, which overflowed with free-verse, totally original images (who calls their beard a "roughening coal pile"?) and absolutely no mention of the war, protest or drugs. Which is probably why the tune, so sweeping and sad, still sounds so good today.

After this, my sister, Jill, joined the Glen Campbell fan club, too. Every few Sundays, you'd see him on The Smothers Brothers Show. My dad, Jill and I, sat together on the couch in the playroom, laughing at all the counterculture humor, but really waiting for that Southern '60s anomaly — clean-cut Glen Campbell who had hit after hit, culminating with his masterpiece, "Wichita Lineman."

The tune is about a lonely repairman, standing atop a telephone pole, wishing hopelessly he could be back with the girl he lost and literally loves more than life itself. That Sunday night on the couch, when Campbell finished that Jimmy Webb-written song, there was a lot of throat-clearing and people furtively wiping their eyes — even my dad, who never cried, not even after losing his brother in the war.

Flash forward to 2011. I am a humor writer who sometimes gets lucky and interviews his rock heroes. I got particularly lucky in July and was assigned a profile of my childhood hero, Glen Campbell. The whole thing is unbearably poignant.

My father has died. My sister is debilitated by a stroke. That should be enough, but no. It's been announced that Campbell has Alzheimer's disease. He's finished his final studio album, Ghost On The Canvas, and is promoting it. He will be happy to talk to me about it in New York City. I have talked to almost all the guys I idolize in rock. But, after accepting the assignment, I wonder if, even after speaking with Ray Davies, Paul Weller and Neil Young, I can handle a hang with Glen Campbell. The guy I use to watch on Sundays who co-starred in a Western with John freakin' Wayne. Who played with everybody from Spector to Sinatra.

Campbell was more than a great guitarist — someone who could play like Buck Owens one minute and Charlie Christian the next. He was, to quote Sinatra's old song, "America to me."

Still, after a sleepless night, I gathered my nervous courage and went. I got to the midtown hotel on time and was met by Bobbie, Campbell's rep, in the lobby. She was a pretty, dark-haired woman, who conveyed both the publicist's upbeat demeanor and that nervous vibe that things could wrong at any time.

I didn't think they would, but her shaky smile added to my building panic. Considering I felt like I was about to repel off of Mt. Rushmore and stare into Thomas Jefferson's face, I didn't need any more reason to be anxious. But being a trained actor, I came off as nonchalant as Peter Fonda in Easy Rider. It was time to meet Glen Campbell.

The suite was lovely but not overwhelming. It would have made a small clothes closet for Liberace. Glen's charming, blonde wife, Kim, came out of the bedroom. Bobbie introduced us. Then Kim said, "Let me go get Glen." I said, "Great." I could feel my breath starting to come fast and thought I should get into bowing position, but, before I could, out came Mr Campbell.

Except for some sleep smears on his face and his sandy hair a bit thinner than the old days, he looked just like Glen Campbell. Actually he was cooler. He had on a blue T-shirt, tight black jeans and black cowboy boots. He looked like a guy from an alt-country band, which made perfect sense, since he basically invented alternative country.

He said "Hey!" when we were introduced, in that rural-friendly way, asked for my name and we shook hands firmly. It was one of the first times I had to restrain myself from throwing my arms around him and sobbing, while trying to tell him what he had meant to me growing up and how much my dad had loved his music. That kind of shit happens when you get older.

I'm glad Kim stayed. I'm also glad that having dealt with people who had brain disorders, I knew how to handle the conversation. At first, it was panic-inducing. I'd ask Glen a question about, say, working with The Beach Boys. He'd start to tell me about the sessions, what guitar he'd used and about 20 words into it, he'd pause, forever. Then would come the words I was to hear often that afternoon — "What was I saying again?"

As a pot smoker, I was unfazed. This short-term memory loss was just like my being stoned and hungry. I remembered trying to leave my room about six times. And each time, I'd pause and think, "Where was I going again? Oh yeah, right."

Once I knew that this great singer wasn't messing with me, I just applied the principles I'd learned getting high and we were home free.

Glen told me about working with Spector ("He'd invite anybody in, hand 'em a tambourine and say, 'Go over there'"). And about the time he nearly drowned as little boy, with his uncle squeezing water out of him and his mama praying to Jesus, "Please don't take him now, Lord!" About how the first time he had John Hartford play "Gentle On My Mind" for him — "He was so slow, I thought he'd never get through it." And even though he told me he loved the Paul Westerberg-penned title song of his new album, it was the snatch of another song he sang, that had me surreptitiously wiping away the tears.

Three or four times that afternoon, Campbell suddenly began to sing, "See her how she flies/Golden wings against the sky." And even though Kim kept saying, "Honey, that's that old Jimmy Webb song," it didn't matter. And hearing that voice, untouched by time, limn the loss from "The Moon's A Harsh Mistress," told Glen's whole story. And mine, yours and everyone who had reached impossibly high, but still couldn't pull the moon down. If I had just posted those few lines on YouTube, I never would've had to write the piece.

The sun outside our window, was slowly starting to arc away from us. Bobbie, Glen's rep, softly crept up to us and gave me an eye, which gently said, "Wrap it up." Knowing Glen's condition was progressive and had only one end, I had to ask him, "Are you afraid to die? Do you think you're going to heaven?"

"Yeah, I think so," he said. "I was pretty wild there for a while, but I got straightened out. Especially with my marriage. So, yeah, I think I'm gonna be alright."

I made to leave. But first I had to shake Glen Campbell's hand. He must've felt the love and respect that I had for him, because he reached out and pulled me close and gave me a hug. The kind you give someone you know you'll never see again. Then, since I mentioned I played guitar, he slipped his hand into his jean pocket and handed me an autographed pick. My throat tightened. I'm sure the light from the sunset must've revealed my glassy eyes. I nodded at Glen. Then Bobbie said she'd take me downstairs.

We said goodbye and left. We just looked at each in the elevator, silently. Which was perfect. Because in that hotel suite, 10 flights up, everything important, everything worth saying, had already been said.