Put an egg on it

These dishes turn up with the perfect topper 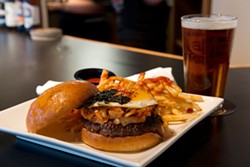 I fell for the golden, drippy center of nature's perfect food early in life. Every weekend, my father religiously made eggs with bacon. He would fry an entire pound of pork, then crack a few eggs into the hot grease, where the sizzle and pop would make the eggs dance inside the pan. A crisp brown edge would form around the amoeba-shaped masterpiece, signaling its doneness, the jiggly, sun-colored center still intact.

It was my father who taught me how to get down on that sunny-side up. After showering the entire plate in cracked black pepper, he would cut into the egg to release its bright yellow contents, dragging every forkful through the viscous yolk before finishing with his signature move — mopping the plate clean in deliberate C-shaped strokes with a slice of toast.

Today, my love for that runny, rich yolk extends well past the breakfast table. The addition of a perfectly cooked egg with a quivering center brings an instant savory richness to just about any dish and can transform the humblest plate of greens into a ready-made meal. Here are a few places in Charlotte using the modest egg to elevate the standards.

I can't think of a better place to put an egg than on a plump, juicy burger. At Nom Nom Burger, the Kalbi Burger combines all things umami and savory and piles them between a shiny topped brioche bun, slathered in spicy aioli and roasted garlic. The beef patty is soaked in a traditional Korean marinade (hence, the name Kalbi) for short ribs made mostly of soy, sugar and garlic. The burger is then topped with house-made kimchi, a fried egg and pieces of toasted nori. The folks at Nom Nom think ahead and remove the insides from the top bun to make way for the melty egg yolk and fixin's to soak into the bread. 1600 E. Woodlawn Road. Suite 170. 980-219-7233. www.nomnomburgers.com.

In some circles, this preparation is called "eggs in a basket" or "eggs in a hole." My mother made a similar dish when I was little, and it blew my mind. An egg cooked directly into the center of its bready companion? Genius! Fourth Ward Bread Co. goes to great lengths to make its own (rather flaky) croissants from scratch, which are then used as the vehicle for an egg cooked into the center with a mozzarella surprise lurking just beneath. 312 N. Graham St. 336-946-2072. www.fourthwardbreadco.com.

Chilaquiles is typically served at breakfast and is really just a more cultured way to say, "I feel like eating tortilla chips for breakfast." The dish is simple — fried tortilla chips or strips tossed in a chile sauce, topped with eggs and queso fresco. At Three Amigos, you can choose between a spicy red chile sauce or green tomatillo sauce. The plate is generously heaped with cheese and served with a side of refried beans. The key to this dish is the merging of yolk with sauce, cheese and tortilla grease for a trashy mixture that looks like a landfill pile, but tastes of hangover cures and hugs. 2917-A Central Ave. 704-536-1851. www.threeamigoscharlotte.com.

We may have stretched the runny egg analogy with this dish, but for good reason. The Fresh Linguine Carbonara at e2 is where the egg gets to work, instead of sitting pretty atop the dish for someone else to coax the oozy yolk out. Executive chef Brian Mottola begins with handmade linguine and duck bacon, which he cures and smokes in house. Garlic and shallots are sautéed with brown butter and tossed with the duck bacon and sweet spring peas. Next, he adds the pasta and plenty of Parmesan. Right before serving, an egg yolk is added for depth and classic lip-smacking richness. 135 Levine Avenue of the Arts. 704-414-4787. www.emerilsrestaurants.com/e2-emerils-eatery.

If an egg is found near a pile of lettuce, it instantly constitutes a meal. Fact. The new rooftop restaurant atop Skye Condominums takes this into account with a salad called Good Morning Charlotte. Frisée lettuce is dressed ever so lightly in a tangy craft beer vinaigrette and then topped with a single fried egg. Chef Rocco Whalen must have considered the importance of yolk consumption, because underneath the greens are small slices of buttered brioche layered with manchego cheese to catch and mop up the golden leftovers. Yum. 222 S. Caldwell St. 980-237-6718. www.chefroccowhalen.com/fahrenheit-charlotte.