Re-Invasion of the Spongetones

Sponge-worthy rockers still pay tribute to sounds of the '60s

"We were stars," Jamie Hoover says. "I'd go to a shopping center and people would come up and follow me around. I had girls driving around my house gawking. It was like we were the Monkees."

Hoover, guitarist for the Spongetones, is remembering the heyday of the veteran Charlotte power pop group. Soon after Hoover joined guitarist Pat Walters, bassist Steve Stoeckel and drummer Rob Thorne in late 1979, the Spongetones took off. Beginning as a cover band of 1960s tunes, the group soon began penning original tunes in the mold of their musical heroes. Evoking the heady rush of British Invasion bands like the Beatles, the Kinks and the Rolling Stones while adding their own all-American perspective, The Spongetones clicked with audiences in Charlotte and beyond. Critics for Rolling Stone raved about their 1982 debut Beat Music and its 1984 follow-up EP Torn Apart — for which R.E.M. provided handclaps. 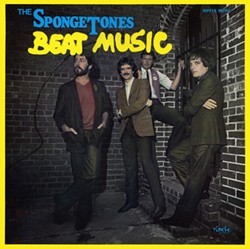 The band played high-profile gigs, including a spot opening for their heroes the Kinks. That may have been the commercial high water mark for the Spongetone's wave of popularity, but Charlotte's beloved power poppers never went away. In 2009, they played to big crowds in Tokyo, and in 2014 Thorne vacated the drum stool, making way for current drummer Chris Garges. After a recent hiatus, the band is back playing a July 1 gig at the Evening Muse.

The show will be a tribute to the British Invasion bands that inspired the Spongetones' musical journey, though Creative Loafing took this opportunity to request a few of the group's effervescent originals, like Stoeckel's composition "(My Girl) Maryanne" and "She Goes Out with Everybody," penned by Hoover. (Both are on the Rhino Records box set Children of Nuggets: Original Artyfacts from the Second Psychedelic Era, 1976–1995.)

We caught up with Jamie Hoover recently to discuss all things jangly and all tones spongy.

Creative Loafing: Local legend has it that you were at an early Spongetones gig at the Double Door Inn — and you wound up joining the group that night. True?

Jamie Hoover: I was a huge fan of not only the guys in the band and their abilities, but that era of music — The Beatles, The Kinks, The Stones, Dave Clark Five — all the stuff they were playing. I was a big fan of Pat Walters and his bands like The Paragons and The Good, the Bad & the Ugly. My friend Alan Kaufman and I were doing a recording session at Bob Davis Studios and he said one of the guys in the Spongetones was leaving, and I would be a good fit with the band. I said I'd love to do it. I couldn't figure any other band I'd rather be in. So we went to the Double Door after that session, and on a break I went up to Pat and he said, "Hey Jamie. I hear that you'd like to be in the band. You're in!" It was just like that. It was life-changing for me. That's how I got into the best band that I've ever been in and ever will be in.

We were playing covers and it was fun, but I had already recorded some things that were in the style of the Beatles. One song, "Tell Me Too!" ended up on the first Spongetones record. I had already recorded things like that. I said, "Why don't we record a single or something in that style, but make it be a new and original song?" This was before The Ruttles came out and before Utopia did their Deface the Music album. We were a little ahead of those guys in that. Most of the press in Charlotte did not know what to think of that. They thought we were an embarrassment. "What are these guys doing? They're trying to sound old!"

Listen to the Spongetones do one of their most-loved tracks "(My Girl) Maryanne," from their 1984 album Torn Apart:

What was the most memorable gig you played with the Spongetones?

God, we had a bunch of great ones. The Spring Fest shows that we did at Freedom Park were amazing. For a couple, we had over 30,000 people out there. We would also book shows on our own. We would decide to do a concert on Mother's Day or Father's Day, and then we would enlist a radio station to help promote it. The radio station would cop the glory for it, but we actually thought it up. A WBCY-FM show with [Rolling Stones session player and keyboardist] Nicky Hopkins — that was one of those. We did a big thing at Clemson one time. There was rumored to be 70,000 people there. The gig at [New York City punk mecca] CBGB was also really cool. It was awesome to be able to play there.

One of my favorite gigs was at a place called the Mad Monk in Wilmington. That was when [writer] Parke Puterbaugh from Rolling Stone came to watch us play, and he decided to review our first record in Rolling Stone. Actually, he tried to give it a four star review. They made him bump it down to three and a half because we were unknown and didn't have a major label deal. That was an incredible gig. People were literally hanging from the ceiling.

You've released at least five solo albums, and you've toured with Graham Parker and Don Dixon. If you had to pick a highlight, what would it be?

I did a record called Jamie Hoo-Ever, which was the name I was credited on for a John P. Kee gospel record. John P. Kee is a big gospel guy based around Charlotte and this was a No. 1 Billboard record, and I engineered part of it at Reflection Studios. Instead of putting Jamie Hoover on the credits, they put down Jamie Hoo-ever, and I thought that is just too good. I have to use that. It was just a typo, or somebody didn't know how to spell Hoover, which is odd, because it's not an uncommon name. So it's on the record and it's so funny.

I had done lots of compilation records where people would say they were doing a Bobby Fuller Four tribute album, or a Klaatu [tribute] or a Todd Rundgren [tribute] or whatever. So I had lots of solo things on those. Then I finally said, why don't I pull all of these together and just call it Jamie Hoo-Ever?

The Spongetones have gone on hiatus now and again. What prompted the latest get-together and the upcoming show at the Evening Muse?

We've been together 39 years. We didn't have an intentional hiatus. The most pressing thing was that we had a couple surgeries in the band that we had to get over and give people time to recuperate. We played gigs in Southport a couple of weeks ago and we did two shows in February. What prompted these latest shows was this: We still played really great and everybody realized they still enjoy this. And I realized that at some point it will be over. One of us will die, or a serious illness will set in and somebody won't be able to do it.

I think it's important to keep doing this. I'm kind of like the black knight in Monty Python and the Holy Grail that's hopping up and down on one leg after all his other limbs have been hacked off. "It's just a flesh wound." I know I'll really regret it if I didn't play with those guys when I could. Most musicians would pay to be in a band like the Spongetones. Just because we do solo things doesn't mean we don't love each other. We really love each other.