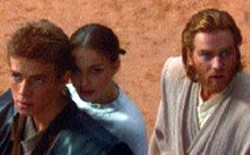 Ever since the release of the original Star Wars back in 1977, creator George Lucas has repeatedly acknowledged that the primary inspiration for his space odyssey was Akira Kurosawa's The Hidden Fortress. At the same time, fans have also noted the similarities to Flash Gordon serials, epochal Westerns and any number of swashbuckling yarns. But who would have guessed that the latest film in the saga, Star Wars Episode II: Attack of the Clones, would readily bring to mind All the President's Men?

Political intrigue is the order of the day in the latest chapter of this blockbuster franchise, but fans need not worry that Lucas has churned out a C-Span feed with droids instead of drones. Attack of the Clones is many things: a rock-solid mystery yarn, a shaky but ultimately affecting love story, an edge-of-the-seat action flick, and, perhaps most importantly, a vast improvement over its 1999 predecessor, The Phantom Menace. Whereas Menace too often felt like an island unto itself, detached from the first three films in the series, Clones largely brings everything together, deepening the arc of the entire story by including several important (and occasionally unexpected) developments and restoring the mythological grandeur that helped establish the series in the first place. Oh, and let's not forget that it's simply a lot of fun: More than even Spider-Man, Attack of the Clones provided a welcome rush of nostalgia by reminding me what it felt like to be a kid at a matinee showing, marveling at the sights and sounds presented before me.

In truth, The Phantom Menace isn't as bad as its reputation; it's simply that, because expectations were understandably sky-high, the negatives tended to leave a more permanent aftertaste than the positives. And nothing in the film earned more negative grousing -- well, out-and-out hatred, to be accurate -- than the character Jar-Jar Binks, that computer-generated abomination who seemed to be equal parts Jerry Lewis and Stepin Fetchit. Yes, Jar-Jar does reappear in Clones -- what's more, he's even a Senator of the galactic council! Seeing the befuddled Jar-Jar attempt to expend thought on political matters will doubtless remind many viewers of the Reagan years, but in his defense, not only does Lucas limit the amount of screen time afforded to J-J but he also uses the character to advance the storyline in a way that's not only ingenious but that also cruelly serves as an affront to the character's upstanding morals (those accursed Ewoks as evidence to the contrary, it appears that Lucas has retained a smidgen of that maverick, devil-may-care spirit that informed his earlier works).

With Jar-Jar a mere footnote, Clones can deal with the real business at hand -- namely, detailing the demise of the Republic while simultaneously charting the development of Anakin Skywalker, the Jedi knight who would eventually embrace the Dark Side of the Force and transform into the all-powerful warlord Darth Vader.

Set 10 years after Episode I, this one finds the members of the Jedi order doing their best to quell the unrest within the Republic that's being stirred by the machinations of a separatist movement out to dismantle the government. (If this all sounds incomprehensible, you might want to brush up on your history by renting the other four flicks.) After an assassination attempt is made on Padme Amidala (Natalie Portman), the former Queen turned Senator, the Jedi send two of their own, master Obi-Wan Kenobi (Ewan McGregor) and apprentice Anakin Skywalker (Hayden Christensen), to serve as her protection. While Obi-Wan travels to distant worlds to track down the mysterious figures behind the insidious murder plot, Anakin stays close to Padme's side; naturally, the close contact results in the pair falling in love, a major no-no since Jedis are forbidden to become intimate with others.

Clones sows the seeds for the luring of Anakin over to the dark side, but that's not all that's on its plate: We also witness the birth of the stormtroopers, the introduction of the bounty hunter Jango Fett (Once Were Warriors' Temeura Morrison) and his young son Boba, more prominent roles for Jedi warriors Yoda and Mace Windu (Samuel L. Jackson), and the beginning of the beautiful friendship between R2-D2 (Kenny Baker) and C-3PO (Anthony Daniels). There's also a certain poetry in the casting of Christopher Lee as separatist leader Count Dooku: The late Peter Cushing, Lee's close friend and frequent co-star back in the glory days of Hammer horror flicks, appeared in the first Star Wars picture, so Lee's presence here is especially gratifying. In fact, there's not much about Clones that doesn't satisfy: Even some leaden dialogue and a couple of stiff performances can't undermine the overall exuberance generated by its deft mix of effects and angst.

McGregor's underrated work in Menace found him expertly copying the mannerisms and speech patterns that Alec Guinness established while portraying the elderly Kenobi in the original trilogy; he's equally good here, making it easy to believe that this resourceful yet slightly fuddy-duddy warrior would evolve into the wizened wizard we saw in the other films. Little Jake Lloyd got hammered for his wretched work as the adolescent Anakin in Menace, but Christensen will fare better as this chapter's teenage version of the character. He struggles with some of the wooden dialogue (who wouldn't?), yet he's adept at swinging through the role's various mood changes. Yet while I felt Portman was unjustly criticized for her part in Menace -- I thought her lack of emotion suited the part of a queen with a dispassionate demeanor -- I may have misjudged that one: She's equally stiff in Clones, despite the fact that Padme is feeling great surges of romantic ardor.