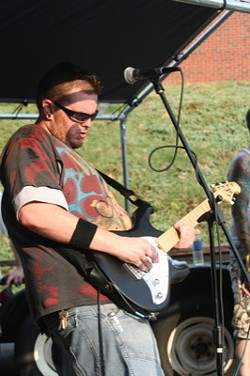 On Aug. 19, in the heart of Plaza-Midwood, four bands and roughly 100 people gathered to pay tribute to a loved one. The one quote heard most during the five-hour event was, "This is such an awesome thing, but such a terrible reason to have it."

The event, held at MMR Custom Bike Shop, was for Christiana Hendrix, wife of Belmont Playboys singer Mike Hendrix, who was killed in a motorcycle accident in July. Those gathered exchanged handshakes and hugs, shared a few tears and stories, and enjoyed the music and camaraderie. The sales of food and drinks, as well as the proceeds from a silent auction, all went to the Hendrix family.

The generosity was somewhat overwhelming to witness, as was the generosity of hearts. Bands saying, "We're here for you, Mike" or offering thanks to him for the years of the music he's contributed to the city.

While some faces at the gathering were the usuals you'd see at live shows, there were also those who came to show their support. I even saw a few people visit simply to make donations and leave. Simply put, it was the Charlotte music scene at its best.

Most in attendance were surprised when it was announced the Belmont Playboys would be performing a few songs at the end of the night. With most Parodi Kings and Belmont Playboys gigs cancelled for the near future recently, it was assumed it would take some time for Mike to pick up the guitar again.

However, when The Aqualads wrapped up their set, The Playboys hit the pavement for a hard-charging 30 to 45 minutes in the dimly lit lot. After the second song, Hendrix noted, "I thought this would be a lot harder..." He dedicated the set to Christiana and paid tribute to her with a number of songs, including "One And Only," and shared stories of her disapproving ear for his instrumentals.

The day's show started with the alternative rock of Mego Dirge. The Nirvana influence was apparent (in more than lead singer Josh Meyer's t-shirt) and the band offered a good start to the day. The trio falls into a grunge category without sounding dated.

Drat was the second to perform in the simple parking lot setting. The punk band was a perfect fit for the afternoon heat and hot rods. David Childers played some good rockabilly (without the stand-up bass), but stopped short after having some PA problems. The Aqualads' instrumental surf rock capped off the scheduled performers.

Hendrix noted during the Playboys' set that it's been an understandably rough time, but that the support he's received has helped keep him propped up. It was a fitting tribute for a music fan and the "woman behind the man" of one of Charlotte's greatest musical accomplishments.

For many people, music is good therapy. Hopefully, for Mike, the support of a community and music that surrounds him will help to get him through the tragedy the best that it can.

Latest in Turn On, Tune In