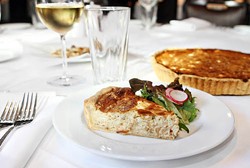 Quick. Name five French restaurants in Charlotte. Now note that three of these are within walking distance of each other. SouthPark has become the premier arrondissement of town -- without the Louvre, Tuileries and open air markets, of course.

Why SouthPark? This part of town has always favored things French -- wine, good food, and, um, did I say wine? Raleigh restaurateur Giorgio Bakatsias, a native of Greece with several dozen restaurants under his belt, opened Georges Brasserie in Piedmont Town Center last April. The space, once Oceanaire, is a whopping 400 seats, 100 of these on the extensive patio.

The interior, not overtly Francophiled, has been remodeled. The posh curved red booths remain and the first thing you notice when you sit in one is the room doesn't feel brassy or dated anymore. Perhaps it's the change of palette, or the expected black and white photographs. Tables are set with linen and then covered with practical white paper -- not butcher paper -- just paper, oddly enough. The room is warm, not quaint.

The menu at Georges isn't High French or New French. It's classically modern French, replete with a mix of what Julia might expect -- trout amandine, beef bourguignon, and onion soup gratinée -- and what you might expect in a less showy bistro -- cassoulets and a simple roasted chicken breast. Banished is boom-era foie gras, but escargot with pastis has made it to Georges' permanent menu, while frog legs are a frequent special. Executive chef Andrew Perno, a graduate of the French Culinary Institute in Manhattan, uses his education by leading the kitchen in producing nod-worthy dishes.

The first arrivals from the kitchen turned out to be their tour de force. The kitchen finesses the overly familiar -- a frisée salad studded with lardoons, bits of potato, and a poached egg -- with a flavorful, roasted shallot vinaigrette. An entrée-sized pot of mussels in a traditional white wine sauce were near perfection, but were soon eclipsed by the pièce de résistance, the stellar goat cheese and caramelized onion tart, which literally melts in the mouth.

In the manner of most restaurants, some dishes work better than others. The ratatouille is done quite well, but perplexingly straddles on a heavy helping of polenta. Better is the opulent braised lamb shank dressed in tomato confit and chopped basil gremolata.

Our server could barely contain herself about the pastries on the dessert list. However, we were less than enthused when the profiteroles arrived filled with run-of-the-mill vanilla ice cream and bathed in a too-familiar-tasting chocolate syrup. For a menu that works so hard up to this point, the finale is a disappointment. Sacré bleu!

Service also needs some tweaking. Although servers are pleasant and informed, they move around the dining rooms with more smiles than help. I found myself asking for bread and pouring wine.

Georges' international wine list thankfully has many currently shunned French wines ("But I can't read the label: It's in French," my friends whine). Sancerre is one of these wines. When I think of Sancerre, the voice of my WSET (Wine and Spirit Education Trust) teacher echoes in my mind. You cannot help but love this wine as the word flows from your mouth. Not in love? Say it slower. Sancerre is unlike the citrusy Savvies from New Zealand. Sancerre has that hint of mineral, a quality of French wines, which seduces even the most pampered palate. If you have a problem committing to a bottle on Georges' list, a selection is also sold by the glass.

Now that the double dip recession has ushered in reasonably priced entrées, it is reassuring to see the majority of entrée prices here costing less than 20 bucks. Ones that go beyond that are to be expected: the bouillabaisse ($23), New York Streak au poivre ($25), and a $29 veal chop. From the raw bar is the "Grand Plateau" with a whole lobster, a dozen oysters and mussels, eight shrimp and clams for $70. Lunch prices range from $9 for a lamb sausage sandwich to $15 for a hanger steak with bleu cheese, fries and a salad.

Georges Brasserie strikes the balance between bistro intimacy and old-fashioned French grandeur, and the majority of dishes are worthy of frequent visits.

Know of a restaurant that has opened, closed, or should be reviewed? Does your restaurant or shop have news, menu changes, and new additions to staff or building, upcoming cuisine or wine events? To be included in our online blog, Eat My Charlotte, send information to Tricia via e-mail (no attachments, please): tricia.childress@creativeloafing.com.