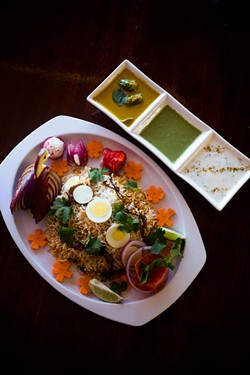 The truth about the way we approach ethnic cuisines is that once we select a favorite dish, such as pad Thai in a Thai restaurant or sushi in a Japanese one, we return to it, again and again. Thus, any restaurateur worth his or her salt will include these expected dishes on the menu — despite that eatery's focus on a cuisine from an entirely different region of that country or even a neighboring country. Pad Thai on a Vietnamese menu? I've seen it.

For Indian restaurants, that ubiquitous menu item is chicken tikka masala, a lush, admittedly addicting dish of uncertain parentage. It's now so omnipresent that a frozen version awaits you at Trader Joe's.

Although various Indian cuisines have become the fill at gargantuan lunch buffet tables, what is missed, of course, is the immediacy of cooking. Indian cuisine, the original spice kitchen, should leave us a little heady with irresistible aromas emanating from a plate. Our taste buds should be assaulted by its rich contrast of flavors.

Many of these uniquely Indian flavors are obtained through slow cooking. Slow-cooked rice dishes, such as biryani, is the signature comfort dish of Hyderabad, a city of almost 7 million considered the Indian version of Silicon Valley and the native home to many of Charlotte's Indian ex-pats. Hence, a restaurant featuring biryani would, in all likelihood, gain vast customer support in Charlotte — it's the reason that after owner Naveen Mallipedi opened his first Persis Biryani Indian Grill in Ballantyne 18 months ago, he opened a second store in the University area last summer.

In Ballantyne, the 72-seat Persis occupies a snug little space near other eateries in a perfunctory retail strip. The interior is hardly the gilded big-money dining establishment so many Indian restaurants yearn to be. Yet while the dining area is simple, the service is impeccable.

The biryani at Persis is made through a franchise agreement with the New Jersey-based Persis Biryani. The biryani cooking vessel and ingredients for that dish is proprietary. All the other dishes on the lengthy menu are created locally at Persis. Manager Bhim Thapa, formerly of Blue Taj, divides the menu into a dizzying number of sections (seven-plus dessert), each of which is packed with enough relentlessly hearty food that take-out boxes dot most tables.

The chicken biryani at Persis is a thing of beauty. It is said that during the biryani cooking process, the rice dances with the other ingredients. Indeed, the basmati radiates the flavors of caramelized vegetables, spices and herbs from within and is a dish at once delicious and soulful.

The Persis menu also dabbles in the major cuisines of India with a roundup of familiar suspects: chicken tikka masala, butter chicken, lamb rogan josh and goat curry. Additionally, many South Indian dishes are featured on the menu and with events. "Dosa Dosa," a crêpe fest held every Thursday night in the Ballantyne location, offers 22 varieties of dosas, most of them vegetarian.

You can distract yourself, though, with ordering strictly from the starter menu. Try the crispy samosas, tender pieces of tandoor chicken imbued with smoke and spice, and hot-to-the-touch roti and kulcha bread baskets.

Some entrées originate from lesser known and less represented Indian cuisines. A fiery chicken Chettinad curry laced with coconut, cardamom, cinnamon and chilies is the chef's signature dish. Chettinad cuisine is among the hottest in India, but you can reduce the chilies. Persis offers a spice range of one to six, with two (in my estimation, the heat level of serrano chilies) described as medium. I suspect that a six, or "Indian Hot," may require a flight of mango lassies or Indian beer, several restorative gasps of air and a cold water IV to extinguish the burn.

Persis Biryani is an accessible operation courting expats and others alike. A successful restaurateur will follow the old saw: Give the people what they want, and then serve the food you want. But if you're good, you can serve both at the same time — as they do at Persis.