Pastry chef Sadruddin Abdullah never even baked a cookie until he was 42. But he hasn't stopped since.

A former Johnson and Wales student-turned-instructor, Abdullah is the owner of the popular Cafe Gnache food truck, where he, his wife and his children make and serve deliciously flaky crossaint-donut hybids called kronuts that have Charlotteans on a sugar rush. Abdullah says he traveled the United States with his family to further his education, expand his palate and feed his passion for the culinary arts, and credits much of his education about food to his exposure to the kind of diversity only travel can offer. 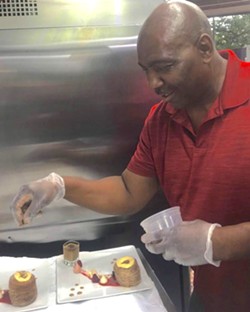 We caught up with Abdullah after his lunch rush one recent afternoon to talk kronuts and to find out why he thinks leaving the Queen City for a while can make living here that much sweeter.

Creative Loafing: How did you go from never baking a cookie to becoming one of the top pastry chefs in Charlotte?

Sadruddin Abdullah: Well, I never planned to go into culinary arts, but I always loved the arts. Back in high school I studied figure drawing, pottery, painting and sculpting, but when I met my wife I figured the best decision was to join the Air Force to provide stability for our growing family. I ended up getting stationed in Anchorage, Alaska, where I randomly met this guy named Frenchie one day in the mall. He was demonstrating the art of blowing and pulling sugar and I immediately became fascinated with it. For some unknown reason Frenchie kinda took me under his wing and taught me a lot about the art of sugar. That lit the spark. From there I went on to study at some of the top culinary schools in the nation, working and learning from some of the best chefs from all over the world.

My family and I always motivate each other to do better and push for greater things, so they got in on the action, too, taking up studies in culinary arts and business as well. We traveled from Alaska to Providence, R.I., to further our education at the prestigious Johnson and Wales culinary school. The educational benefit for our family was huge, and our experience levels continued to grow. Eventually we decided to move to Charlotte where we are today. 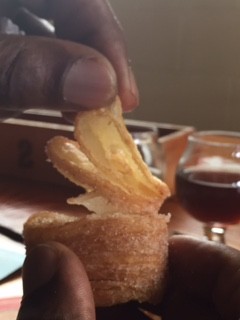 Your kronuts recently won the top award at the Charlotte Food Fight with a unanimous perfect score. For those who may not know, what exactly is a kronut?

A kronut is actually a cross between a crossaint and a donut. Crossaints are considered the epitome of the art of pastry making because of the time and difficulty of making them. Ours are made totally from scratch and the dough itself takes a total of three days to prepare before we can even get started. We literally spread hundreds of layers of butter and dough, one after the other, to give our kronuts the perfect light and flaky texture, then finish by deep frying for that perfect light crunch on the outside.

People really love them and I think what makes them so good is the technique and time we put into them, and again, the artistry.

You live in Charlotte and have a successful business here, so why do you recommend that your culinary students move away?

When I was teaching at Johnson and Wales here in Charlotte I would often tell my students to get away from here and travel. Sometimes that got me in trouble, but my job was to teach and I had to share what I knew to be true.

For my family and me, traveling and being exposed to people of different nationalities, different flavors, ingredients and techniques, absolutely influenced our style and gave us a competitive advantage. If I hadn't gone to Anchorage and met Frenchie, I would've never even gotten into the culinary world. People love Charlotte and they love talking about the potential, but we have people living here who have never even left the area.

I say go travel, see the world, then bring what you learn back here to make our city better. That's what's gonna make Charlotte the kind of world-class city we know it has the potential of being.