Selling the South to Southerners

Taylor Swift, Nashville and the uncomfortable rise of redneck TV 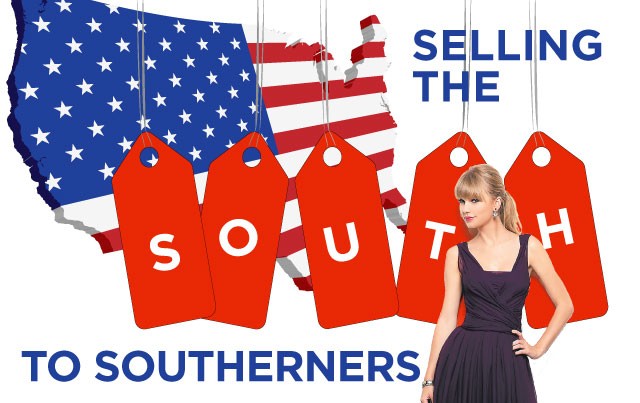 It's been seven years since a barefoot Taylor Swift tiptoed onto a front porch in her video for "Our Song" and embedded herself — thick Southern accent and all — into major pop stardom. The crossover pop hit was damn near inescapable at the time, though it plainly originated in the country world. From the peeled paint on the video's porch set to the guitar-banjo-fiddle intro and the sweet way Swift sang "play it again," this Nashville-polished song screamed Southern roots and a clean-cut, family-friendly, Grand Ole Opry tradition — though, in fact, Swift had only relocated to Tennessee from Pennsylvania three years earlier.

Does it matter if a country girl with a Southern accent isn't really country or Southern? If not, then why does Taylor Swift get a pass for adding a twang to her voice and using Southern signifiers like g-dropping and vowel fronting, while Joe Biden — also a Pennsylvania native — catches scathing criticism for uttering our beloved second-person plural pronoun, y'all?

Perhaps it's in the packaging: Biden is the vice president and Swift is a product of Nashville, where stars are fairly aggressively marketed with Southern signifiers. Not that Nashville is the only culprit these days. In reality TV shows like Duck Dynasty, Here Comes Honey Boo Boo and Moonshiners, Southern signifiers are exaggerated to death — and all for ratings. While stereotypes of buck-wild huntin' buddies, doe-eyed debutantes, obese single-wide residents, barefoot founts of folk wisdom and roadkill recipes may make for easy publicity, does anyone have absolute rights to these tropes?

Is so-called redneck culture exclusively Southern, or have we merely been told it is? More importantly this week: When Taylor Swift, who got her big break summoning rural ideals in "Our Song," plays the biggest stage in Charlotte on March 22 at Time Warner Cable Arena, is this northeastern native actually selling the South — to Southerners?

Swift was 14 when she moved from Pennsylvania to Nashville, drawn by the bright lights and big boots of the country music world — not to mention the promise of an artist-development contract. But her story isn't really all that unusual. Shania Twain came from Canada and Keith Urban from Australia, although both cop a Southern accent when they sing. And while Swift at least has dropped some of the twang in recent years, the Nashville hit machine that nurtured her, Twain and Urban certainly cashes in on explicitly Southern forms. With the rock and hip-hop worlds now largely decentralized into clusters of indie labels, big-time country is one of the few major music industry monoliths left standing. And Nashville continues to rely on its regional anchor — even if, in some cases, it's pure illusion.

Right now, Swift effectively owns Nashville. At not much older than your average college grad, the multi-millionaire lives in a penthouse overlooking the Tennessee city that has been her launch pad to 150 awards, including seven Grammys, six Country Music Awards and 11 American Music Awards. And her star shows no sign of dimming; even as she steps further away from country and more toward pure pop and buys second and third homes in Hyannis Port and Los Angeles, her gee-golly, rural, girl-next-door image remains somehow untarnished.

It may be that the qualities so long identified with the South have become universalized. Even "Our Song," with sharp-twanged lines like "it's late and your mama don't know" and references to "ridin' shotgun," could just as easily be about girls from anywhere in the U.S. where there are phones, cars, and young lovers looking to hook up.

"She is 22, but this song belongs just as much to the preteens and power moms who pretend to be that age," Entertainment Weekly's Melissa Maerz wrote of Swift's latest song, "22," in a review of the singer's 2012 album Red — a set of music with more pop and less country than her earlier outings. That everywoman appeal can be Swift's most endearing (or excruciating) quality.And a big part of that appeal may be in the purposefully simple look she sported in her first video: a sundress and cowgirl boots.

It isn't just the country music world that banks on such "down-home" signifiers, though. Southern identity is so hot right now. Look no farther than reality TV, which teems with alligator wrestlers, child beauty queens and teen moms from Tennessee and coastal North Carolina. It seems the South is everywhere you look — or at least an exaggerated entertainment industry version of it. While the people portrayed in these series are ostensibly real, the camera's relentless focus on "hick" outliers offers short shrift to the everyday South.

The people behind these reality shows see it differently.

"There's something silly and funny about the Southern redneck, the hillbilly," Robert Galinsky, a media trainer and founder of the New York Reality TV School, told the Daily Beast's Tricia Romano in December. Romano's piece quite transparently took an outsider's view — specifically, a Northeastern view — of the South, but the shows she addressed draw a national audience. When a show like Here Comes Honey Boo Boo, say, is unleashed on TLC, it's marketed to the urban Northeast and the West Coast, sure, but also to the Southeast and the Heartland — those other places. When that happens, Southerners are effectively sold inaccurate pictures of their own backyards.

"There's a sense of discovery and delight to seeing these stereotypes that we may have heard about and read about. That they are real," Galinsky told Romano. "They are not that small percentage of what people think that population is like." If that isn't absurd enough, Galinsky further discredits himself in his defense of MTV's Buckwild, a show that follows a group of young West Virginia delinquents as they — you guessed it — go "buck wild." In his rebuttal to West Virginians unhappy with how the show presents their home state, Galinsky doesn't even get the name of the state right: "As much as the people in Virginia are complaining how they are being misrepresented, they are not. Those people are real. They exist. They are from Virginia. They are mountaineers."

Galinsky's garbled, geographically challenged interpretation of the South is only the most obvious side of the stereotype coin. Near the end of her piece, Romano slipped into an editorial fugue, constructing an idyllic, pre-modern image out of the bizarre hyper-South of shows like Duck Dynasty and Honey Boo Boo. "There's something weirdly nostalgic about these shows," she wrote, contrasting the shows with her own professed postmodern, over-educated demographic and fractured, Information Age, Jay Gatsby lifestyles. "They recall a time when families ate dinner together, when friends played outside in the woods instead of on their computers, when families stuck together instead of moving cross-country, even when they annoyed or even hated each other." 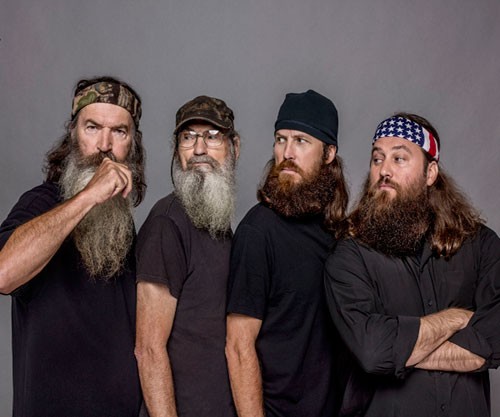 This fantasy world of pre-tech nuclear families — commonly known as "simple folk" — is potentially more reductive and patronizing than the outright human zoo approach of presenting the heavily bearded fellows from Duck Dynasty or Honey Boo Boo's overweight mother (and her spaghetti-and-ketchup dinners) as some sort of deep-fried sideshow. As with all backhanded compliments, Romano's yearning for a heavily mythicized pre-modern past cheapens the idealized region, dehumanizes its residents, and paves over the complexities of life in the authentic modern South.

"Even Honey Boo Boo, it is a nuclear family," TV historian Tim Brooks told Romano. "It's an overweight nuclear family; it's a redneck nuclear family. But it's a family. And that's reassuring in a world where there is fewer and fewer of those." Yet the US Census Bureau's 2012 statistical abstract shows North Carolina's divorce rate as consistently higher than the national average – a phenomenon that holds true across much of the South. (Some of the lowest rates, it's worth mentioning, are in New Jersey, New York, Pennsylvania and Massachusetts.)

The story told by reality TV, apparently, holds on to the opposite of the truth with snapping-turtle tenacity.

So do country hits like Mark Wills' "19 Somethin'" or North Carolinian Bucky Covington's "A Different World," both predicated entirely on soft-focus nostalgia for "simpler times." Like reality TV, Nashville similarly paints a pleasingly humorous and digestible illusion of the South. The difference is that these tracks idealize the past, rather than following reality TV's simplified present. While on the surface it's a bit silly to hear someone born in the late-'70s declaring that kids in the '80s didn't play video games, there's still something universal about Covington's ode to childhood and relative innocence. And, importantly, songs like his "A Different World" are written from the perspective of a modern Southerner just as torn between love and hate for the ultra-connected modern world as anyone from the Northeast or West Coast.

The sundress-and-boots getup that was Swift's trademark for years followed the same visual rhetoric — that she hailed from a simpler place; from simpler times. And, in a perfect world, perhaps that could be accepted uncritically. And perhaps the same could go for the astonished face she dons at award shows and during long ovations — though, as ex-Washington Post music writer Dave McKenna observed in a 2010 live review, Swift often milks her audiences for applause. "For all its high points, Swift's live show is hampered by artifice," McKenna wrote. "At several points, she did nothing but stand and stare at the crowd, just to keep post-song ovations going and going and going."

McKenna doesn't deny Swift's fury when she's laying into some ex in one of her trademarked wounded anthems, and he isn't alone. Huffington Post's Mesfin Fekadu wrote that the singer's newer, more pop-leaning material on Red sounds empty because it lacks such vivacity: "There's nothing close to the country-soul ballads."

Ironically, it seems Taylor Swift is at her strongest when she's true to her roots — even if those roots were borrowed. In light of the self-aware buffoonery of the fraction of Southerners represented on "redneck TV," Swift is at least the lesser of two evils — and at most, hell, she's probably become a Southerner by now anyway. She's lived here since she was 14. And if she is, indeed, selling the South to Southerners, it's ultimately up to us to decide whether we'll keep buying it.