For some transient Charlotteans, illegal encampments preferable to "prison"-like shelters 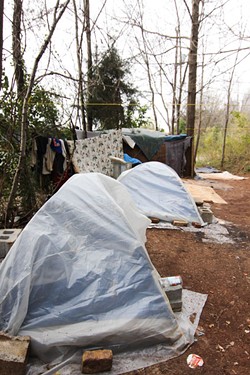 There are approximately 50 homeless encampments in Charlotte at any given time, said Darren Brown, a medical-outreach coordinator with the Urban Ministry Center, a homeless resource center.

Small groups can be found across the city, but the largest clusters are near North Tryon Street, just outside of Uptown and close to the Urban Ministry Center, the Men's Shelter and other homeless resource centers. Encampments can be filled with anything from tents to crude shacks, much like Bernard Hernandez's.

Charlotte-Mecklenburg Police Department sometimes emails Brown with information about new encampments. He'll visit and bring blankets and other amenities to hand out while looking for people with disabilities who need treatment. CMPD meets with people in the encampments, encouraging them to take advantage of shelters.

"[Encampments] become a safety issue," said Greg McTigue, a CMPD officer who works closely with the homeless population. "We don't want them outside in tents and [self-made] shelters. There are so many amenities for them at the shelter and some of them just won't go."

Earlier this year, two men were medically treated and then arrested after stabbing each other at an encampment near the Men's Shelter. Illegal drug use is also common. Brown said that about 10 percent of the encampments that he is aware of are "drug camps," which people build to have a place to use without being bothered.

"If [homeless people] are not doing anything productive, they might end up in one of those camps, and if drugs or alcohol is your thing, that's a quick source to obtain it," said Brown.

Once the police become aware of a "drug camp," it is usually cleared out quickly. But the legal process becomes more confusing when illegal activity isn't taking place at an encampment. To charge someone with trespassing on private property, the owner has to be present with a police officer when the squatters are initially told to leave.

"We try to reach out to the owners, but it is beyond our control if they don't take a stand," said McTigue.

On March 5, police officers forced everyone out of the encampment where Hernandez and about four other people lived near Parkwood Avenue.

The encampment was built on the Men's Shelter's property and people living in it had been warned by staff previously that they had to leave.

Days after the March 5 raid, Bobby Davis, a 61-year-old man who said he had lived in the encampment for eight years, wandered around the area where the huts and tents had stood only days before. He was staying in the Men's Shelter at the time but spoke of his desire to find a new encampment to live on his own.

"The shelter is like a prison," he said. "We just wanted freedom."