SOUP for the Soul 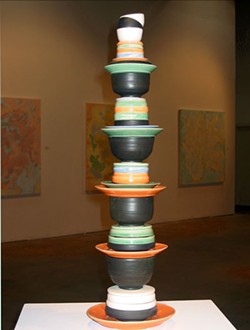 In the big, big space of the Hart Witzen Gallery, SOUP, a compelling invitational show featuring eight artists from our area, proudly resides through the first weeks of May. With hundreds of square feet of space and high industrial ceilings, the gallery provides an excellent venue for the work of several competent artists.

SOUP features the works of Selena Beaudry, Jennifer Gilomen, Benjamin Schulman, Sarah Hendershot-Simpson, Kit Kube, Joel Morris, Felicia Van Bork and Clayton Venhuizen, and these eight named the show after the concept of Stone Soup, a folktale about people who concoct soup from many ingredients during lean times. The variable 3-D work and admirable paintings currently on view in SOUP hang together well as a whole and also leave room for smaller, tighter displays of individual vision.

Whether presenting a carefully honed and practiced personal vision pursued over several years -- such as Felicia Van Bork's amazing, encaustic landscape paintings, which form a charming small show of their own -- or displaying a more Dada approach to painting by incorporating chance into the shapes and colors of paintings -- like the pieces by Clayton Venhuizen -- most of the work is strong and non-derivative.

The strings supporting the infrastructure of Jennifer Gilomen's "Delaying" are beautiful in the way they combine sunlight, a skylight, a section of space and the room; with some sharpened tweaking to reveal the delicacy of detail in the shadows falling on the floor, the piece could be magical.

As the prospective Emily Dickinson of visual art, Ms. Gilomen could use a visually quieter place to blossom fully. Much as I like seeing the South Carolina artist's intense, delicate works inside the larger setting, I'd like to see an enclosure of sorts, where "Delaying" could have more shadow control, making nuances visible, and where the subtle surfaces of "Furrowing," a piece on paper, would not be lost in the bouncing light of the larger space.

I'm not joking when I say that if Benjamin Schulman's tall, carefully positioned porcelain stacks of cups and saucers were architectural models, they would probably make better buildings than some of the high rise residential models and drawings I saw recently in the new Spanish architecture at MOMA. I realize that implying architecture was probably not Schulman's intention, and I learned that the artist was actually inspired by stacks of dinnerware he saw balanced by waitpersons when he lived, and dined, in Korea. These bright industrial green, vermilion and yellow ceramic dish "towers" are just the right height in their setting.

Similarly devoted to mass-produced factory colors, Clayton Venhuizen's series of clever, organically shaped two-dimensional blobs on the wall seem to be totally explorative: Venhuizen's scattershot approach to shape and display is less disciplined than Schulman's. To a certain extent, this method is quite workable for Venhuizen, as this artist's intent is not to design but to make. His approach toward incorporating "available" color in the creation of these objects seems completely arbitrary: He uses found shapes as well as paint color, creating visually playful works that can be interpreted in many different ways.

Venhuizen could take a lesson from the color employed by painter Selena Beaudry in her pleasing quintet of oils on canvas. Viewed from a distance, the light, airy sky colors of these paintings read as celestial puffs, yet up close, they reveal transmuted layers of heavy cloud.

Though using a very different palette, Ms. Beaudry's "Islets" has an approach somewhat in the mode of Maja Godlewska. (To see the work of these two women painters together with work by painter Michael Simpson would be something of a joy.) In a space this big, Beaudry's "feminine" colors soar and even take on some of the weight of Baroque ceilings, as if these were brought down from the sky and turned to vertical.

Kit Kube's two-room installation has many of the advantages of a solo exhibition, and indeed, the sculptor and installation artist's portion of SOUP is a light show all its own. At the entrance of a special room for Kube's spinning, laser-enhanced flask and other lighting elements stands a robotic sculpture that seems to beckon. The view inside Kube's box-like room is well worth the visit, as gleaming lights project in moving and forceful images.

The next installation of SOUP, which will open in September/October 2006, is in the planning stages. Based on the standard of the work in this show, it will be an event worth waiting for.

The exhibit SOUP will run through April at Hart Witzen Gallery, 136 E. 36th St. Showings by appointment only. See elements of the show online at www.hartwitzengallery.com. For more info, call 704-334-1177.