Spend less on a budget-friendly "pre-honeymoon."

Then take the big wedding trip when you can really afford to blow it out. 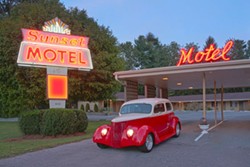 You're probably not having your mother's wedding. So why have your mother's honeymoon? (Sorry for putting the image of your parents doing "it" into your head. I'm sure they, like my folks, had sex only to procreate.)

Many couples these days are footing the bill for all or part of their weddings. And funding The Big, Fat Honeymoon right after the wedding can be a real budget-buster. Why not take a quick trip to decompress after the wedding? Save your pennies for a bigger wedding trip a year or so down the road.

You probably know about Charleston's genteel charm and Asheville's hippie cool. (And about Myrtle Beach, if you like traffic, crowds and chain restaurants.) Here are a few of our favorite off-the-beaten path getaways you might consider:

OK, so The Sunset Motel (www.thesunsetmotel.com) might actually be your mother's honeymoon motel. Originally built in 1958, it was restored in 2011 to its former mid-century glory. The retro chic motor lodge is authentically 1950s and so square it's hip. (Or is it the other way around?) The rooms — some with kitchens — and a 900-square-foot cottage are "unique and constantly evolving as I find kitschy furniture and décor," says owner Lori Roberts. "For honeymooners, we offer a package that includes champagne, handmade chocolate-covered berries and petals strewn throughout."

Nearby are the Pisgah National Forest, DuPont State Forest and Gorges State Park. More than 250 waterfalls are sprinkled throughout the county. When you tire of hiking and mountain biking, explore Brevard's charming and surprisingly vibrant downtown that looks so much like Andy Griffith's Mayberry there's even a soup-and-sandwich restaurant (and a darn good one!) named after the fictional town. Don't miss Theophilus on South Broad Street for boho chic fashion and home goods.

It's easy to drop some cash in these side-by-side, upscale mountain towns just a little more than three-and-a-half hours from Charlotte. (You could do that by staying at the refined Old Edwards Inn & Spa, or the rustically elegant Inn at Half Mile Farm.) But you could just as easily stay at the quaint Chandler Inn (www.thechandlerinn.com), which advertises itself as having "overnight accommodations for nice people" and will run you $122 to $240 a night, including a gourmet breakfast. Shopping in Highlands and Cashiers is sport enough, but outdoorsy types make a weekend of the dozens of day hikes, many including waterfalls, in the area. Bridal Veil Falls is perfectly named for a honeymoon hike. Fine dining abounds at stalwarts like On the Verandah and The Gamekeeper and the upstart Ruka's Table.

"Yes, that Greenville" is the city's slogan after its rebirth as a cool place to live and visit. The vibrant, pedestrian-friendly downtown (which Forbes called one of the nation's 10 best) has a river running through it (and the industrial-cool Liberty Bridge spanning it) and restaurants, boutiques and bars that take full advantage of the picturesque views. Bike trails wind their way from urban to suburban to rural areas. This is a city for cyclists, but it also celebrates art and music. Public art is everywhere. And the Peace Center for the Performing Arts (www.peacecenter.org) brings great music and theater to town. Music lovers should check out The Handlebar: A Listening Room, Pub &Café (www.handlebar-online.com).

Cyclists — and those who rarely leave the couch — find something to love in the 33-mile Creeper Trail that runs through Abingdon and Damascus, Va. The Virginia towns in the Blue Ridge Mountains are about a three-hour drive from Charlotte. The scenic, shaded trail isn't just for those on two wheels; hikers and horses are equally welcome here. Much of the former railroad is on an ever-so-slight decline; lazy cyclists can coast the entire way! Most visitors stay at Abingdon's historic Martha Washington Inn (www.marthawashingtoninn.com), but there are several area campgrounds, too. Don't miss the Barter Theatre (www.bartertheatre.com), which opened during the Depression and allowed patrons to pay for their entertainment with produce. Famous alumni include Gregory Peck, Wayne Knight ("Newman" from Seinfeld) and Ernest Borgnine. It's not all Carousel and Kiss Me, Kate here, either. Daring theater, like the world premiere of a play about Andrea Yates, the mother who drowned her five children in the bathtub, is part of Barter's mission.

No, really. The restored Opera House (www.newberryoperahouse.com) is the main reason to drive two hours south of Charlotte for a night or two. The Opera House will even host your wedding. Couples have been married in the historic lobby, on stage and in the perfectly manicured Memorial Park. Built in 1881 and the toast of the Midlands area back in the day, the building fell on hard times. But the townspeople restored it with a $6 million renovation. With a capacity of just over 400, the intimate theater gives you a chance to see the likes of Willie Nelson, The Steep Canyon Rangers and Eddie Money closer than you're likely to get elsewhere. And you may even catch a star from your parents' day. Frankie Avalon, Loretta Lynn and The Kingston Trio have all played here. Right next door to the Opera House is the hotel built specifically to host out-of-towners here for a performance. It's a Hampton Inn, so it's not wildly romantic. But it's new, clean and easy on the wallet. (Think of the money you're saving!) Spend time antiquing downtown or hike, bike and ride the horse trails at nearby Lynch's Woods.