Steve Umberger of 'Angels in America' Fame Returns With 'The Christians' 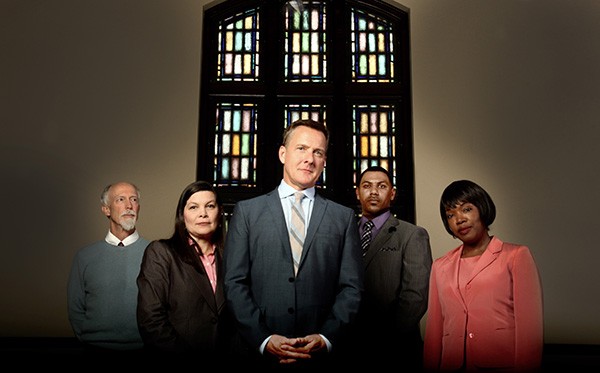 'The Christians' (Photo by Donna Bise)

There's plenty of history between Steve Umberger and the Queen City, stretching back to 1976 when he founded the Actor's Contemporary Ensemble. That company became Charlotte Repertory Theatre, which gave us an epic production of Angels in America, Parts 1 and 2, in 1996. On the wings of Umberger's supreme achievement as Rep's artistic director came a firestorm of local homophobia and negative national publicity that strafed the cultural landscape of this city like nothing before or since.

Reverberations from that controversy kept rumbling for years afterward, resulting in the eventual ouster of Umberger in 2002, and the self-immolation of the company he founded by a rogue board of directors in 2005. In an acrimonious parting shot in the announcement closing Rep down, board chairman William Parmelee charged that Charlotte had little interest in supporting professional theater.

Now, Umberger is back in Charlotte from Winston-Salem, but he isn't here to stir up any new controversies or settle old scores. He is here to remind us that differences of opinion don't need to be acrimonious — and maybe, just maybe, to prove that Parmelee was dead wrong.

Picking a drama that can achieve those aims wasn't simple, but Umberger and his PlayWorks Group chose Lucas Hnath's The Christians, a work that premiered in 2014 at the prestigious Humana Festival in Louisville and went on to win acclaim in Chicago, Houston, San Francisco, and off-Broadway. Hnath made a bigger New York splash earlier this year on Broadway when A Doll's House, Part 2, his sequel to Henrik Ibsen's famed feminist drama, picked up eight Tony Award nominations.

Umberger honed in on Hnath before the playwright's Broadway triumph — at exactly the right moment.

"I first read it right after the election," Umberger recalls, "when everyone was starting to find everyone else's viewpoint contemptible. I wondered if there was a play out there that would truly represent everyone fairly and let them tell their side of it in a way that would be heard. Then I found The Christians."

Set in a megachurch, The Christians fits Charlotte like a glove. After building up his church from a storefront acorn to a mighty oak, Pastor Paul delivers a progressive sermon that proposes to take his church and all who belong to it on a spiritual hairpin turn. Because in a recent conversation with God, God told Paul that there is no hell.

Quite a bombshell for the associate pastor whom Paul has mentored, for church elders who have backed and supported Paul for 20 years, and for his wife Elizabeth, who was blindsided by her husband's bold new doctrine. So are many members of the congregation, which now numbers in the thousands. They have believed strongly in Pastor Paul, but everyone isn't ready to be redirected like sheep into strange new beliefs.

It's as if a Republican were elected President and told his party that they were mean.

Only there's a bond between these people as they wrestle with their faith amid the fallout from Paul's sermon. Spiritually, how far is Associate Pastor Joshua willing to bend and still serve his mentor's church in good conscience? Administratively, how can Elder Jay keep supporting his church's founder if there are massive defections from the flock? And personally, how can Elizabeth forgive Paul for not consulting her on a move that could have such a dramatic impact on his livelihood and their family?

Yes, there is mutual love and respect between all of these Christians. Yet the issues are substantial, and Paul, the visionary leader, may be the most selfish and inconsiderate in the group.

Umberger gets to reunite with some of the same suspects who worked with him decades ago on Angels: set designer Joe Gardner, lighting guru Eric Winkenwerder, and actor Graham Smith, who made Roy Cohen such a demonic firebrand. Two other Rep vets are in the cast, playing the lead couple. Chandler McIntyre last hooked up Umberger and Rep in Wit (2001), and Brian Robinson, playing Pastor Paul, is a two-time CL Actor of the Year who played key roles in three CL Shows of the Year: Malice Aforethought (1992) and Falsettos (1993) for Rep, and Take Me Out (2004) with Actor's Theatre. 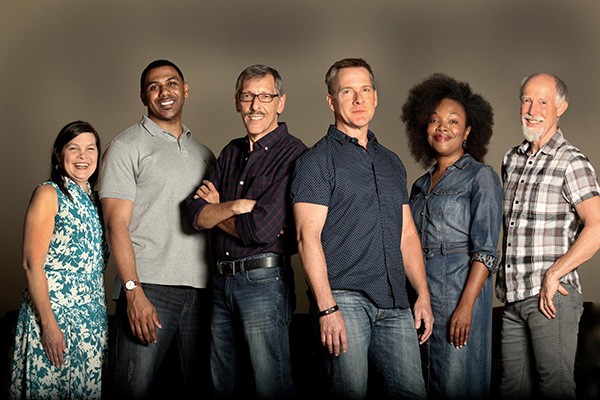 More recently — and more to the point — Robinson gave a fine account of Father Flynn in another religious cliffhanger, John Patrick Shanley's Doubt, playing opposite Umberger's wife, actress Rebecca Koon. That North Carolina Stage Company actually toured Charlotte with that production in 2008 after Robinson had moved to Atlanta.

"When I lived and worked as an actor here from 1988 until 2008, the city was teeming with homegrown theatre. It's certainly not all gone, but it is certainly greatly diminished," says Robinson. "Rebecca and I had done Doubt together, and our friendship became quite close. In August 2016, I was exploring the idea of creating some theatre. Steve was the one of the first people I thought of when considering with whom I would want to partner. I asked Rebecca what he was up to. Her response was, 'I think he's in a similar place. You should call him.' And now here we are, one year later, about to unveil the fruits of this first collaboration."

Burnt by the lackluster support from the CharMeck Arts & Science Council after the Angels flap, Umberger is relying on a more conservative, self-sufficient financial model with PlayWorks Group.

"Even though [The Christians] is a single production, it's set up so that it could actually pay for itself, if enough people come," Umberger explains. "That could also conceivably be expanded to multiple plays in some sort of season that looks like a company. It doesn't require massive corporate sponsorship or grant funding or big giving. It only takes enough people buying a ticket."

Umberger is also tapping into homegrown talent he hasn't worked with before in mounting his new venture. He saw Jonavan Adams in Ma Rainey's Black Bottom this past spring and has tapped him to play the schismatic Pastor Joshua. Strangely enough, Umberger had never met playwright/actress/director April C. Turner until Christians auditions, though her C.O.T.O.: Chocolate on the Outside drew a Loaf nomination for Best Drama back in 1997.

Turner turns up as Jenn, the truth-seeking congregant whose questions wreak havoc among Paul's flock. Just as convinced as Hnath must have been in 2014 that Hitler was synonymous with evil, Jenn asks if Der Fuhrer is earmarked for hell.

"Steve is a pro," says Turner of her first Umberger experience. "He is passionate about his work, and he owns his voice as a director. He's a gentle director, yet firm in his vision. We spend a lot of time asking and answering questions about 'what's really going on' and digging into the details of the needs of each character."

Adams, who came to understand who Umberger was only after he was cast as Joshua, also chimes in with a glowing review.

"It's surpassed my expectations in every way," says Adams of the rehearsal process. "This play calls for a uniquely gifted director to be able to explore its nuanced complexity."

But we still need to wonder whether Parmelee was right more than 12 years ago – whether Charlotte really is fertile ground for professional-grade homegrown theatre. Since Rep died in 2005, Charlotte hasn't had an Actor's Equity company that was part of LORT, the top-tier League of Regional Theatres.

It's sad, says Robinson: "The citizens of Charlotte deserve and need a thriving professional theater scene that is locally produced."

Will we turn out to help make it happen? This may be our last best chance.