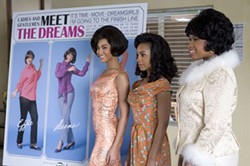 The frenzied family tale Night at the Museum (**) plays with fire by employing three overexposed actors -- Ben Stiller, Owen Wilson and Robin Williams (only Will Ferrell is missing) -- and potentially allowing them to run rampant through an overstuffed fantasy yarn. Mercifully, though, Stiller is muted, Williams is similarly restrained, and Wilson ... well, Wilson is still pretty annoying (two out of three ain't bad). Stiller plays Larry Daley, the new night watchman at a museum where the exhibits come to life after the venue closes for the day. The benevolent Teddy Roosevelt (Williams) is helpful to have around, but Larry has his hands full evading Attila the Hun, dealing with a mischievous monkey, and settling squabbles between a miniature cowboy (Wilson) and an equally diminutive Roman commander (Steve Coogan). A clever premise (adapted from a children's book) is hampered by lackluster scripting and directing, though Ricky Gervais provides some choice comic moments as the supercilious museum head. If nothing else, this should command the attention of kids who have grown tired of having their pictures taken with Santa. (Note: In addition to playing regular movie houses, Night at the Museum will also open in the IMAX Theater at Discovery Place.)

The draggy dragon yarn Eragon (*) bored me silly, but I imagine it might appeal to folks who have never before seen a fantasy flick. Specifically, it might fill the bill for kids who have somehow managed to miss all the Star Wars and Lord of the Rings films (are there any?). The movie is based on the popular book written by Christopher Paolini when he was a mere lad of 15. It was a huge success among most, though not all, teen readers (my 15-year-old daughter, herself weaned on fantasy, thought it was tripe), and if the movie is faithful to its source material, then the lawsuit-happy George Lucas corporation has grounds to sue for plagiarism. Let's see, a naive farmboy decides to take on an evil empire (more so after his uncle is murdered by soldiers seeking the boy) with the help of a wisdom-spouting mentor and a devil-may-care maverick. What's more, he also has to rescue a beautiful princess from the clutches of an evil ruler and his supernaturally endowed enforcer. The key difference is that instead of a lightsaber, the lad comes equipped with his very own dragon -- and there's no Death Star in sight, just a deadly star in the form of lead Ed Speleers. As Eragon Skywalker, newcomer Speleers is about as charismatic as a comatose possum, and even capable actors like Jeremy Irons (as Brom Kenobi), Djimon Hounsou (as Ajihad Calrissian) and Robert Carlyle (as Darth Durza) are soundly defeated by the dreadful dialogue and indifferent pacing.