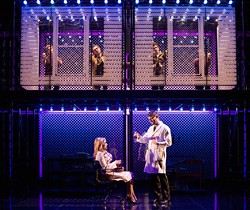 Outdoor entertainment has long been a Charlotte staple during those magic days between the end of the school year and the torrid season that traditionally smacks us on the Fourth of July. A few new wrinkles are on tap in 2011 for arts lovers who like their symphony and theater by the light of the silvery moon.

Charlotte Symphony's 2011 Summer Pops schedule in SouthPark has the usual four-week run-up to its inevitable climax, the Celebrate America concert conducted by the ebullient Albert-George Schram at Symphony Park on Sunday, July 3. Members of the Oratorio Singers, Carolina Voices, and the Myers Park Presbyterian Church Choir will augment the holiday fireworks.

For the first time, Symphony will be charging admission to their Summer Pops series, $10 a pop to be exact. That's for adults — children 18 and under are still free. If you prefer to ration your intake of Schramm's corny patter, you might prefer to plunk your $10 down on his June 26 program, Big Band Bash, an idiom where he and Symphony truly excel. On the other hand, adults may wish to consider a Summer Pops/Symphony Park pass to all five concerts for $25.

The first in the series will be conducted by Christopher Warren-Green, who has ingratiated himself to the community during his first season in the music director slot as truly a people's maestro. Nor did Warren-Green's recent gig at Westminster Abbey, performing at the Royal Wedding, do anything to diminish his luster. His first outdoor concert — the first in a long while for a symphony maestro — will be A Strauss Serenade on June 12, showcasing the lighter repertoire of the Strauss family.

Uptown, the Charlotte Shakespeare Festival is blazing a new trail after five years at The Green — presenting their first non-Shakespearean production outdoors, Tartuffe, beginning on June 2 and continuing, Wednesdays through Sundays, through June 19. Presented by Collaborative Arts Theatre and directed by Festival co-founder Elise Wilkinson, Molière's wicked satire targeting religious hypocrisy will sport a new American verse translation by Ranjit Bolt and feature a bevy of fine Green veterans, including Chad Calvert, Joe Copley and Meghan Lowther. Admission will be free, but a $5 donation will be urged at the end of each performance. I almost said each picnic, since that's the prevailing ambiance.

The Festival heads indoors — and grows more Shakespearean — later in the season as Wilkinson, Copley & Co. tackle their mightiest undertaking to date, King Lear, at McGlohon Theatre in Spirit Square (Aug. 2). Nobody has attempted Lear in Charlotte since 1990, when Jack Beasley played the title role at UNC Charlotte.

Look around town during the summer, and you'll find plenty more mightiness under cool air-conditioned conditions. Hard-core theater fans are no doubt counting down the days to July 12, when Tony Award winner Alice Ripley recreates her role in the Broadway musical that won the 2010 Pulitzer Prize for Drama, Next to Normal. Ripley's role as Diana is a neurotic one — at the heart of a family struggling with old hurts and new challenges. We'll be seeing it at Knight Theater, so the feel of the touring version should be tantalizingly close to the high-strung darkness I saw at the Booth Theater two summers ago.

Of course, it's summertime, season of fluff, so we don't expect everything to be serious and edgy, do we? Count on the return of Cats (May 24) and Mamma Mia! (July 26) to satisfy the cotton-candy cravings of the masses, along with the first go-round at Belk Theater for Shrek the Musical (June 14). But there are other edgy offerings among the touring productions, including the unique rock and roleplay of siblings Astrid and Otto Rot in Die Roten Punkte at Duke Energy Theatre (July 14) and Cirque du Soleil's Alegria at the Time Warner Arena (Aug. 3).

Local companies offer a mix of the daring and the bankable. At the community level, Theatre Charlotte treads softly into the 2011 summer season with Same Time Next Year (June 17), a comedy that, by some strange coincidence, faintly resembles their 2010 hit, The Dixie Swim Club. Davidson Community Playhouse has improved their game in recent summers, so the comedy at their small Armour Street Theatre, Moon Over Buffalo (July 21), should shine nearly as brightly as their more ambitious musical venture at Davidson College, Ragtime (June 16), in the spacious Duke Family Performance Hall.

CPCC runs a community-style company during the school year, but come summer, the folks onstage get paid. With Deborah Rhodes slated to star opposite Charles LaBorde in Hello, Dolly! (June 3), CPCC Summer Theatre's 38th season gets off to a Mermanesque start, with the cross-dressing delights of Hairspray (July 15) closing out the cluster of five shows on campus over the space of eight weeks.

Settling into their new NoDa home at 2424 N. Davidson St., Carolina Actors Studio Theatre will conclude their 2010-11 season with Neon Psalms (June 16), a black comedy that reaffirms the wide gulf between a California trailer home and true Paradise — or the Ponderosa. Then CAST opens their 2011-12 season with a true coming-out for their new home, staging the Charlotte premiere of the most prestigious American play of the new millennium, August: Osage County. You needn't ask what month Tracy Letts's sprawling drama opens, but do mark down the date: Aug. 25.