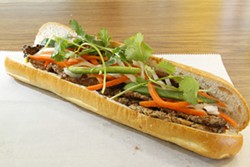 If you can get past — literally — the potholed crevices in the expansive parking lot of Asian Corners Mall, your reward will be a flavorful banh mi sandwich from Le's Banh Mi.

The space, though, has much to overcome. Built in the late 1960s, the mall fell into disrepair after Hurricane Hugo swept through Charlotte in 1989. Thirteen years later, the real estate was purchased by Vietnamese investors, who converted the space into Asian Corners by adding some exterior and interior design features. From the exterior, a few restaurants and multi-ethnic stores can be accessed. The interior spaces are primarily empty, with just a few bright spots — Le's, Dragon Court Chinese Restaurant and Hong Kong BBQ. An interior fountain lies dormant; the floors need cleaning; and the parking lot continues to deteriorate.

Take the hallway beside the International Supermarket and you'll find Le's Banh Mi, a small takeout sandwich shop owned by Minh Nguyen and his wife Le Thi Le. Nguyen, who relocated to Charlotte during the fall of Saigon in 1975, opened the shop seven years ago.

On the roster are a dozen banh mi sandwiches. Nguyen has French baguettes baked to his specifications: soft on the inside with a thin crunchy crust. These baguettes are also available for sale individually ($.60 each). These loaves are smeared with a house-made yellow mayonnaise, and then layered with a choice of grilled, house-cured, steamed or barbecue pork; cold cuts; grilled chicken; pork roll; or sardines. Then pickled daikon radishes and carrots — not too sour and not too sweet — tiny slices of jalapeno with seeds, and sprigs of cilantro are added before the sandwich is wrapped in white butcher paper and secured with a rubber band. Sandwiches range between $3 and $3.50. Sundays are busy. Some have proclaimed the banh mi the best sandwich on the planet; Le's offers a well-crafted rendition.

Sundays are even busier just down the street at Lupita's Tortilleria y Carniceria, co-owned by Adan Jaramillo and his uncle Modesto. Modesto, who has been in the tortilla and meat industry since the age of 14, convinced Adan, who grew up in Charlotte and owns a construction business, to open the store. Lupita's is such a success, they plan to open their second location — twice as big — on South Boulevard this May.

Once inside, you'll notice signs are in Spanish, but some employees are fluently bilingual. At the far end of the meat display case is the order counter. Two lines form: one for the freshly baked corn tortillas, the other for meats. Beyond the counter is the glassed-in baking center where you can watch masa de maíz (corn dough) being loaded into the tortilla machines imported from Mexico City.

Both tortillas and meats are purchased by the pound. A pound of tortillas equals 14 to 15 discs and a half pound of meat will fill these. This is enough to feed two.

Lupita's has five or six butchers on-site, and the prepared meats include barbecued beef (weekends), roasted chicken in adobo sauce, and roasted pork — with or without the skin. Near the front cashier are condiments: chipotle, pico de gallo, tomatillo, picante, quartered limes, and whole avocados. Hot tortillas are $1 per pound. One pound of pork is $6.50, marinated chicken (thighs) is $4, and the beef barbecue is $7.50. On weekends, the line can be 20 deep, but moves quickly.