Tanisha Williams: A West Side Story

How could Charlotte let an 18-year-old hang herself in the back of a police cruiser? 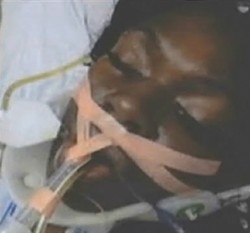 "No visisitors allowed," reads a sheet of paper attached to the door of the hospital room, high up in the intensive care unit of Carolinas Medical Center. "Don't mind the misspelling," a nurse says, jokingly, as she points out the error. "We just hadn't gotten around to fixing it."

What's the rush? It's just an oversight. But this particular oversight is a sadly fitting metaphor for the young life behind the door, barely hanging on. Her name is Tanisha Williams. She's been brain-dead in a coma since she choked herself with a seatbelt in the back of a police cruiser nearly two months ago. The case grabbed international attention and raised questions about Charlotte-Mecklenburg Police Department procedures. How could this happen? Who's at fault? What left this 18-year-old girl feeling so desperate she'd wrap a seatbelt around her neck and pull it until she lost consciousness?

Inside her room, the teenager's eyes are unexpectedly open, her body resting on the bed with slight movement of some of her fingers. Yet she is totally unresponsive, her mind gone, perhaps permanently. Her eyes may be open, but they stare right through you.

Williams soon will be released from the hospital and into the care of Talley, who doesn't know what she's going to do with her young granddaughter. "I don't have a nursing home for her to go to," Talley says. "I am going to have to take care of her myself."

It won't be the first time. The young girl's parents were never part of her life, Talley says. "When she was born, I adopted her, and started taking care of her from the first day she came home from the hospital. Her mother was the type that wasn't ready for kids, and Tanisha was always sad about not being with her mother."

Raised by Talley in the Dillehay Courts neighborhood of Charlotte, Williams had been a lively teen who loved clothes and fashion and enjoyed partying with her many friends. "She was independent," Talley says. "She wanted her own apartment and her own job and her own car. She was trying to get into a position to take care of herself."

Williams' independence caused some poor choices and she would eventually drop out of school, says Talley. Though the teenager had been arrested four times in the last two years, including once on larceny charges, all of the cases were dismissed, and Williams was trying to get back into school.

"There were times that she got in trouble," says Talley. "She was a good person, but she wasn't always happy."

Then came Dec. 5, 2011. "I was asleep," says Talley. "Tanisha came home and took the car keys while I was sleeping," which her grandmother says was not an unusual thing for her to do.

Williams' excursion led her to the urban fashion chain Citi Trends, in a strip-mall shopping center on Freedom Drive in West Charlotte. From there, reports of what happened get fuzzy.

What we do know is this: Just before 7 p.m., someone from Citi Trends reported to law enforcement that Williams had stolen a $14 shirt. The call went to an off-duty Charlotte-Mecklenburg police officer working security at the shopping center, according to CMPD Maj. Andy Leonard.

Accounts of what happened next vary. William Harding, the attorney representing the Williams family, has witnesses who say that the teenager was wearing the shirt she is accused of stealing when she entered Citi Trends; that she never used the store's dressing room, and that they even saw her stand in line to purchase items while there.

Leonard doesn't dispute much of this. "She had purchased some items at the store and was wearing the shirt at the time of arrest," says Leonard, who maintains that a not-yet-released video taken from inside Citi Trends will verify the charge of shoplifting.

Still, Harding questions the charge. "Why would someone, on one hand, steal a shirt, and then buy items from that very store which would require you to stand in line and risk getting caught?" he asks. "This whole thing doesn't make sense."

Whatever actually happened in the store, this much is true: Police arrested Williams at the scene on charges of misdemeanor larceny. Normally, given the relative insignificance of the item stolen, police would have written a citation, but Williams was demonstrably angry and refused to provide her name to the three officers at the scene, according to police.

"If you can positively identify the person, then that allows you the option of writing someone a ticket," says Leonard. "But if you can't identify them, then writing that ticket has no guarantee that you are writing it to the correct person."