That's My Boy: Disown it | Reviews | Creative Loafing Charlotte
Switch to the mobile version of this page.

That's My Boy: Disown it 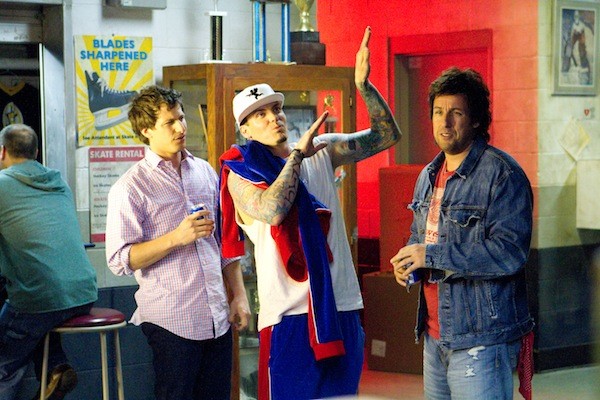 In the name of full disclosure, I missed the first 15 minutes of the 115-minute That's My Boy.

With so many advance screenings presently being held at Regal Stonecrest, a tardy arrival was bound to happen one day, given that getting from downtown to Ballantyne on time while navigating the clusterfuck that is I-485 traffic is a feat that would tax even Indiana Jones. But hey, better late for this than, say, The Avengers.

I bring this up because I've heard from at least two sources that the first 15 minutes are the best part of That's My Boy. In other words, had I witnessed this merriment firsthand, I might have willfully ignored the pathetic 100 minutes that followed and handed this a perfect 4-star rating. But that would have required a lot of willful ignorance on my part.

At least the theatrical trailer had already thoroughly prepared me for the central thrust of the picture (I mean, we're not talking Chinatown complexity here). While a teenager, Donny is seduced by a lusty teacher and ends up impregnating her. The 13-year-old lad is left to raise the child, named Han Solo (ho ho), as a single parent; once the kid becomes an adult (played by Andy Samberg), he understandably changes his name to Todd and severs all ties with his dad. But on the eve of his wedding to the lovely Jamie (Leighton Meester), Todd is aghast when Donny (Adam Sandler) suddenly reenters his life, hoping to make amends but instead leading his son into all manner of trouble.

That's My Boy is pretty unbearable, but it's impossible to completely bomb a comedy that sparkles like Chaplin's City Lights when compared to Sandler's cinematic outhouses Jack and Jill and Grown Ups. Regular co-stars Rob Schneider and David Spade are thankfully missing, although screen irritant Nick Swardson is still on hand, here playing a striptease patron who tells an obese dancer to "use my face as your toilet!" Vanilla Ice also figures into the proceedings — not just in one of the obligatory cameos (those are reserved for the likes of TV star Alan Thicke, former ESPN host Dan Patrick and a certain Oscar-winning actress who should know better) but in a co-starring role as Donny's best friend, Vanilla Ice. That's right: The lame rapper is playing a fictionalized version of himself, but it doesn't exactly set off Being John Malkovich vibes.

On reflection, I suddenly don't mind so much about those missing 15 minutes. I would rather have the other 100 back.

That's My Boy is not showing in any theaters in the area.