The Impossible: Soggy second half mars tense drama | Reviews | Creative Loafing Charlotte
Switch to the mobile version of this page. 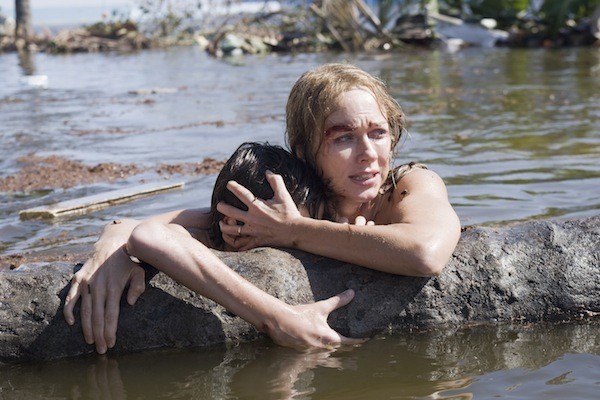 One of the deadliest natural disasters in history, the 2004 Indian Ocean tsunami obliterated several countries' coastlines and resulted in more than 230,000 deaths. It touched people all over the globe, those who were moved enough to contribute financially (global donations reportedly totaled $14 billion) and those who were affected on a more personal level (Tom Schwerk, one of my best friends from high school, perished while vacationing in Thailand, although his wife and two small sons thankfully survived).

There are countless tales to relate from this tragedy, and rather than focus on several in the schlocky manner of a '70s disaster flick, director Juan Antonio Bayona elected to center on the ostensibly true-life story of Maria and Henry Belon, a Spanish couple on holiday with their three boys in Thailand when the tsunami hits. Many have already criticized The Impossible for largely ignoring the plight of the locals while focusing on a privileged European family, while others have lambasted it for further Anglicizing the project by casting Naomi Watts and Ewan McGregor instead of Spanish actors as the parents.

Sidestepping these issues, it's clear that the problem with The Impossible is that the second half collapses after a powerhouse opening hour. The sequences involving the tsunami are incredible, and genuine tension is maintained as Maria and oldest son Lucas (an excellent Tom Holland), separated from the rest of their brood, desperately try to stay alive amidst all the carnage. Watts is superb as Maria (she recently received the film's sole Oscar nomination), and it's a shame her ailing character is largely confined to the sidelines during the less impressive second half, a stretch that culminates with a series of coincidences so laughable, they belong in a vintage screwball comedy instead. The Impossible has enough going for it to earn a mild recommendation, but it's unfortunate that it ends up self-destructing as rapidly as one of those Mission: Impossible messages.

The Impossible is not showing in any theaters in the area.