Gone are Dusty Rhodes, the son of a plumber from Austin, TX, and the Andersons, Gene and Ole, whose Anderson block would leave an exhausted opponent marooned in the ring to flounder and drop like an animal shot with a tranquilizer gun; gone are the tough guys, Chief Wahoo McDaniel, who sewed his own stitches -- more than 2,000 in his career -- and Johnny Valentine, who hit guys so hard that even the old-timers, who never griped about anything, would complain. Gone are the Rock & Roll Express, The Masked Superstar, Mr. Wrestling I and II, The Professor, The Butcher, and Ricky Steamboat, the only wrestler who never turned bad and couldn't, even if they gave him a chain saw.

Gone is the Iron Sheik, who brought a mat to pray to Allah before every match -- to the boos of red-blooded Americans; gone is the Russian Nightmare, Nikita Koloff, whose cold, angry stare could frighten a marine even after the Cold War; gone are the flying elbows, airplane spins, Superfly Splashes, brainbusters, Indian grapevines, Russian leg sweeps and cobra holds; the midgets and giants, cowboys and Indians, the Nazi sympathizers and Abe Jacobs the Jew.

Some are dead, some have fled Charlotte and some have settled into anonymity. All but one, the most passionate wrestler who ever lived -- George South. If only this were a battle royal.

George has always had faith -- blind faith -- faith that won't submit to a sleeper hold. His gospel is tattooed on his forehead and printed across his chest. Between his faded blue eyes and his shoulder-length gray hair (which he wore in a mullet in the golden 1980s), George's forehead looks as if someone has played tic-tac-toe on it with a knife.

In extreme matches, wrestlers conceal razors in their wrist tape and, during the bout, slice themselves along their foreheads. Their blood-coated faces help sell the violence of the sport. Bulldog, one of George's current students at his training school, says there was a time when George cut himself every night.

George wears his other testament on T-shirts that he's diced into midriff-sized, sleeveless rags. "I Love Jesus," "Jesus, That's My Final Answer," and other religious messages hang over his undershirt like a sandwich board or a bib. George began cutting his T-shirts because he stained them all eating in his car on the road. Then he started to like the style. He wears them everywhere -- to practice, around town, to shows.

Question either of his two loves -- rasslin' or religion -- and you'll set George off. He's easily excitable. When he's driving home a point, he'll clap his hands three times or squeeze your shoulder. There's one sure-fire way to get him worked up, but don't you dare try it. Don't you dare to say that four-letter f-word: F-A-K-E.

If you didn't follow wrestling, you wouldn't understand. You'd see them throw punches intended to miss, you'd see choke holds that don't really choke. You might call it phony, but you'd be missing the point.

"Why would anyone want to know if it's fake? You're not going to be better off," says George. "I still believe in Santa Claus and the Easter Bunny. To this day I don't want to know how a magician pulls a rabbit out of his hat."

In the old days in Charlotte we did not take ourselves so seriously. Our heroes had platinum blond hair and twenty-seven-inch biceps, but you knew who was good and who was evil, who was changing over to the other side, and who was changing back. You knew that sooner or later the referee would look away just long enough for Bob Noxious to hit Lord Poetry with a folding chair. You knew that Lord Poetry would stare up from the canvas in stricken wonder, as if he had never once in his life seen a folding chair. (In the bar, we screamed at the television, Turn around, ref, turn around! Look out, Lord Poetry, Look out!) 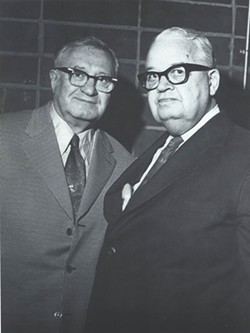 The old days started in 1934 when a soft-spoken man came down from the Virginia mountains to Trade and Tryon streets with a vision and $5,000 in his pocket. Big Jim Crockett, as he came to be known, wasn't nicknamed in the ironic sense. He was big. He kept a towel on the dashboard of his car and would put it between his gut and the steering wheel to keep the two from touching when he drove.