The Spies Who Came In From the Art Sale

CL obtains report detailing alleged Israeli spying in the US 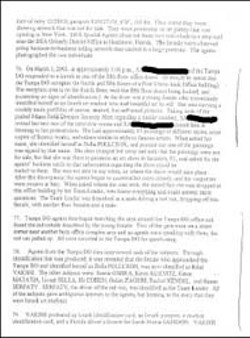 A major international espionage saga is unfolding across the United States, with some of its roots here in the Southeast, specifically Atlanta. It's been pretty hush-hush so far, largely because the implications could be a major embarrassment for the government.

The spy story is even more touchy because it isn't Saddam, Fidel, Osama or even what passes nowadays for the KGB that's spying on America -- it's our "friend" in the war against "evil," Israel.

The basis of the spy allegations is a 60-page document -- a compilation of field reports by Drug Enforcement Administration agents and other US law enforcement officials.

Creative Loafing obtained a copy of the report from intelligence sources with long-term contacts among both Israeli and American agencies. The government has attempted to deflect attention from earlier leaks about the spy scandal. However, while declining to confirm or deny the authenticity of the document, a spokesman for the DEA, William Glaspy, did acknowledge that the agency had received many reports of the nature described in the 60 pages.

A source familiar with the creation of the document has told CL that the 60-page memo was a draft intended as the base for a 250-page report. The larger report has not been produced because of the volatile nature of suggesting that Israel spies on America's deepest secrets.

Another DEA spokesperson, Rogene Waite, told Associated Press a draft document had been compiled and forwarded to other agencies.

The nation's most prominent Jewish newspaper, the New York-based Forward, also has confirmed portions of the vast spying network -- although stating that the Israelis were monitoring Arabs in the United States, not trying to access US secrets. Referring to the arrest of five Israeli employees of a New Jersey moving company who were arrested and held for two months after the September 11 attack, Forward on March 15 stated: "According to one former high-ranking American intelligence official, who asked not to be named, the FBI came to the conclusion at the end of its investigation that the five Israelis ... were conducting a Mossad surveillance mission and that their employer, Urban Moving Systems of Weehawken, NJ, served as a front." Forward also reported that a counterintelligence probe concluded two of the men were operatives of Mossad, Israel's spy service.

Reports of the spying were first made public in December broadcasts by Fox News reporter Carl Cameron. It isn't clear whether he had the 60-page document or was only told its contents. A French online news service has obtained the report, and Le Monde in Paris has advanced the story. However, in the United States, the media generally ignored the original Fox broadcast. The Charlotte Observer, for example, hasn't reported the story.

The absence of reporting hasn't gone unnoticed. The authoritative British intelligence and military analysis service, Jane's Information Group, on March 13 chided: "It is rather strange that the US media ... seem to be ignoring what may well prove to be the most explosive story since the 11 September attack, the alleged breakup of a major Israeli espionage operation in the United States which aimed to infiltrate both the Justice and Defense departments and which may also have been tracking al-Qaida terrorists before the aircraft hijackings took place."

The document relates scores of encounters between federal agents and Israelis describing themselves as art students. The implication is that the seemingly innocuous cover was used to gain access to sensitive US offices and military installations.

CL has contacted some of the named agents, and three federal employees have confirmed the incidents described in the report. None disputed the authenticity of the report. One senior DEA official, when read paragraphs that mentioned him, said: "Absolutely, that's my report," adding, however, that he didn't think the incidents were sufficient to prove an ongoing spy operation.

"The activities of these Israeli art students raised the suspicion of (the DEA's Office of Security Programs) and other field offices when attempts were made to circumvent the access control systems at DEA offices, and when these individuals began to solicit their paintings at the homes of DEA employees," the document states. "The nature of the individuals' conduct, combined with intelligence information and historical information regarding past incidents (involving Israelis leads the DEA) to believe the incidents may well be an organized intelligence gathering activity."

Much of the Israeli activity, according to the report, centered on Florida. In addition to attempting to gain access to government installations, the document states that the Israelis approached many intelligence agents, prosecutors and federal marshals at their homes.