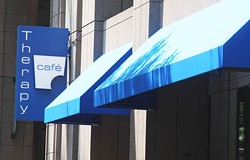 After a few weeks of dealing with allegations of racism, Therapy Café has closed.

Former general manger Adam Rees said under the pressure of the claim and a fall-off in business, Therapy had to shut its doors.

"Because our business was going so slow, they just [weren't] able to maintain the daily expenses. Business ... dropped off so significantly — and in my eyes it's a direct reflection of the e-mail that was sent out," said Rees. "You know, [Brown] made the statement that 'Therapy is racist, don't patronize them,' and over half of the staff was African-American. So, now everyone is out of a job. What's better — having people not come to Therapy because of whatever this guy had said or to have to close Therapy down and none of us have jobs?"

CL attempted to contact Therapy co-owner Jason Stone, but as of press time, we had not received a response.

According to Rees, things weren't great before Therapy started doing business with Six Figure Entertainment. The café's daily numbers had dropped 30 to 40 percent, he said, before entering into the contract with the promoters. After the e-mail circulated, Rees claims the mostly African-American crowd that hung out at Therapy on Fridays and Saturdays just didn't show up.

"I had one large party of 50 people cancel because of the e-mail," he said. "Fifty people. That's a lot. That's a couple of thousand dollars right there."

Rees said he tried to meet the allegations head on, posting a message on the company's website addressing the e-mail and denying that Therapy was racist; the post also implored people to come in and check out the restaurant for themselves. At the same time, the e-mail from Six Figure Entertainment had gone viral and sparked conversation on social media sites like Facebook.

Then, the Charlotte-based news site QCityMetro.com reported on Aug. 10 that another promoter was having problems with Therapy and had filed a small claims lawsuit against the café because of a party that went awry during the 2010 CIAA basketball tournament.

According to the website, promoter Christopher Dennis alleges that the owners of Therapy violated the terms of a deal he had with them during the tournament in February. He has asked the court to award him $3,800.

"He's claiming that we wouldn't allow him to turn the music up, but that was clearly stated in the contract that during the week being where we are, we're right underneath Bank of America, you couldn't turn your music up until after 5 p.m.," Rees said. "He's claiming that he couldn't make his money because the music wasn't loud enough, and that's clearly not the case."