With so much growth and competition in Charlotte, restaurants and other businesses are relying more than ever on the power of marketing to elevate their brands. Enter marketing pro Elena Kacan, who is gaining respect in the city's culinary world even though she rarely picks up a knife.

Kacan represents the next generation of culinary professionals in Charlotte: the 24-year-old Concord native and Appalachian State University grad is the in-house director of communications for Fidelli Kitchen, a new eatery gaining attention in the heart of South End.

As communications director, Kacan's job is way more than just buying ads, planning events or sending out fliers. She is a key influencer in the Fidelli's dining experience and spends her time talking to patrons, researching the competition, tracking trends and tasting food — all to find new and creative ways to convey the vision of the owner while appealing to the senses of South End's ever-changing demographics.

A tough job? We caught up with her at her usual spot by the back bar to find out. 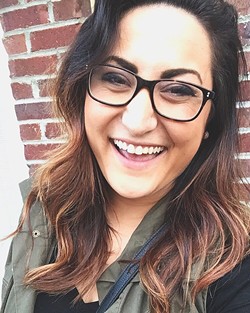 Creative Loafing: You look pretty young to have aready landed a top job at one of the hottest new restaurants. How did you do it?

Kacan: (Laughs) Well I graduated from App State back in 2014. I was studying to be a broadcaster but realized I had a knack for sales. After college I started selling media and although I worked for a really good company, I didn't really like what I was selling. It felt like work. During that time I'd moved Uptown and totally fell in love with living in the city. I decided I didn't want to sell media anymore but I was willing to do whatever it took to keep living Uptown.

I ended up taking a waitress job at another restaraunt, and even though the pay was less I really enjoyed the environment and the interactions with my guests. A chance meeting led to me being introduced to [Fidelli] owner Scott Richardson, who liked my energy and fresh perspective. He's a Harvard Business grad who ran several other successful businesses before opening Fidelli's. Because of that he was really open to take a chance and committed to bringing a fresh millenial perspective to this new business. I was just smart enough to follow up.

What are some of the innovations at Fidelli's that you may not find other places?

Since we are so new and in such a vivid and exciting area of the city we wanted a really cool architectural design and visual aesthetic. When you walk in it's a really clean and open space but it's also very warm and nurturing. People can come here in yoga pants or on date night and still feel just fine.

These were concepts the owner envisioned but I help bring to life. From our digital menu boards to a credit card-operated, self-serve wine bar, we're pretty cutting edge but we're not stuffy. Just imagine if Chipotle and Panera had an Italian baby with lots of wine. That's us.

Some may argue that marketing and culinary arts are in two totally different lanes. Your thoughts?

They can believe that if they want to, but this is 2017. Technology is booming and competion is everywhere. If you don't have a strong brand image and customers who are loyal, you will not survive. But those relationships are easily built through effective marketing, and this is true not only in culinary arts but in all business. Great marketing and real engagement bridges gaps, gets you real feedback and opens the door for growth.

I focus on that growth of our business everyday, from menu selection to wine pricing. I am a hands-on part of our daily operations, so it seems safe to say the lanes have merged. At Fidelli's we don't fight progress or change. We are committed to maximizing engagement with our customers because we know the strongest relationships are built through two-way communication, brand positioning and familiarity.

So yeah, I guess you can say myself and others like me are redefining the term "culinary pro."