Tim & Eric's Billion Dollar Movie: Not worth a cent | Reviews | Creative Loafing Charlotte
Switch to the mobile version of this page.

Tim & Eric's Billion Dollar Movie: Not worth a cent


The funniest thing in Tim & Eric's Billion Dollar Movie — excuse me, the only funny thing in Tim & Eric's Billion Dollar Movie (in case you missed the above box, it's worth repeating: * out of four) — is a sudden realization concerning Oscar nominee Robert Loggia (Jagged Edge), who appears in the film as a murderous studio head. When exactly did this respected character actor begin resembling Al Lewis during his stint as Grandpa on The Munsters? 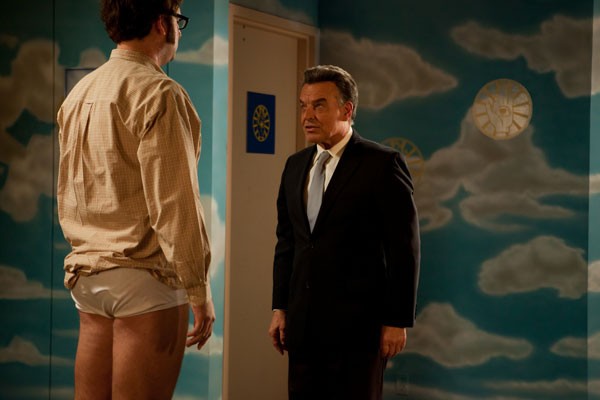 Aside from this modest chuckle — well, OK, there's also a Top Gun gag that might slightly raise the corners of the mouth, at least until it's eventually run into the ground — Tim & Eric's Billion Dollar Movie is about as funny as discovering that you have cancer, AIDS and a brain tumor all on the same day. A joint writing-directing-starring effort for Tim Heidecker and Eric Wareheim, the duo of Adult Swim and YouTube infamy, this film is witless and puerile — and so awful it makes me wonder if I'll be forced to be more charitable to the next Adam Sandler turkey that comes down the pike.

"But wait!" interjects the team's hardcore legion of fans. "Unlike Sandler, these guys are geniuses!" Look, let's not mince words here. Anyone who believes Heidecker and Wareheim to be comic gold will more than likely love this movie, and they should attend with my full blessing. Their popularity, particularly among young males, cannot be denied, and their efforts can be found being defended all over the Internet. (Sample quotes: "Their humor is not funny because it's stupid, it's funny because they know it's stupid"; "So bad it's bad, in a funny way"; "If you get it you get it, it's not that complicated"; "I think the film being a travesty is the point.") Yet for me personally, Tim and Eric are simply not funny. I daresay I could go down to the nearest Target and randomly drag two strangers out of the checkout line, and they would possess better comic chops than these guys. Other comedians, past and present, have been successful because of their deft physicality (Charles Chaplin, Cary Grant), pitch-perfect delivery (Richard Pryor, Walter Matthau), humanist wit (Jack Lemmon, Woody Allen), even carefully orchestrated vaudeville shtick (W.C. Fields, Bob Hope). The mode in vogue these days is anti-humor, which posits that the joke is that there's no joke aside from the expectation of a joke. Andy Kaufman was successful at this brand of comedy; Will Ferrell and John C. Reilly (who, incidentally, both appear in this film) are hit-and-miss; Zach Galifianakis and Will Forte (also both here) are mostly miss-and-miss; and Eric and Tim are bottom-feeders.

The plot centers around the efforts of Tim and Eric to earn a billion dollars running a dilapidated mall (one sample store sells used toilet paper taken from Porta-Johns) in order to recoup the money they lost making a movie, but let's focus on a couple of specific scenes. In one, Eric visits a health guru (Ray Wise) who instructs him to sit in a bathtub surrounded by several young boys. On cue, the lads crap continuously into the tub until Eric finds himself drowning in diarrhea. Is it gross? Of course. Is it funny? Well, 8-year-olds find toilet humor intrinsically funny, but many folks above that age group need some sort of satiric spin. In Mel Brooks' High Anxiety, there's a nasty scene where scores of birds fly above Mel's head, bombarding him with poop; it's a hilarious bit because it's a perfectly executed spoof of Hitchcock's The Birds. What, exactly, is the bathtub scene in T&EBDM spoofing? (Maybe health gurus? Zzzz ...) Or is it merely supposed to be a shocking scene, made to make us feel uncomfortable (as the duo's supporters insist is part of their genius)? Please. Ever since Luis Buñuel showed that eyeball getting sliced open in 1929's Un Chien Andalou — and through Divine eating actual dog doo in John Waters' 1972 Pink Flamingos — moviegoers have been subjected to any number of shocking and uncomfortable scenes. The entirety of this new film is on the level of seeing a 5-year-old boy picking his nose — unsightly, but hardly something to shake a person to their core.

Then there's the sequence in which Tim sports an unnatural attraction to a boy of about 10. Is the scene decidedly non-P.C.? Of course. Is it funny? No, but not because it's non-P.C.: Last year's A Very Harold & Kumar 3D Christmas included a slow motion shot involving a young boy and a group of pedophilic priests, and that moment had me on the floor (hell, I'm still chuckling over it). Clearly, almost all taboos can be mined for buried humor, but based on this disaster, Tim & Eric apparently aren't the guys to do it.

Of course, the faithful will disagree, still insisting that I don't get it. I suppose they're right, although in one respect, I did get it — right between the eyes.