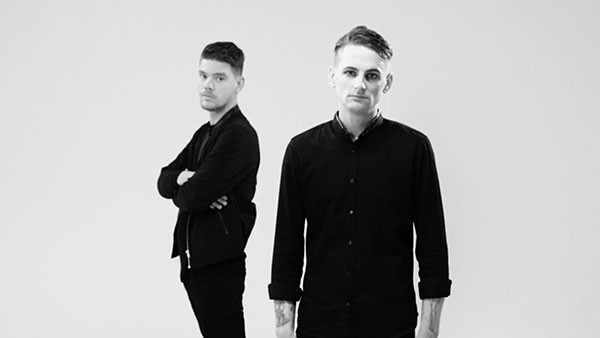 When Jimmy Brown and CJ Hardee started writing more aggressive alt-rock tunes, they weren't sure what to do with them. They didn't fit with the folk/pop rock sounds of Matrimony (fronted by Brown and wife, Ashlee Hardee), the band they were both currently in. And yet Brown, a Belfast, Ireland native, kept writing them on the side with his brother-in-law. It was all following Matrimony's success — the band had signed onto Columbia Records and debuted its first album, Montibello Memories in 2014. But what was then a mystery is now a side project that Brown and CJ Hardee have dubbed Bassh, because it feels more like a party than it does work.

"It's a little bit more aggressive sort of music than Matrimony or anything else that me and CJ have done before," says Brown. "We knew that they weren't Matrimony songs. I had been writing a lot of songs that I was thinking were for Matrimony but I could tell something different was happening creatively and it wasn't so folksy anymore. I was really gravitating towards a different kind of songwriting. CJ would come over and help me with these songs and we both very quickly realized that we had something that was a project and so then it happened very quickly and naturally."

The timing couldn't have been better, since Ashlee was pregnant. It made a Matrimony hiatus appropriate — though the group did return to Charlotte and reunite for this year's Housing Fest, presented by Urban Ministry, at The Fillmore on May 28.

In regards to his work with Matrimony, Brown explains that the future is uncertain.

"Ash and I have sat down recently and talked about making a new record but we don't know when we would do it. I'm really focused on Bassh right now and she's about to have a baby [Update: Brown and Hardee are now the proud parents of a baby girl] and is writing a book at the moment. It's just not the right time for another Matrimony album, though we're not opposed to it."

Bassh has already played Visulite Theatre twice this year and has another show in the works — they'll be back in Charlotte to play Visulite on Oct. 19.

While Matrimony has garnered a huge Charlotte fan base (where they all currently reside) over the years, Brown admits that playing as Bassh has been a different kind of experience.

"We haven't played one show where someone has come up to us and said they remember Matrimony or that they've seen Matrimony before, which has been odd because we thought that there would be that. You'd think that people would be interested to hear what you're up to creatively because they like what you did before but that doesn't seem to be the case," says Brown.

Despite that Brown is positive and excited about the new experience. He explains the feeling as akin to "starting afresh" and believes the band has "taken on a life of its own."

"It's actually been really cool," he says. "Nobody really knows who we are and when we turn up at clubs or anywhere really, we have to win over a crowd. We're usually the opening band and nobody knows our songs or what to expect. It's made me better at performing and entertaining and it's brought me back to the music. I love that feeling. With Matrimony, we had a decent following across the states and you'd turn up and people would know the songs and sing-along and it felt so easy because of that."

While the duo is only comprised of Brown and CJ Hardee, they have a regular drummer that they use for shows and other hire-for-play musicians on hand. They also have plans to add an extra guitarist in the future. The duo is savoring the creative freedom that the project has given them. Brown describes the band's mantra as being driven by creativity and not control. "We thought, 'Let's let this thing take us instead of us taking it," he says.

Bassh currently has around 24 songs, 12 of which have been recorded with producer Bill Reynolds of Band of Horses back in Nashville. The band's first single "Bodies," conjured similarities to Fleetwood Mac, but its second single "Animals," due out later this year, has a different feel. On it, Hardee raps during a portion of the track.

James fondly reminisces over CJ rapping for fun over the course of their years of touring. When he sent Hardee an unfinished version of "Animals," he was pleasantly surprised with the rapping supplements that Hardee added on.

"I remember bursting out laughing because I would never have expected anyone to rap on the song because it was beyond my capacity for thinking about the song. But I thought it was really awesome and I liked the sound of it. So, it became a thing that we do."

The band is slated to go to Los Angeles after the Charlotte gig to record the rest of the songs with a producer that's worked with Twenty One Pilots. They hope to release Bassh's first EP in February or March of 2017.

Along with the band's alternative rock sound and harsher singing, Brown says the songwriting process for Bassh varied from his previous music ventures.

"We kind of wrote these pretty quickly and I think we've both gotten better at writing songs. We're able to trust ourselves more and these have more of a male perspective. Matrimony songs were a little more hopeful and these are exploring a slightly darker side of our personalities and experiences. They're quite vulnerable and a little more tender, too," he says.

There's more distortion and synthesizers, contributing to the soundscapes drastic departure from Matrimony. While Matrimony songs felt upbeat and at times reflective of the duo's love for one another, Bassh presents a slightly more skewed stance on life.

Having seen the group when they performed earlier this year, I noticed the music was louder and angrier with some songs lamenting on heartbreak and the philosophy that "nothing lasts forever."

"Everything should be about constantly renewing yourself and creating things fresh and looking at life that way," says Brown. "It's a theme I have been thinking about and I think that comes through on the songs. You don't have to carry past experiences, you can leave them behind and let them die. In a way, it's a hopeful message, but it usually doesn't come across that way."