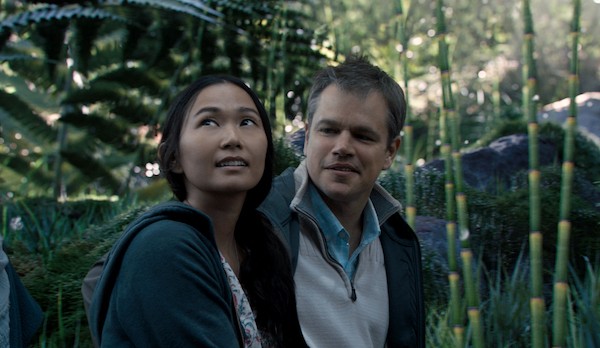 The latest effort from the team of writer-director Alexander Payne and writer Jim Taylor (the Oscar-winning scribes behind Sideways), Downsizing initially feels like a gimmick more than a movie. The downsizing in the title is meant to be taken literally — as overpopulation threatens to irreparably damage the planet, a brilliant scientist (Rolf Lassgaard) invents a way to shrink people. This discovery spurs thousands of ordinary citizens to allow themselves to be miniaturized, all in an effort to preserve Earth’s natural resources, reduce rampant pollution, and other environmentally friendly innovations.

Paul Safranek (Matt Damon) is one such regular guy who decides to check out this alternate lifestyle, yet as the movie progresses, its unique angle seems to recede into the background, with much of the focus on Paul’s daily woes. These include unhappiness at home, dissatisfaction on the job — in short, the sorts of travails that affect everyone, not just people reduced to the size of an iPhone.

Downsizing continues in an almost lackadaisical fashion, but then something remarkable and transformative happens: Hong Chau shows up. The Thai actress (most recently seen on HBO’s Big Little Lies) plays Ngoc Lan Tran, a Vietnamese activist who was shrunk against her will and now serves as a maid for rich people. Chau’s performance is superb — second only to Willem Dafoe’s turn in The Florida Project as 2017’s best — and she roots the movie in emotions that heretofore had largely been missing.

Eventually, Downsizing heads off in yet another direction, but it scarcely matters. Chau’s towering turn guarantees that viewers will follow the picture wherever it elects to venture.