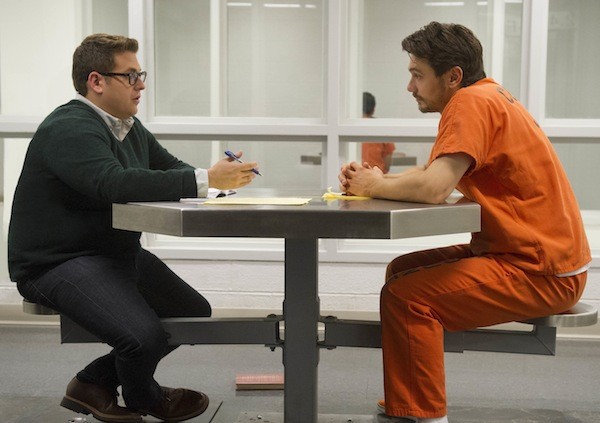 While it may be true that True Story is indeed based on one, the real story is how this intermittently interesting but hopelessly erratic picture bungles what should have been an easy assignment.

Adapted from the book by Michael Finkel, the film finds journalist Finkel (Jonah Hill) being given the boot at the New York Times for embellishing an important story. Following his momentary lapse in judgment (his previous articles for the paper were all sound, demonstrating that he wasn't a serial Stephen Glass sort), he learns that no other publication will now touch him, leaving him plenty of time to wallow in self-pity in the arms of his girlfriend Jill (Felicity Jones). But then he receives a strange phone call, one which alerts him to the fact that a man named Christian Longo (James Franco) has just been apprehended for murdering his wife and three small children. Finkel wonders what this has to do with him until he discovers that Longo was going around identifying himself as journalist Michael Finkel. Intrigued, Finkel arranges a cell visit with Longo, and this kicks off what appears to be both a friendship, as the men seem to genuinely like each other, and a business relationship, since Longo claims he's innocent and wants to give his story exclusively to Finkel for the sake of an article or even a book. But does he end up telling Finkel the truth, or does he just keep piling lies on top of lies?

True Story is more of a character study than a murder-mystery, and for this sort of picture to work, viewers require access into the minds of its players. Think, for instance, of the "quid pro quo" sessions between Clarice Starling and Hannibal Lecter in 1991's The Silence of the Lambs and how integral these sequences proved to be to the audience's understanding of their complex relationship. True Story, on the other hand, never probes as deeply as it must, a fault that rests primarily with the script by Rupert Goold (the acclaimed British stage director making his film debut as writer-director) and David Kajganich but also with the work by its leading players. Hill and Franco aren't bad, but their performances remain frustratingly on the surface — this is especially true of Franco, who often comes across more as a guy peeved that someone tapped out the frat-house keg than a tortured individual potentially engaged in Machiavellian maneuverings. By default, the best moment belongs to Jones, a recent Best Actress Oscar nominee for The Theory of Everything. Her role is insubstantial for the majority of the movie, but she has one terrific scene opposite Franco that makes up for the lack of attention elsewhere.

True Story sports numerous ingredients for a potent drama, including a look at the often cozy nature between journalists and their subjects as well as the philosophical query of whether little lies don't matter as long as they point to a larger truth. But the filmmakers never allow any topics to come into focus, and by the end, Michael Finkel seems even more of an opaque figure than Christian Longo. He also seems even less admirable than when the picture started, which is fine if the movie isn't about redemption. Unfortunately, it doesn't seem to be about much of anything.