New brewery represents out neighbor to the northeast 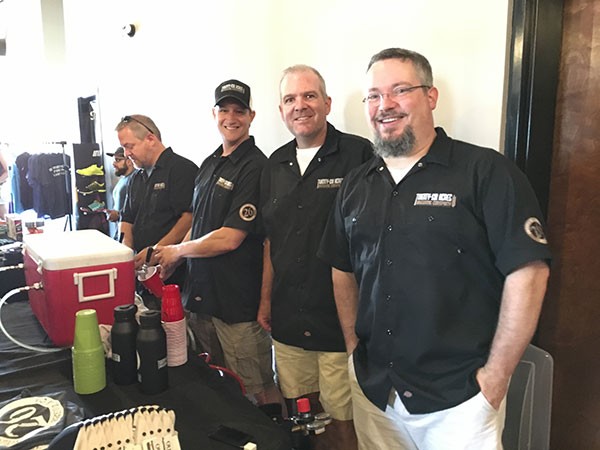 The soon-to-open Twenty-Six Acres Brewing Co. in Concord, N.C., is named after the original 26-acre plot on which the town of Concord was founded in 1796. Two of its flagship beers — Corban Ave. Honey Blonde and 26 Union St. Oatmeal Stout — were named after Concord's equivalent of Trade and Tryon streets. And a welder who's worked with NASCAR designed the LED-lit aluminum and copper tap handles at the brewery's taproom.

Safe to say, it's a place steeped in local history. The personal stories behind it, though, are perhaps just as compelling.

Twenty-Six Acres was founded through two primary factors. First was co-owner Joel Padgett's undying love of beer that made him that guy — "the beer guy" — in the '90s, the one who always had the latest hop bombs and deep stouts before they were cool (sorry hipsters, '80s and '90s beer nerds own that provenance). Second was the World Series of Poker.

Unfortunately, I'm not referring to a jackpot of winnings, but a regular group of guys who get together on occasion to shoot the shit and play cards, and who also go to Vegas together to participate in the real deal. The group is where Padgett first flexed his beer tasting muscles through impromptu flights for his friends, and also where he met his business partner, Wes Ports.

"I tried to form a brewery maybe eight different times," said Padgett. "There's a barrier to entry in brewing."

Ports, who founded the WSOP group with Padgett, stepped in to to help Padgett revise one particular plan that made it farther than the others, and this iteration clicked. Twenty-Six Acres came to life.

"I was born in Concord, so I thought, man, it would be awesome to put a brewery in Concord," said Padgett.

It sounds trite, but Padgett has more point than platitude in his idea.

Concord law, until the passing of a text amendment in May 2015, prevented non-brewpub breweries to have taprooms, thus disparaging a major monetary incentive for potential beer entrepreneurs (a few of which have now emerged). Many of north Mecklenburg's breweries, too, are clustered in the Davidson and Cornelius areas, so the I-77 corridor is paved North-to-South with malt, while one could say I-85 suffers a relative dearth. 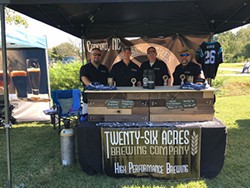 Furthermore, and perhaps most importantly, Padgett lives in Highland Creek, the sprawling suburb community on the border of Concord and Charlotte that contains over 4,400 homes. Padgett estimates thousands of folks from that neighborhood trek close to 20 minutes each way to get to a brewery. When Twenty-Six Acres opens, it will be minutes from Highland Creek, much closer than other Concord brewing start-ups such as Cabarrus Brewing Co. and High Branch Brewing Co.

"No one is here but it makes no sense," said Padgett.

Twenty-Six Acres is located in a business park across from Concord Regional Airport, an area that calls to mind the locations of Cornelius's D9 Brewing Co. and Ass Clown Brewing Co. The inside is spacious, with concrete floors, an air hockey table, high ceilings, filament lights, and a bar adorned with patterned, multi-colored wood.

In the back, a man named "Tater" — aka Eric Troutman, Twenty-Six Acres' head brewer — will be working his magic on a new 15-barrel system, though currently the brewery is making inventory on a 2-barrel experimental setup.

Padgett hesitates to give Troutman's brews a style — "We're agnostics," he says — and he talks a lot about his appreciation for how Troutman's beers defy expectation. It's easy to want to raise an eyebrow at his metaphors and artistic rhapsodies (see: "If people see a painting, and it calls to them and they see 'it,' they become into art; same thing with beer."). But when it comes to his brewery's beers, Padgett deserves leeway. I only had two of the brews, but they were good. Beyond expectation.

The Honey Blonde was clean, creamy, and subtly floral, much like orange blossom honey. Industrious People Ale (yes, an IPA) was tropical, with ripe pineapple and tangerines up front, some toasted coconut and alcoholic warmth on the back, and a faint hint of gummies. Many "juicy" IPAs have a syrupiness that relegates you to only having one (or two). This beer did not suffer that symptom at all.

Padgett plans on having a few invite-only soft openings in the coming weeks. The brewery will hopefully open sometime in the next month.

"We've written business plans for multiple scenarios, and I don't have a driving ambition that takes me much past being a brewery that the neighborhoods continue to come to," Padgett said. "What I want to do is retire doing what I love, and retire in comfort, in the same house I'm in, and without worrying about paying bills."