UrbanZue is the underground event you've been waiting for

The Nu Hippie movement has a home 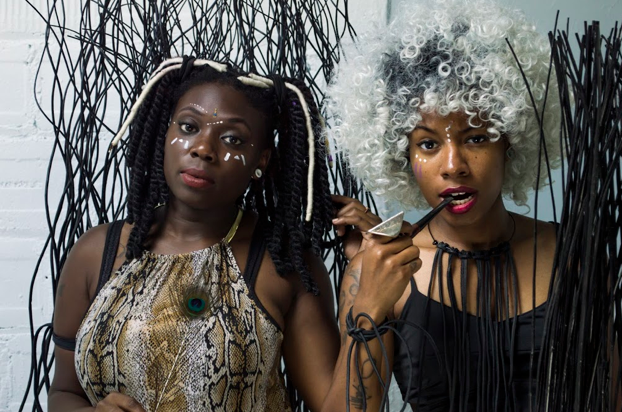 The Charlotte underground Afropunk scene is searching for a signature look and sound while the counterculture bubbles just under the surface, seasoned with just the right amount of artistic edge. Now, two emerging fringe culture leaders have tasked themselves with finding the talent in this Charlotte gumbo that exudes the flavors of punk, hip hop, R&B, soul, folk and street art.

The sounds, look and vibes that flow from an UrbanZue event make up the Charlotte underground scene so many have been looking for.

This taskforce of Charlotte Afropunk hunter-gathers has branded itself UrbanZue. Loude Zue, 23, and Zue Moe, 23, are the founders and leaders of this eclectic Nu Hippie movement. UrbanZue is a social media and event marketing agency that uses social currency to push Charlotte’s underground Afropunk sights and sounds to the forefront of Queen City culture.

Moe describes the collective as “a networking of art.”

Loude sees the collective as makers. “We like to consider ourselves a maker business. We transform what we do base on who we work with, and what they need from us and what we can cross-promote from each other,” she says.

"Now, with the UrbanZue art gallery, it is a culmination of all the work we have been doing. We have been meeting with bloggers, writers, visual artists, musicians and everybody creative. That is why this party — this show that we throw — works. We have been promoting them anyway and we all come together and promote each other and network. It becomes a big giant network party,” says Loude.

The Zues will be bringing their UrbanZue Visual Jungle art gallery to Studio 1212 on Saturday, July 9th, so Creative Loafing dove into the amazing musical line-up so you'll know who and what to look for. The event is filled with live painting, visual art vendors, dope choreography and top notch underground Charlotte sounds. Below we give you a quick snippet of just a few of the sonic samplings attendees will be exposed to on this Nu Hippie artistic excursion.

With half-shut eyes casting a dreamy haze upon listeners in her range, this bohemian street chic Illinois native draws listeners in. Mori Bea's airy vocals are reminiscent of a Corinne Bailey Rae timbre, but her lyrics and style harken to that of St. Beauty, the female duo signed to Janelle Monáe’s record label Wonderland. Formally trained as a theater actress with deep roots in poetry, poems layered with melodies pulled Mori into the world of music artistry. She has been singing professionally since 2013. Mori proclaims her sound to be for the “Hood Hippies” that dwell in Charlotte. With a mixture of jazz, indie, folk, synths and experimental hip-hop beats, Mori pulls listeners into a perpetual dream state in her latest mixtape “Late Night Talks”. Mori will be lulling attendees at the UrbanZue Art Gallery on July 9th, but until then you can get a sample of her sound on her Soundcloud page.

The Charlotte-based singer-songwriter band Blame the Youth has a sound that would fit perfectly in a concert line-up with folk singer Justin Nozuka, popular singer-songwriter John Mayer or the high volume sounds of Alabama Shakes. This band is composed of lead vocalist/guitarist Phoebe, lead guitarist Alexa, drummer Kynadi and bassist Amber. On their first single “Earworm”, the brooding soulful folk sonic signature that permeates from the speakers is described by the band as “an eclectic mix of alternative and soulful sounds with a little rock and jazz with the goal of bringing people together.” Until UrbanZue, you can sample the sounds of Blame the Youth on their Facebook page.

Mellow the Abstract's laid-back style has been in the honing process over the past three years. His rap cadence is similar to the sound of a turned-all-the-way-down version of Roc Nation signee Vic Mensa. The beats the Queen City emcee flows over exude wavy vibes that would be perfect for any hip-hop lounge session (think Digable Planets). Downtempo piano melodies, shaker rhythms, bass drum kicks, boom bap snare snaps and skating symbol strikes fill his tracks. He often explores the topics of love, infatuation with some current events sprinkled in and tons of references to keep those laidback vibes cyphering through the atmosphere. To experience a sample of the sounds of Mellow the abstract now, visit his Soundcloud page.

If you love the sounds of Travi$ Scott, then you will more than likely become a fan of Fayetteville native King Ashley. This Charlotte high school science teacher by day is also one of the Queen City’s hardest working mix tape rappers by night. Her first mixtape, I Give You The O.K.A.Y., created in just 4 months and released in 2014, landed King Ashley a distribution deal with Universal Music Digital Group 6.2 and a management deal with Entertainment S.A.M.E Booking Agency. For a sample of the King Ashley sound visit her Soundcloud page.

Vocalists aren't the only ones showcased at an UrbanZue event. Attendees will be exposed to rappers, singers, choreographers, visual artists and instrumentalists. To add to the above-listed musicians (and many artists we couldn't get to in this article), percussionist Patrick Buckley will be taking the Studio 1212 stage on Saturday to captivate the audience with his cadences.

A percussionist since sixth grade and trained in the rudiments of drumline throughout high school, Buckley has been perfecting his craft through relentless practicing. He bought his first drum at 16 years old and is now a percussionist instructor at the Charlotte Academy of Music. You can find him playing heavy metal, hard rock, hip-hop, R&B, funk, jazz, lo-fi, drum‘n’ bass and electronic dance music around Charlotte. That's a broad list, so to get a better glimpse of what Buckley can do on a drum set visit his website.

The UrbanZue Art Gallery experience is a unique sensory experience that combines all sectors of arts. The above is just a peek at a handful of talented people serving up art from the music sector. There will be many more Nu Hippie sights & sounds to experience on July 9th from 6 p.m. to 11 p.m. at Studio 1212 with Loude, Moe and the UrbanZue family.