Graffiti for the chicken-hearted

While a Fried Chicken Art Party might conjure images of flying chickens and greasy lick-your-fingers drumsticks, the upcoming art show dubbed as just that will actually focus on graffiti.

The event, going down on Friday, May 6 at Studio 1212, features various mediums of artwork inspired by the guerilla art form. A happy addition: beer from Pabst Blue Ribbon and fried chicken from Price's Chicken Coop will also be provided.

"Graffiti/street art confined to a gallery setting is already like a taxidermic animal that made its way to a zoo," says Matt Fletcher who is participating in the show. "When you intergrade what belongs outdoors and domesticate it to being indoors, you at least need chicken and beer." 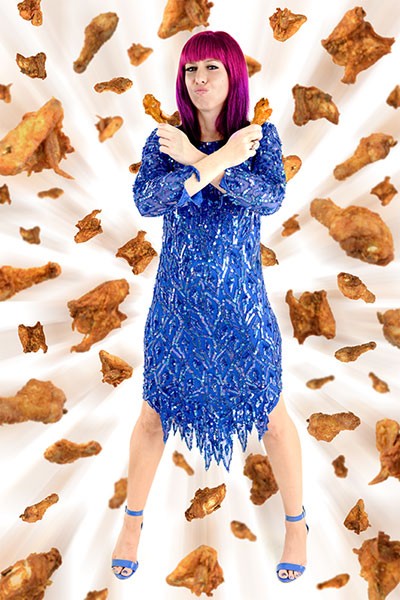 For local artist Phoebe Alicia, who organized the event with Fletcher, co-owner of Armada Skate Shop in Plaza Midwood, graffiti has long served as a means of giving the voiceless a way to be heard.

"I like that it gives people a voice that normally wouldn't have a voice and also it's something that really appeals to me because there's so many people making lower income and no one really hears them," she says. "That's kind of why I've always been an advocate for street art."

Despite graffiti's role as a form of social activism, negative connotations related to the art form prevail. Drawn to graffiti and skateboarding in her youth, Alicia admits the subculture holds unfavorable associations with rebellion. Skating restrictions, loitering laws and lack of support have left skaters and artists in dire need of space.

In regards to the relationship between skating and graffiti, Fletcher explains, "The two go hand in hand seemingly because it's a matter of interpretation, of the natural/unnatural lay out of your cityscape. Both milieus tend to be a brigade of alienated youths but very diversified in its practitioners," he says. "Both are great vessels and catalysts for discipline and just overall purpose."

In regards to space, Alicia feels there's also a certain alienation that comes from being a skater and/or graffiti artist.

"A lot of times you're going into industrial areas," she explains. "You just want to paint there and make it your own spot. It's kind of like you're claiming your territory."

But the marking of territory has undoubtedly led to graffiti's associations with the wanton destruction of property by delinquents and gangs as a way to mark territory. Growing up, Alicia was a law abiding citizen, for the most part. She got in trouble with the law twice for spray painting in public. Then, she took her art behind closed doors.

"I was like 'I'm not doing this to my parents,' and I didn't want my friends' parents to be afraid to let them hang out with me," she says with a chuckle.

Her experiences highlight a very real problem with past and present misunderstandings about graffiti. She believes folks continue to struggle to see graffiti's value in the art world, due to notions mostly related to vandalism. 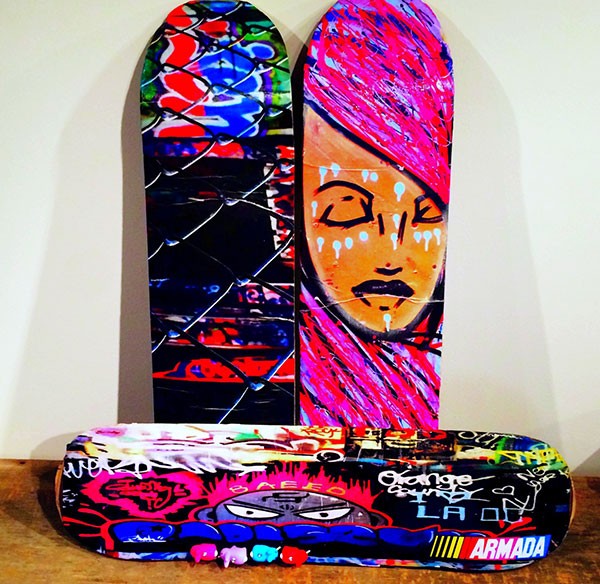 Alicia, who lived in Orlando, Florida and Charlotte, North Carolina as a child, moved back to the Q.C. after a stint in California. After attending the Art Institute of Charlotte and honing her craft for painting and photography, she began to reexamine and incorporate her love for graffiti into her work.

In February of 2016, she traveled to Los Angeles, California, to visit Murphy Ranch, an abandoned pro-Nazi compound. Built in the 1930s and obtained by law enforcement in the '40s, the area later became a stomping ground for graffiti artists, who used their spray cans to tag buildings, and even trees and plants, on the property. But disrepair and development in the area led to its demolition earlier this year. Alicia, who visited the site just before the demolition was to be finished, ventured into a ritzy Santa Monica neighborhood to find a trail leading to the artsy haven.

For the Fried Chicken Art Party, Alicia will showcase artwork inspired by the trek. She took photos of graffiti at Murphy Ranch and she's wheat-pasted them to damaged skateboards, given to her by the folks at Armada.

Fletcher says this isn't the first time the skate shop has provided skateboards for art shows and he plans to continue to facilitate and provide boards, whether new or discarded, for art shows.

In Alicia's case, the project draws parallels between the refurbished skateboards and her photographs, which showcase graffiti from a compound where tagging flourished, if only for a short time.

Alicia laments on the fact that street art, especially graffiti, can be challenging. In Florida, she was fortunate to know a building owner who encouraged tagging on his property. But because of high demand and lack of legal space for tagging, artists continuously tag over one another's work.

"That's just kind of a part of the cycle if you're into this kind of artwork and you're going out on the streets and doing stuff," says Alicia. "You've got to expect whatever you do will get covered unless you've been commissioned by someone that owns a building. That's probably the only way your stuff is going to stay up for a long period."

In the case of Murphy Ranch and other spots where she's traveled to snapshots of graffiti, Alicia hopes to preserve and share the short-lived art with others. 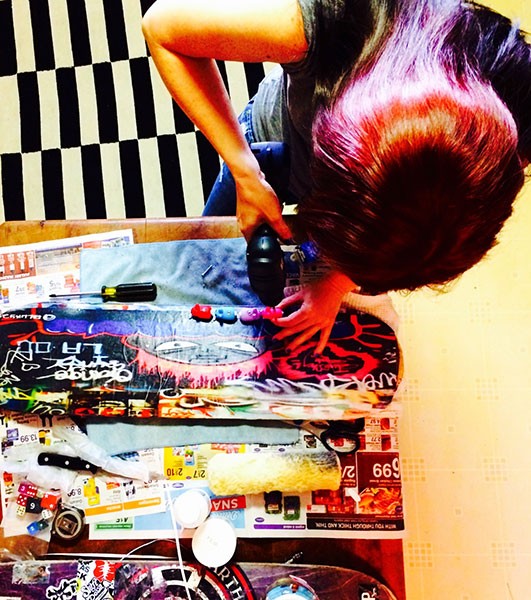 "When I travel I pretty much go to some of the most awful areas and see some of the most fascinating things that I've ever seen," she says. "Because of people tagging so quickly over everybody's art, I like to capture it with my photography and then wheat-paste it to walls and stuff so artists will actually see these things because otherwise it's gone so quickly that no one gets to see it."

The Fried Chicken Art Party will also feature art by three other Charlotte artists — including Rebus (Fletcher from Armada) and Joey Obso —and another artist, Spclgst, from Raleigh, North Carolina.

Fletcher, who will have several pieces in the show describes graffiti as "a learning institution in itself."

"I've tried to segue the education and principle to detail of spray painting over acrylics, which is my primary medium" says Fletcher. "I try to recapitulate the same boisterous attention grabbing imagery that graffiti has on the average civilian, but with serialism imagery."

While Alicia acknowledges Smokey Contraband and Culture Initiative as being critical to Charlotte's art community, she feels that more needs to be done, especially in the realm of graffiti.

With aspirations to draw more artists in for future shows, she plans on taking this project to other cities like Atlanta, Georgia; New Orleans, Louisiana; and Nashville, Tennessee.

For a future Q.C. event, she also intends to find a venue where onsite tagging can go down. In that way, she aims to strengthen the community of graffiti artists, while sharing graffiti works with folks who are unfamiliar with guerilla art.

Alicia has been tagging in Orlando, Florida, as opposed to Charlotte, where public property legal for tagging is almost non-existent.

"I've met a lot of lawyers in town because of other work I do and I'm like 'I don't want to have to call them to pick me up for spray painting on a wall,'" she says.

For Alicia, part of the solution lies in clearing up misconceptions about graffiti.

"I want more recognition for street art. I'm not saying that there's no recognition at all, but I just really feel like more could be done. I don't think that most people have the mindset that graffiti is about someone expressing themselves. They just think it's juvenile delinquents and vandalism and it's not. If I can get one person that sees street art differently after the show and that has a better appreciation, that's enough for me."