What's happening with The Light Factory?

The arts organization has found a new home 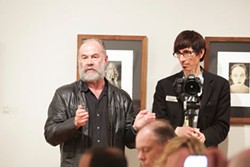 One crisp November day, members of The Light Factory united for a tedious task. They sifted through closets and cabinets of their offices at Spirit Square to purge and pack up 41 years of stuff, from old catalogs to camera equipment. In early October, the longtime Charlotte nonprofit arts organization specializing in photography exhibits, film classes and youth outreach programs temporarily ceased operations, due to financial declines of the last three years.

Thanks to meetings that have re-examined TLF's finances, the organization has found a new home inside Midwood International Cultural Center (formerly Midwood High School) and is working to develop a strategic plan for the future.

Midwood International is a teaching center that provides English language and citizenship classes to immigrants. Other nonprofit organizations, including One Ethiopian Community of Charlotte, also rent space in the building. TLF will occupy the former kitchen and cafeteria, which measures more than 2,200 square feet. Walls will be built for a dark room, two exhibit rooms, an office and a classroom. Classes for introductory and intermediate photography will begin early next year.

The 21-member board is planning to hire a part-time consultant who will help analyze grants that TLF qualifies for during upcoming months. "After that, will determine how we fund in the long term. The board is using a lot of their money to pay the rent, for example, for the first year. We have to fund the consultant and we have a debt, but after a couple of campaigns we should be able to take care of that," says Phil Moody, a new board member and photography professor at Winthrop University. Moody believes the organization's sustainability will come through increased TLF membership, which currently numbers around 250. A basic membership costs $35 for students and educators, $50 for individuals and $75 for households.

For now, Moody says, the organization is operating on a volunteer basis. Its mission, to provide compelling photography exhibits, film screenings and educational programming, continues.

"It's been very challenging. We all have full-time jobs. The volunteer effort has been terrific," Moody says. "We're definitely not going to be an artists' collaborative, for example. We're taking on the current model [of being volunteer-run] because of sheer need and then we'll be developing a strategic plan for the next two years."

Over the last four years, TLF's staff continually dwindled, from a height of eight down to just two in the weeks before the suspension of operations. Laurie Schorr, who worked as an interim education director and taught photography classes, was one of those laid off. She plans to continue to support and teach photography classes for TLF.

"I still want to be involved because I love the mission," Schorr says. "The folks who are involved are incredible. It's an over 40-years-old nonprofit arts organization and it's going to continue to revive itself because it's got such a huge following and a strong community."

Moody says, "There's no sort of magic answer, but I think the sustainable model is going to be built on enthusiastic members who will build a bigger base than we have right now."