Which frozen yogurt should you choose?

Depends on your personality

When the last gasps of summer get you down, there is no lack of frozen yogurt in Charlotte to chill you out. The number of fro-yo shops has more than tripled in the past few years, but choosing the right place to dump your hard-earned money can be a challenge, depending on whom you choose to lick spoons with. 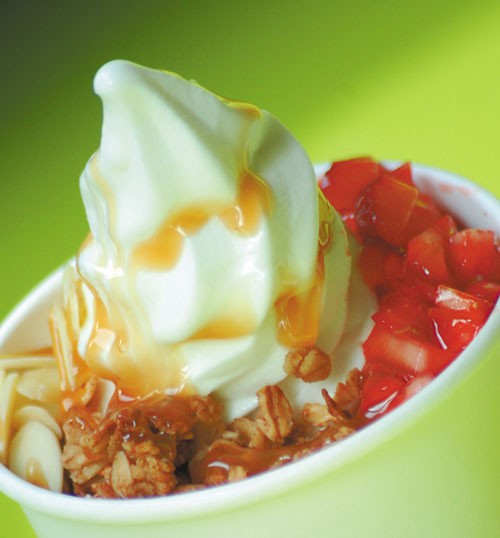 If you use fro-yo simply as a topping delivery system, you will be happy to know that, with few exceptions, the topping bars of Charlotte's frozen yogurt shops can be broken down into the following categories: 1/3 healthy ingredients (fresh fruit and nuts), 1/3 unhealthy ingredients (candy, syrups, baked crumbles like brownies), and 1/3 middle-of-the-road ingredients (granola, graham crackers, cereal, dried fruit). The real differences are in the yogurt used and the vibe of a particular shop.

How can you tell which frozen yogurt shops do things your way? Glad you asked. Here are our rankings of some of the Queen City's most popular fro-yo joints.

In Charlotte's cookie-cutter frozen yogurt scene, Tasty Yo stands above the rest. It is one of only two non-franchise frozen yogurt shops in town, but more than that, it is a business that strongly supports other local businesses while offering a high-quality product. Tasty Yo offers toppings and flavors, like antioxidant-rich tart Blueberry Acai and homemade granola, that tend to be healthier and less sugary than yogurt found at other Charlotte frozen yogurt shops. You will find less of a selection at this home-cultured fro-yogurt business, but you will also find a friendly local vibe that encourages suggestions, questions and conversation. This is the only stop on Fro-Yo Tour de Charlotte where you will hear only local music, and most of the ingredients come exclusively from the local area. Additionally, Tasty Yo puts remarkable effort into limiting it impact on the environment, with biodegradable and compostable utensils made from 100-percent corn products.

Tucked away in a large shopping center in the University area, Fruiti Cup's primary customers are UNC-Charlotte students, and it's a good thing, because they might be the only ones who know the shop is there. But what Fruiti Cup lacks in local recognition, it more than makes up with menu items that far exceed the typical offerings of your standard frozen yogurt business. Fruiti Cup offers the variety of toppings that you would expect in a large franchise, but also features milk tea (a sweet blend of green tea and milk), fruit smoothies and coffee. At a mere 42 cents per ounce, Fruiti Cup's yogurt is among the least expensive in Charlotte, which is good for the limited bank account of your standard 19-year-old.

We give Yoforia props for attempting to be healthy and being upfront about the struggle to do so. On the Yoforia website, they admit to using a base that includes (among other things) dehydrated glucose syrup and modified vegetable gum, but also welcome suggestions for alternatives. The frozen yogurt chain stands out among this crowd with its use of organic milk and yogurt from two large-scale organic dairy companies (Organic Valley Milk and Stonyfield Organic Yogurt). With exotic ingredients like lychee fruit and rotating fro-yo flavors like almond butter, it is clear the company wants to be the Whole Foods of the frozen yogurt industry, and struggles with commercialism like any large-scale business. The company's candid take on the issue and transparency coupled with a large selection of rotating flavors and standard toppings is why we rated Yoforia ahead of other large-franchise Charlotte fro-yo shops.

TCBY is the old timer in this group. Back before there were fro-yo shops in every neighborhood, TCBY was one of the only places you could get frozen yogurt in Charlotte — or anywhere, really. One of the reasons "The Country's Best Yogurt" has been able to maintain its success is because it has changed with the times. When self-serve frozen yogurt started to gain popularity, TCBY opened up the first self-serve shop in town. In recent years, it has re-branded its yogurt as "Super Fro-Yo," maintaining that it meets self-imposed guidelines, such as a minimum of 3 grams of fiber per serving and at least 20 percent of the daily value of calcium suggested by the FDA. We're not sure if that makes the yogurt "super," but for those who have jumped on the high-protein Greek yogurt bandwagon, you'll be happy to learn that TCBY recently unveiled its first Greek frozen yogurt flavor, honey vanilla, and plans to release more in the future.

One step into Menchie's and it is evident that the place was made for kids. Children's drawings are hung on the florescent walls. A fishbowl-style kid's room is equipped with hula hoops and coloring pages. At the register are stickers, pencils and other kid-friendly knickknacks that come a dime a dozen and appeal to the under-10 crowd. Menchie's is usually hopping with tykes, especially when the weather is nice, which may send the kid-wary running for the hills, but it is a great place for families. Like most large fro-yo chains, Menchie's wide selection (all of which are kosher and many of which are sugar-free) rotate throughout the year based on the seasons. Additionally, Menchie's takes care to make sure its yogurt is made from cows with no artificial growth hormones (rBST).

With the most expensive cost per ounce before toppings ($3.50 for a 5 oz. small = 70 cents per ounce), this fro-yo shop is by far the worst deal among those we tried. For comparison, the other six shops cost anywhere from 42 to 60 cents per ounce. Customers can choose two toppings for an additional $1.45. For those who want the ultimate upgrade, Pinkberry offers "luxe" toppings like Nutella, but it's going to cost you. The prices, coupled with the yogurt shop's discreet location in the swanky Phillips Place shopping center, means you won't encounter any riffraff on your frozen yogurt run — unless your idea of riffraff is Mercedes soccer moms.