Which Way Did Delmar Go? 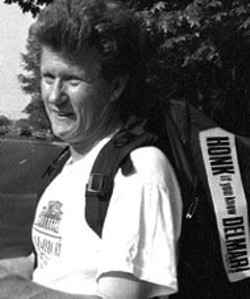 If you were in Charlotte in the 80s and liked to party, you probably know, or at least know of, Delmar Williams. A party just wasn't a party unless Delmar made an appearance. This was especially true of the once wildly popular Tacky Parties, usually held in warehouses and attended by folks decked out in -- as the name suggested -- the tackiest clothes they could find. Delmar became such a fixture at these events that one year, an extra dollar at the door got you a "Honk If You Know Delmar" bumpersticker, which became a common sight around town for years.

"Delmar was one of those unique individuals who knew where every party was, and could have a conversation with anyone," said Charlotte hipster and longtime friend, Hope Nicholls.

While Charlotte's party scene has become far less insular and the Tacky Parties have gone the way of 80s hair bands, Delmar is still quite the man about town. You can often find him window shopping at Phillips Place, taking in a Gallery Crawl at NoDa, or checking out a movie and having dinner in Myers Park. But it turns out Delmar is much more than just an 80s social barometer and unique local character. While you weren't looking he became an extensive world traveler.

Since 1981, he has visited over 60 countries, usually taking at least one, sometimes two big overseas trips each year. As you can imagine, the man has some stories to tell, and he's not shy about sharing.

Despite his reputation as a world-traveling party animal, Delmar isn't some slick, cosmopolitan lothario. You're not likely to find him standing in the middle of a crowded room with a gin and tonic in his hand regaling the ladies with his tales of adventure. He's more likely to be the guy in the corner explaining in great detail the best place to get ice cream in Thailand, or what the geysers of New Zealand look like at sunset.

"He's a genuine eccentric," said longtime friend and travel partner, Claudia Bloom, who now lives in Dublin. "And I use that in the most positive sense of the word."

The two met back in the 80s when Delmar was at the peak of his party-going ways. Bloom, newly divorced, was just starting to get back into the social scene. Some friends had invited her to a party, but failed to show up. She was on her way out the door when a buzz of excitement shot through the room.

"Everybody was all excited that Delmar was coming to grace their party with his presence," Bloom said. "I thought he was quite a character, and went up and introduced myself. We became friends, lovers and travel partners. He's one of the nicest, sweetest people I've met."

He's also the perfect interview subject. Ask one question and a locomotive of words rushes toward you. They might sometimes veer off in an unexpected direction or shift abruptly from one subject to another, but they're almost always interesting, and oftentimes educational. With a slight build and a head of fluffy brown hair, Delmar is like a walking travel guide, able to rattle off the capitals, attractions and highlights of some of the most obscure countries. (He was recently on the winning team at the Charlotte World Affairs Council Quiz Bowl.)

Delmar, 48, attended North Mecklenburg High School, and then UNC-Chapel Hill, where he majored in political science and graduated in 1976. He left behind quite a legacy at the college when, on a dare, he ran for Homecoming Queen and won.

"I stayed until my money ran out," he explained.

Delmar came back home from that first trip not only a wiser and more experienced traveler, but with a strong desire to see and do even more. "I wanted to experience for myself all the things I had heard about or read about in books," he said.

He got a job with the Post Office in 1985, which allowed him to take extended vacations each year. By then he had met Claudia, and the two were soon exploring the world together -- over 40 countries in all, including New Zealand, Israel, Egypt, India, Mexico, Greece, Turkey, Bolivia and Peru -- and creating a bevy of lasting memories. They saw the beautiful Taj Mahal in India. They witnessed giant hot springs and geysers erupt in New Zealand.

"We got there at sunset, and it was just an unbelievable sight," Delmar explained. "You had this glowing red and orange sunset and these giant white plumes of steam shooting up 50 feet in the air. They sounded like the roar of a 747 jet engine. It was unbelievably intense."

"It was surreal," Bloom added. "Like something you'd expect to see on another planet."

While visiting the island of Crete, the couple was welcomed to a traditional wedding, which can often go on for days.

"We were driving by this little roadhouse near the beach and all of a sudden we heard all this gunfire and commotion," Bloom said. "It turned out to be a wedding. There were hundreds of people and they welcomed us in and we danced and ate and sang; it was a wild time."

Bloom says her most memorable trip with Delmar was when they drove thousands of miles along the legendary Silk Road, an ancient trade route from Europe to China. They traveled through the cities of Uzbekistan, Kazakhstan and Turkmenistan (where Delmar delivered a 20-pound bag of rabbit food to a friend of a friend) and into Istanbul and Turkey.

"It was mostly by a series of 20-year-old Russian cars with no springs," Bloom said. "For about a month we basically ate nothing but rice pilaf with cooked sheep in it. There was no alcohol whatsoever because these were all in Islamic countries. Most of the time we had to stay with different families because the hotels were not fit for human habitation. It was a remarkable trip, but I don't think I would want to do it again.

"Delmar is a great guy to travel with if you have the stamina," Bloom continued. "All I have to do is show up with my passport and he's got everything planned. But it's an exhausting experience because he has this indefatigable quality to him. He can drive for 18 hours straight across the deserts of Mexico if he wants. And he remembers everything. I'll have this vague memory of eating at a restaurant on a trip we took 10 years ago, and he'll be able to name the restaurant, what we ate, and what else we did that day."

Like any traveler, Delmar has seen his share of woes, too. He said his worst experience was being robbed in Brazil.

"It was in broad daylight and these two guys grabbed me, one around the neck, the other around my legs, and threw me to the ground. I felt like a roped calf."

Delmar had another scare while in Bolivia near the town of La Paz when the tour bus he was riding encountered an angry mob of striking public transportation workers who had set up a blockade. Friend Mike McGuire, who owns New Waves of Joy in NoDa, was with Delmar on the trip, and recalled what happened next.

"The bus driver tried to go through the blockade, and all of a sudden this rock came crashing through one of the bus windows," McGuire said. "Delmar was on the floor before anyone knew what had happened. I said "Delmar, what are you doing, man?' He started yelling "get down! get down!" I had never seen him so scared. Luckily we made it into the city OK."

This year Delmar has traveled to England, Scotland, Wales and Ireland. In the coming years he hopes to visit China, Guatemala, Belize and Africa, some of the few remaining countries where he hasn't yet been.

"Vacations to me aren't about relaxing," he said. "On every trip my goal is to see something that just blows me away; something that I'll remember forever." Despite his world traveling, Delmar says Charlotte is still where his roots and home are, although he has flirted with the notion of retiring in Mexico.

"The people, food and architecture are all great; what more could you ask for."

As for any lesson he's learned during all his travels, Delmar had this to say: "I've learned that most people are friendly, and will help you out if you need it. I also learned that just when you start to think you you've seen it all, you realize there's always so much more."