Wild about (another) Harry

The Dresden series, from page to television 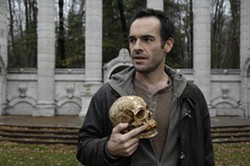 What is it with wizards named Harry? As the world awaits the final installment starring one Harry, I want to introduce you to another: Harry Blackstone Copperfield Dresden.

This Harry was named by his father after three magicians: superstar magician Harry Houdini; one of the other most prominent magicians of the 20th century, Harry Blackstone; and the more recent showman David Copperfield.

The character of Harry Dresden first appeared in author Jim Butcher's Storm Front, published in April 2000. In addition to being a wizard (and listed in the phone book as such), Dresden's a private investigator in Chicago. White Night, released last month, is the ninth book in this edgy, witty series.

In Storm Front, we first meet Dresden as he struggles to make a living in Chicago and manages to piss off members of the White Council -- a kind of governing body for wizards -- with nearly everything he does. He works on occasion with the Chicago police as a consultant called in by Lt. Karrin Murphy, the head of the Special Investigations unit.

This Harry is different from the kid with the round glasses -- he's rough around the edges and has a definite dark side. What he does have in common with the younger Harry is that Dresden's parents died when he was young, too. In the books, the back story is that the young Dresden was taken in by a Warden for the White Council, Justin DuMorne, after his father, a traveling magician, died. Dresden's mother -- and the person from whom he inherited his abilities -- had passed away during childbirth.

Harry has matured a bit in White Night -- he's got more responsibilities now. First, he was drafted to be a Warden for the White Council. The Wardens are kind of the enforcement arm of the Council, and they've been shorthanded because of an ongoing war with the Red Court of vampires. Second, he has an apprentice named Molly, the daughter of one of his closest friends and allies, Michael, a knight of the Cross.

As usual, when supernatural trouble is brewing in Chicago, Dresden is called in -- but things are a bit different this time. Murphy has been busted down to sergeant because she went AWOL in a previous adventure to help Dresden. This time, she needs him to help investigate a series of murders that first appear to be suicides. Murphy thinks the suicides are staged. Dresden senses the magic behind the murders and the hunt for a serial killer is on.

White Night is densely plotted with some well-placed twists. Dresden has strengthened some of his own magic simply by reviewing the basics with Molly. He, of course, sees something of his own rebellious nature in the girl. As usual, Butcher has Dresden careening from philosophical discussions to terse exchanges with his nemesis, Chicago crime boss Johnny Marcone, to burning down buildings -- cracking wise all the way. On the downside, Butcher seems to sometimes throw in everything but the kitchen sink here -- almost like he was writing along and thought, "Oh, this character hasn't made an appearance -- better write a scene." Dresden snarls a lot, too, which seems a bit heavy-handed.

On the whole, though, Butcher's writing style tends to be more breezy even while retaining a darker edge. Readers identify with Harry Dresden because he's not perfect and he's often insecure, wizard or not.

In January 2007, Harry Dresden made the leap to the small screen when The Dresden Files debuted on the SCI FI Channel.

A television series is by nature very different from a book series, as stories and subplots have to fit within an hour or, occasionally, a two-hour slot.

In this case, scriptwriters have cannibalized the books, taking bits and pieces of plots and stories. But on the whole, the quality of the show is very good. The two main quibbles I have are that they replaced Dresden's infamous car, the rattletrap Blue Beetle, with a Jeep, and they cast a dark-haired woman (Valerie Cruz) as Murphy. In the books, Murphy is a petite blond, which I thought contrasted nicely with Dresden's tall and dark looks. There are some other minor differences: Murphy's first name is changed to Connie, Dresden is taken in by his evil but rich uncle when his father dies, the White Council is called the High Council, etc.

The show has also modified some elements in ways that really work better for visuals. Take Bob, for instance. Bob is an ancient spirit who has been imprisoned in a skull. He's worked with many wizards over the centuries and serves as a sort of confidante, sounding board and computer of arcane knowledge for Dresden. (Computers tend to go haywire around wizards.) For the television show, Bob "appears" from his skull as a sort of ghost personified by British actor Terrence Mann, a device which works extremely well.

Also, I really like the actor cast as Dresden, Paul Blackthorne. He's tall, thin and dark -- although perhaps not quite as tall or thin as implied in the books. He's kind of scruffy in an endearing way. Butcher describes Harry as having sharp features, and Blackthorne has more of a round face. But Blackthorne's voice is good -- he uses a Midwestern American accent even though he's British -- and now when I read the books, I find myself hearing his voice.

Much of Dresden's wisecracking personality in the show is taken directly from how he has developed in the books. However, in the novels, he has much more of a hard, dangerous edge. In both, his past is a bit murky, and we know he's attracted to the dark side.

Still, in both mediums, Dresden is the sort of guy you want to know -- you want to hang out with him down at the pub for a beer. He's an everyman sort of wizard, stumbling around a bit sometimes -- a lot like the rest of us -- trying to do the best that he can and protect the people he cares about.

Currently on hiatus; as of press time, no word on the SCI FI Channel web site about renewal for another season.