Making the trek from garbage dump to gallery wall 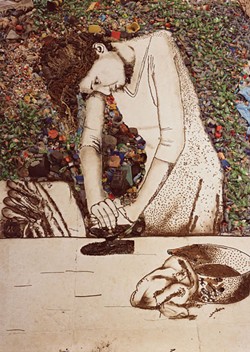 Civilizations high and low deal with garbage produced by too many people living too close together.

Policies have developed around a common mindset: out of sight, out of mind. Burn it, bury it, drown it in the deep blue sea. The policies worked out well enough before the backwoods dump became the neighbor's backyard, before paradise was paved for the masses moving into cities to live in little boxes inside of big boxes. "Out of sight, out of mind" became easier said than done. Alternatives were explored. Global consensus prevailed: Pile it up higher and farther away.

Jardin Gramacho is one of the world's largest landfills, 20 miles north of Rio de Janeiro, in Brazil. The pile began with a single truckload in 1978 and now is a 60-million-ton landscape of rotting and burning debris oozing carbon dioxide and methane gas. The rolling hills of Jardin Gramacho tower above Guanabara Bay, an ecologically sensitive wetland now serving as a safe sanctuary for vultures. When the wind is right, the stench floats across dinner tables in downtown Rio.

A Brazilian artist now brings that landfill to Charlotte. Vik Muniz: Garbage Matters is the result of the artist's collaboration with garbage pickers, or catadores, who roam these fetid hell hills culling recyclables from Rio's rubbish. These stunning pieces born from the picking and rearranging of garbage now hang on the clean, well-lit walls of the Mint Museum Uptown.

"Woman Ironing (Isis)," inspired by Picasso's "Woman Ironing," is Muniz' grandest replica masterpiece here. Muniz has a peculiar talent for teasing decorative texture from the flat photographic reproductions, and with this piece he's at his best. The stark, line-drawn figure against a lush tactile ground conspires to lift "Woman Ironing" above her photographic neighbors on adjacent walls.

He used lines of bottle caps, small steel 'o' rings, nuts and bolts to draw the woman's figure; the pleats in her skirt are a line of flip-flops; her hair is a weave of coiled rope, tires and frayed string — dred locks. The figure is graphic black and white. The space surrounding her is all color and thrumming texture. From a distance, the background looks organically quilted, carefully arranged and beautiful. Up close, it's just Rio's rejectamenta: green and brown plastic bottles, fleshy baby doll body parts, crushed red gasoline cans, festive soda labels, toys and colored tarps. Thousands of jumbled objects are jammed together and overlaid — the field is active; it appears to pulse. The woman ironing is a silhouette cut out from the symphony of garbage; her movement is stilled by the dancing detritus around her.

In the 2010 documentary Waste Land, Muniz said of his inspiration, "If you are a visual artist, garbage becomes a very interesting material to work with because it's the most non-visual of materials. You are working with something that you usually try to hide." Artists say and do the strangest things. They think odd thoughts and are often inspired to act on them. Both good and bad artists do this. Vik Muniz is a good one.

As I understand it, this is the process behind the alchemy: Muniz directs garbage pickers to select choice items from the landfill. The selected pieces are transferred to a warehouse where a photo image is projected onto a concrete slab. From scaffolding above the projection, Muniz directs his assistants to arrange the pieces of dumpsite debris in particular formations. The image slowly evolves. The artist fusses and frets with the arrangement and, once satisfied, photographs the finished piece. Through a final step of magic, the photo is enlarged, in very high definition, to a monumental scale. The planet's biggest consumer boneyard is picked through and (partially) reborn. Garbage to gallery wall.

"The Birth of Venus, after Botticelli (Pictures of Junk)" is a triptych, 12 feet wide and 8 feet tall. It's massive. Venus is the goddess of love and beauty, standing on a scallop shell the size of a wheelbarrow. She demurely, and unsuccessfully, attempts to shield her nakedness with one hand over a breast, and one wrapping knee-length hair below her pelvis. Her efforts appear half-hearted, prescriptive, coy. Venus' shell is rendered in gears, rubber washers, bottle caps and engine parts. Bearings, springs and bicycle chains outline her body and her hair is rope, tangled and twisted past her knees. Her shell floats in a sea of jettisoned expendables — traffic cones, pots and pans, box fans, beer cans and gas cans, fan belts and gaskets.

Director Lucy Walker filmed Waste Land during Muniz's project at the landfill; the film earned an Oscar nomination for Best Documentary Feature and won the Audience Award for Best World Documentary at the Sundance Film Festival. It explores the lives of the catadores and takes a close look at a few individuals whose lives were affected by their participation in the construction of the artworks. The artist gave his earnings from the sale of one piece at auction — $50,000 — to the workers' cooperative at Gramacho. Additionally, Muniz and the filmmakers donated $276,000 to purchase a truck and computers, found a library and finance a small business training program at the dump. The dual productions of Walker's Waste Land (which will be shown at the museum in January) and Muniz's Garbage Matters shine a light on the hardship of a few thousand of Brazil's "untouchables" and, for the pickers, reveal a piece of the world outside the orbit of circling birds of prey.

Muniz has created great magic, transforming the centuries-old technical wizardry of paint on canvas into new masterpieces made of junk. But his greater magic is the greater good he's accomplished: showing to a wider world the lives of the pickers, and showing the pickers a way up, or out, to a wider world.