Dating and Mating / Don't Do This My love affair with TSA

Between the book tour, shooting 3 Wide Life and my career as a professional gypsy in general, I’ve been spending a lot of time on the road — or up in the air, rather. And at airports. Last week, I even had a layover in Charlotte going from Daytona to Austin. I’ve been traveling so much lately, I’m starting to say things like, “What time zone is it?”

… and the most action I’ve gotten is a TSA pat-down.

I am beginning to feel as though I am having a love affair with the TSA. As many of their members who have seen me naked (those in Charlotte, Milwaukee, Denver, Miami, and now, Texas), I kinda feel like a TSA whore, like a girl they just pass around. 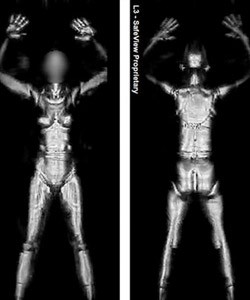 Why is it that I have to get a body scan so often when going through airport security? Do I look like a terrorist? Do I walk like I’m smuggling illegal substances in my vagina? I mean, I do confuse people with my ethnicity; I’ve been asked if I was Persian and Cuban before.

On the way home to Charlotte, after stripping down to my bare feet, the guy monitoring the metal detector stopped me from passing and escorted me into the space shuttle-looking contraption where they strip you naked with X-ray vision.

But the thing is, I have the remains of a peace sign vajazzled on me. I couldn’t help but wonder if that’s what made me suspect. And how that is going to look to them on X-ray.

After I collected my bags, and put my clothes back on, I asked the guy running the body scans if I could have a copy of the X-rays to send my Orthopedic doctor. I’m due a round of them with him and I figured this could save money on the medical bill. It was the least they could do for turning me into an X-ray rated Playboy bunny. I wonder how much radiation I’ve had to take in from these photo shoots.

But I’ll always remember my first time … my first body scan was in the Denver airport. 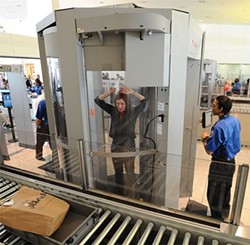 And the last time I was there in November, I got searched. I was waiting on the other end of the suitcase chute, watching a group of TSA members looking at the screen puzzled, obviously investigating my bag.

A guy who looked like Colonel Sanders came up to me: “Ma’am, what is the long metal thing in your bag?”

He went back to the screen and came back with a sketch of the mysterious object — I still had no idea what it was, or how he ever wins at Pictionary with those drawing skills. I shrugged my shoulders, sincerely confused.

“Can we look, out of curiosity?”

By all means … Note: Never say no to a TSA agent, even if it involves seeing you naked.

It was a belt I had just gotten at Urban Outfitter that had a unique metal hook on it.

The extent of my action on the road really is the TSA.

« Guys respond to my 'vajazzling'  |  Going downtown to a phallic skyline »