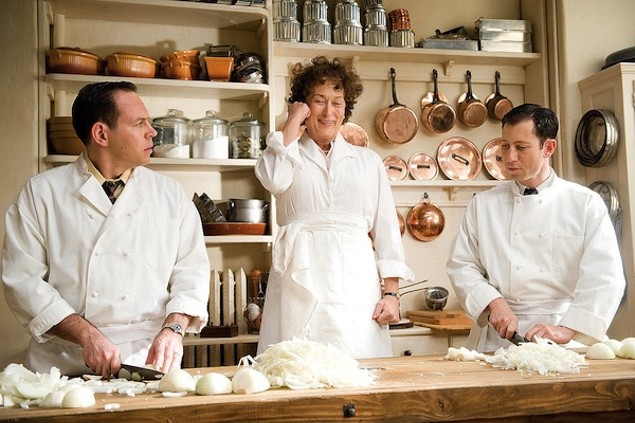 No question about it: Nora Ephron gets a bum rap from both critics and moviegoers, who often disparage her as if she were Hollywood's female equivalent of Michael Bay (and Bay at least has the sizable fanboy demographic in his corner). Certainly, she deserves a lot of heat for foisting such turkeys as Mixed Nuts, Lucky Numbers and that lamentable big-screen Bewitched on our unprotected heads, but geez, let's not forget that she's also the writer of such accomplished pictures as Silkwood and When Harry Met Sally... Of course, it can be argued that all of her best work is well over a decade old, and what has she done for us lately?

Julie & Julia, that's what she's done. Working overtime as writer, director and producer, Ephron has taken a pair of books — My Life in France, by Julia Child with Alex Prud'homme, and Julie & Julia, by Julie Powell — and combined them into one irresistible motion picture. It's a film that rises two stories, on one hand focusing on the legendary Julia Child (Meryl Streep) as she begins her journey toward becoming one of America's greatest chefs, and on the other following Julie Powell (Amy Adams) as her idea for a blog — cook all 524 recipes in Child's Mastering the Art of French Cooking in 365 days — eventually leads to fame and fortune.

The Julia Child segments of the film are magnificent. As the towering, exuberant Child, Streep delivers another astonishing performance, never lapsing into mere caricature but steadfastly making sure to capture all facets of the woman's personality. Child is a wizard in the kitchen, but she's also revealed to be a best friend to the world around her, sweeping up everyone in her whirlwind of oversized emotions (which tend to be on the cheerful side 90 percent of the time). The movie is so reverential toward Child — and Child herself is easily able to laugh at her own flaws — that when a clip of Dan Aykroyd parodying Child on Saturday Night Live is shown being watched by Julie and her husband (Chris Messina), it actually takes on the stance of a homage rather than a spoof.

The best parts of the Child sequences focus on the marriage between Julia and her husband Paul (Stanley Tucci, reuniting with Streep on the high heels of The Devil Wears Prada). A mild-mannered diplomat, Paul encourages and supports Julia's culinary aspirations and is always happy to remain out of the spotlight even as his wife's fame takes hold. Movies aren't normally where we turn to watch happily married couples in action, but the Julia-Paul relationship is one of the most blissful seen in years, and Streep and Tucci dance through their interpretations with the grace and chemistry of an Astaire-Rogers routine.

When compared to the Julia Child portions, the Julie Powell chapters aren't nearly as compelling, but they're far from the drag that others have suggested. Admittedly, the more I read about Powell, the more wary I am of her (she seems like little more than a publicity hound with some highly dubious notions on how to advance her career), but at the time when I had screened the movie, I knew next to nothing about her, and it seems unfair to penalize the portrayal after the fact. So within the context of the picture, Julie's tale is charming, and it's aided immeasurably by Adams' typically likable performance in the role.

Two-time Oscar nominee Stephen Goldblatt (Batman Forever) was brought on board to shoot the picture, and while most of the film looks good, it can be assumed that the photography of the food probably took precedence even over the actors. As in Babette's Feast, Eat Drink Man Woman and Big Night (another foodie flick with Tucci), the camera gazes so lovingly on each prepared dish (even the burnt ones!) that it's virtually impossible to exit the theater without wanting to head immediately to a gourmet restaurant. That, then, is one of the beauties of Julie & Julia: While other ambitious movies are content targeting the heart and the mind, this one adds another palatable layer by also going for the stomach.