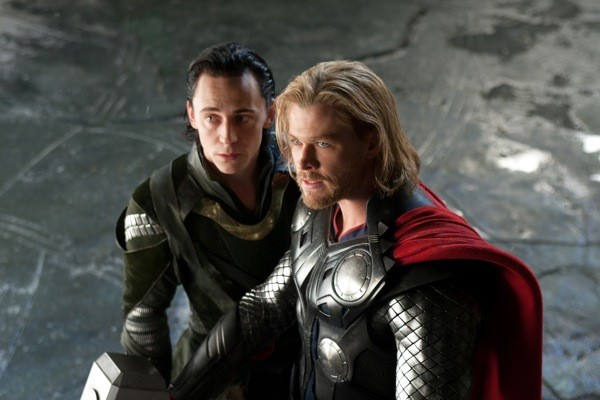 Kenneth Branagh, whose devotion to the works of William Shakespeare resulted in his designation as the modern-day heir to Laurence Olivier, might have seemed an unlikely choice to helm Thor, the latest in the growing line of Marvel Comics adaptations as well as the first blockbuster of the 2011 summer movie season. Yet it's possible that the man who successfully brought (among others) Hamlet and Much Ado About Nothing to the big screen took his marching orders directly from the Bard himself. "O that I were a god, to shoot forth thunder," wrote Will in Henry VI, Part 2, a sentiment that Branagh tries to capture in this superhero opus centering on the Norse God of Thunder.

Dividing its time between Asgard (home of Thor the god) and Earth (home of Thor the transplant), the picture finds the titular warrior (played by Chris Hemsworth) ready to be declared king by his father Odin (Anthony Hopkins). But Thor's recklessness, to say nothing of his oversized ego, convinces the Asgardian ruler to instead strip his offspring of his mighty hammer Mjolnir and banish him to our planet. This allows Odin's other son, the devious Loki (Tom Hiddleston), to usurp the throne for his own nefarious purposes. As for the Thunder God, he's aided in his earthly endeavors by astrophysicist Jane Porter (Natalie Portman) and her team and, later, by his four faithful comrades from Asgard (three of them described by an Earthling onlooker as "Xena, Jackie Chan and Robin Hood").

A perfectly serviceable entry in the cinematic superhero sweepstakes, Thor provides viewers with a good time as long as they're not taking notes and comparing it to other high-profile Marvel properties. More straight-laced than the Spider-Man films and less exciting than the X-Men oeuvre (the first two, anyway), Thor can't even match the rollicking ride of the original Iron Man, which had the advantage of Robert Downey Jr. to steer it over rough terrain. But that's not to say there isn't much to enjoy here. The film is gorgeous to behold (the 3-D is used effectively), and the battle sequences are ably handled — there's a kinetic kick in seeing Thor twirl Mjolnir to batter opponents, a perfect realization of the manner in which it was caught on the printed page. Hemsworth is well-cast as Thor — he's not as interesting an actor as, say, Downey or Tobey Maguire or Hugh Jackman, but then again, Thor was always a bit of a stiff when compared to Iron Man and Spider-Man and Wolverine — and while he and Portman don't set off any massive fireworks, they prove to be an affable screen couple (at any rate, Natalie Portman + Chris Hemsworth > Natalie Portman + Danny McBride).

Thor's primary flaw is in the storytelling department. Most Marvel flicks (and DC, for that matter) have managed to relate an origin tale while still allowing room for expansion within the same film — for example, X-Men showed how Wolverine joined the outfit but also managed to touch upon the global prejudice against mutants and Logan's search for his own roots. Thor suffers from a lack of such vision: All of the expository dots are dutifully connected, but by the time we're ready for the movie to really kick into high gear, it's suddenly over. I suppose a sequel could handle the overreach, but considering the only planned follow-up is The Avengers, in which Thor will be battling Captain America, Iron Man, Hulk, Black Widow and Hawkeye for the spotlight, it's uncertain whether he'll be given the royal treatment that presumably should be accorded a god.

(For another look at Thor, go here.)