Charlotte City Councilman Andy Dulin, a Republican from District 6, posted several comments and photographs on Facebook and Twitter Tuesday to express his thoughts on Occupy Charlotte, at one point comparing the group to the KKK.

To summarize his stance, quoted directly from his Facebook page (all spelling, grammar and punctuation errors are his):

Ive spoken with and had a cup of coffee with the occupy spokeman and he does not even know what they want. I told him that I will come down there and elp them protect the 1st admin so they can protest and say what ever they want to but that I believe they should leave at dusk and come back the next morning. The occupy folks are winertizing their tents folks. Thay are now literally building structures on the Old Court lawn. Thats just not right and they should leave at night!

The "occupy spokesman" Dulin refers to is Harry Taylor, a Democrat who unsuccessfully ran for Congress in 2008 against Rep. Sue Myrick, the 9th District Republican incumbent.

Taylor had met with Dulin about two weeks before the councilman's social media comments. Taylor said he wasn't speaking to Dulin on behalf of Occupy Charlotte; rather, he was attempting to explain why he supports the occupiers. "I thought I had a really friendly meeting with him," said Taylor.

Creative Loafing shared screenshots of Dulin's comments with Taylor. He said Dulin's social media commentary was "similar" to what the councilman told Taylor during their meeting and that Dulin "doesn't want [the occupation] to exist." Taylor added, "The great thing is Andy didn't say, 'I want them to shut up'. Andy is not an enemy of the Occupy Movement. . .," but also, "He's going to vote against them staying, period."

In response to commenters on Dulin's Facebook page, the councilman said he had asked members of the Charlotte City Council "what they would do if the KKK showed up and wanted to camp at Old City Hall" indefinitely.

Gents, There is NO current ord to prohibit ANYONY from from camping on city property for infinity. The county has rules about camping in County parks for no longerthan 14 days but the city has none. To show obserdity by being obserd I asked some Council members what they would do if the KKK showed up and wanted to camp at Old City Hall for infinity. I suggested that they would probably be a bit more energizedto do something should that occur.

The KKK, of course, is a reference to the Ku Klux Klan, the white supremacist, domestic-terrorist organization founded in response to Jim Crow laws in the 1800s. It's responsible for robbery and conspiracy to blow up a natural gas plant (Dallas, 1997), beatings (Jordan Gruver, 2006), attempted murder (multiple, 1980) and lynchings (Michael David, 1981) to name a few of the organization's more recent crimes.

By comparison, Occupy Charlotte-related arrests have, to date, included two for jay walking (of two men who've never again been seen at the occupation site), eight for blocking an entrance to Bank of America's headquarters (though five of those arrested were from the Rainforest Action Network and not occupiers) and one for public urination.

We asked every city council member, including Mayor Anthony Foxx, if Dulin posed his KKK question to them. Most have not responded, but James Mitchell, Jr., of District 2, said Dulin had not said anything of the sort to him and Patsy Kinsey, of District 1, declined comment for now, she said, "because I don't know anything about that issue."

After repeated attempts to contact him, a vacationing Dulin finally returned CL's calls Wednesday evening. Regarding his KKK comments, Dulin said he was only trying to make a point using the absurdity of an extreme example. "The KKK is an awful organization and I do not support them at all," he said. "But I thought that to make an absurd point, that if the KKK had come down there, I would imagine that the city council and the city government would have been a little bit more energized about doing something about it rather than let it linger for months and months."

Listen to the interview here.

Dulin also reiterated his position that the occupiers should go, citing issues of protesters coming and going from the Old City Hall site while leaving their tents behind. Dulin suggested Occupy Charlotte has overstayed its welcome and turned from a movement into a gathering of parking-lot Deadheads. "There's every reason why those folks should be able to protest and be heard, and I will fight for that," he said. "But I don't see any reason why those people ought to be able to leave their tents there while they go home to visit with their parents for the Christmas holidays."

Dulin has visited the Occupy Charlotte camp twice in recent days: Monday, Dec. 26, at 10 p.m., according to one of his Facebook posts, and then again on Tuesday, Dec. 27, at about 10 a.m. During his second visit, which occurred in a rain storm, Dulin took several photographs, presumably with his cell phone (many of the images are blurry), and then posted the photos to Facebook and Twitter.

During Dulin's visit, Belue said she and other occupiers were standing in a structure the occupiers call "the comfort station." It is a large, white tent with wooden pallets on the ground beneath it.

Belue said the pallets are there to prevent the campers' supplies, including food, from getting wet during weather events such as the one Tuesday that was severe enough to cut off power to thousands in the region, according to The Charlotte Observer.

She described Dulin as "rude" and "passive aggressive." "He was like, 'Have a nice day', but at the same time, 'Get out'," she said. According to Belue, Dulin asked several times about the number of occupiers, and then said he had to go to a funeral "for someone who fought for our right to protest. I just smiled and nodded, hoping he would go away."

The Charlotte City Council is expected to vote on ordinances reportedly being drafted in response to the city's duties as host of the 2012 Democratic National Convention.

On Oct. 27, the Charlotte city manager released a draft ordinance that makes camping on public property a "public nuisance" and would prohibit "noxious substances," padlocks and other camping equipment that city officials fear could impede traffic and create public safety issues.

The question is, if the ordinances pass, will they impact Occupy Charlotte?

For his part, Charlotte Mayor Anthony Foxx has insisted the ordinance is not aimed at the occupiers.

"Unlike many cities that have well-developed regulations governing protest activity, our local regulations contain gaps that need to be filled," Mayor Anthony Foxx said on Nov. 14, adding that an overhaul of the city's ordinances had been underway even before Occupy Charlotte began and that the changes aren't aimed at any one group. 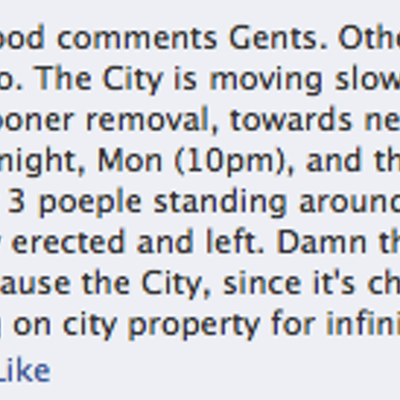 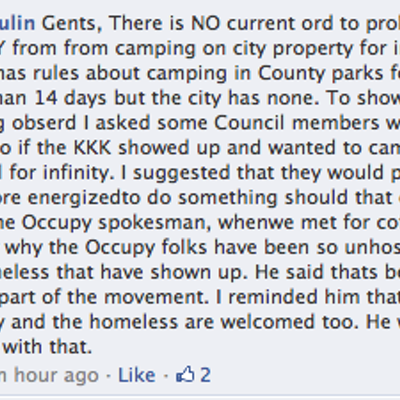