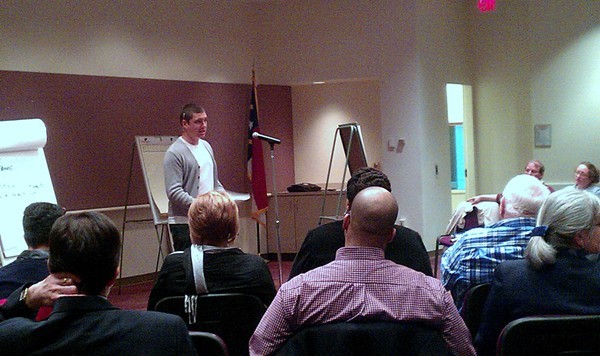 Can't we all just get along? Sure, but it takes effort. On Tuesday, Jan. 17, city representatives, members of Occupy Charlotte and several concerned citizens came together at a city-sponsored Community Relations Committee meeting where they sought to resolve their differences over proposed ordinances that will end camping, create a "free speech zone" during the Democratic National Convention, limit what people can carry and give the police the power to take action against citizens based on what officers decide is a person's intent.

During the meeting, city attorney Bob Hagemann said the ordinances are currently being modified. (View the re-re-drafted ordinances here.) Civil rights attorney George Daly also spoke up, saying the city doesn't need the ordinances and that it is acting out of fear and attempting to taint the image of protesters.

The city council is expected to vote on the ordinances Mon., Jan. 23.

Occupiers were given the floor first and they stated their case against the ordinances, specifically pointing to the ordinances' vague language, effectively giving police the power to take action based on what they decide people intend to do rather than on what people actually do.

Occupier Michael Zytkow, who was arrested at last week's city council meeting when he refused to stop talking after his three-minute time, wanted to know why the city needs to put DNC-related ordinances in place eight months ahead of the convention and why they will remain on the books thereafter. Occupier Scottie Wingfield, who was escorted out of council chambers after being disruptive last week, wants to know if the campers be given a chance to relocate if the ordinances are enacted, or if they'll be given an immediate and brutal boot? Others were concerned that the city is attempting to limit where citizens are able to exercise their First Amendment rights.

(The original draft included a 24-hour notice of eviction, the current version does not. During a Jan. 3 presentation of the re-drafted ordinances, city manager Curt Walton said, "Anything adopted is enforce immediately." Read the latest version of the ordinances here, here and here.)

At the CRC meeting Tuesday night, Hagemann defended the ordinances, offering stories about protesters in other parts of the world making molotov cocktails, "feces bombs" and more. In one of his examples, the city's attorney said that the police need the power to search people's backpacks if they hear glass rattling around since they could be intending to create a fire bomb. He said it's the police department that's concerned and pushing for the ordinances, and that it's the police who want the ordinances to remain on the books indefinitely. Hagemann also said, “We’re not trying to suspend the Fourth Amendment," and that he doesn't think the ordinances will impact the city's homeless populations, although homeless advocates asserted that they would during the city council meeting last week.

"We agree with Bob Hageman’s position and have nothing additional to offer at this time," Robert A. Tufano, a CMPD spokesman wrote in an e-mail.

Additionally, although the city has asserted for months that the ordinances aren't aimed at Occupy Charlotte but are, rather, specifically designed for the DNC, Hagemann admitted, "“To be honest with you, camping wasn’t on anyone’s mind until Sept. 17, or certainly Oct. 8 when Occupy Charlotte began.”

(Actually, Occupy Charlotte protested for the first time on Oct. 1 and they began camping on Oct. 8.)

Civil rights attorney George Daly piped up during the meeting saying that the basics of the ordinance changes are "already covered by existing law" and that, "You don’t need this ordinance. What is happening here is that you’re letting fear run the agenda. You’ve defined protesters as potential evil. You’re making an enemy out of peaceful people out of fear."

The meeting was attended by about 35 people. Creative Loafing spotted one police officer in the room, but he slipped out early ... as did Hagemann. This frustrated some of the CRC members. Pat Taft, a CRC member representing Queens University's Center for Active Citizenship, asked why there weren't representatives from every city and county organization with eyes on Occupy Charlotte — the health department, the fire department, the city council (who were, incidentally, in session downstairs), etc. She said she hopes the city will postpone their vote and hold more community meetings adding, "If we're going to have these conversations, let’s really have these conversations.”

His sentiments were mirrored later when audience members, many of whom said their impression of Occupy Charlotte was different before the meeting, described the group as "heroes" (Janet Lama, CRC, NAACP, Homeless Helping Homeless), "patriots" (Beverly Foster), and even as being calm under pressure. Roger Cardell, a volunteer mediator said he's visited Occupy Charlotte several times and that, "I’ve gone out there and heard people berating them … and they stood there and they didn’t yell back, they didn’t get angry, they answered in a calm way."

The meeting eventually broke into small groups that returned with suggestions for the city council. The groups' spokespeople stated that they'd like the city council to delay their vote, include a sunset provision in the ordinances and have more community meetings on the topic.

Willie Ratchford, the CRC's Executive Director, said that the committee will share the suggestions from the meeting with the city's attorney before the weekend. He also said that he will urge Hagemann's office to share the notes with the city council before they vote on Monday.