Image has been consistently putting out new, quality books, and Deadly Class is no different. The comic focuses on King's Dominion High School for the Deadly Arts, a high school for budding assassins, and Marcus, a desperate teenager who has no other options but to attend it. Writer Rick Remender chose 1980s San Francisco as a backdrop for the series, and artist Wes Craig was tasked with creating the unique look of the book. 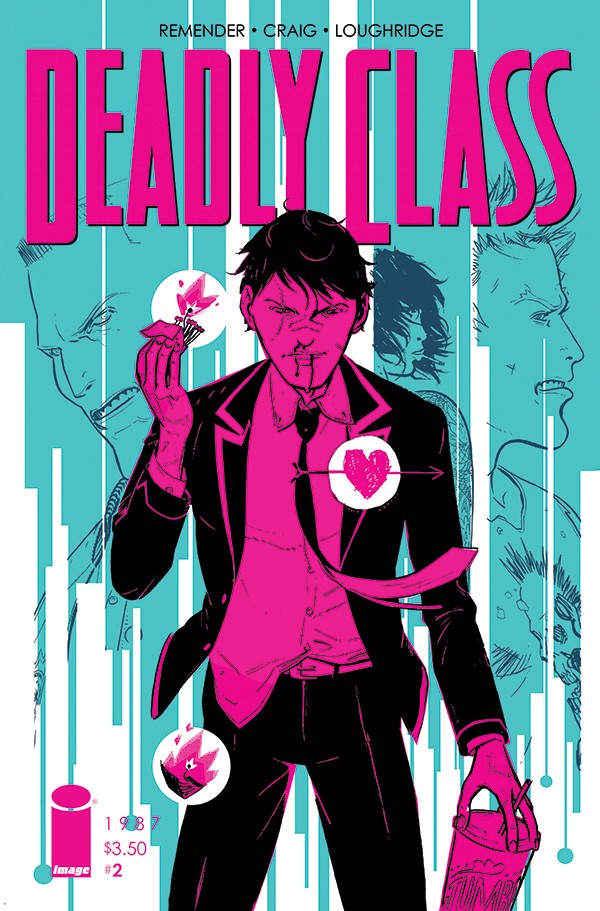 Craig was kind enough to answer some questions from Comic Afterthoughts, ranging from the benefits of working on a creator-owned book to how he concocted the book's style. See what he had to say below.

Creative Loafing: As compared to a mainstream superhero book, what are the benefits of working on a book that you own?
Wes Craig: First off, what's most rewarding as a creator is working on something you own. And seeing it grow, winning over new fans, getting the respect of other creators, and feeling like you have the freedom to experiment and make risky decisions - with the story and the art - because you don't have to worry about the company that owns that character saying no.

If you create something for the superhero market, there's a long history of creators doing that and getting screwed over in the process. So much so that there's barely been any really new important characters in superheroes in the last few decades. These days, people save their big new ideas for their creator-owned comics.

I've had a great time in superhero comics over the last 10 or so years, and worked with good people, but there's just a lot of short-sighted thinking there and I'm glad to be where I am now, trying to come up with new ideas.

Can you describe how the idea and look for the book came together?
Well, Rick Remender's the writer, and it's his idea. From there, I did a lot of research, and reminiscing, on the 1980s, and contributed a lot of my own ideas and personal experiences. As for the kind of experimental stuff that goes into the pacing and layout of the book, I've been thinking about all that for a long time and I finally have a place to really try it out. Which is probably my favorite part of the job.

What kinds of reference materials are you using to render 1987 San Francisco? Have there been any challenges in creating what we see?
For San Francisco, like I said, I did a lot of research, but I have to say honestly I didn't really "get it" until I finally had the chance to go to San Francisco and walk around and get a feel for the place. The story arc I'm drawing right now all takes place in Vegas, but as soon as they get back, I'm going to make sure I get it right this time. Mainly it's just got a lot of hills. I mean a lot of hills.

Despite a school for assassins, there's a heavy sense of realism and desperation in this world. What's it like to create that world, in contrast with one full of aliens and superheroes?
I've been asked this question before and strangely, it doesn't really feel that different. Deadly Class is much more grounded, but you're always trying to make what you draw feel real, even if it's a ray gun or a five-headed demon. I don't know, it's funny, but it's all the same to me for some reason. Maybe I've just been reading comic books for too long and it's all blended together.

What can fans look forward to in upcoming issues?
Well, issue #3 is Marcus and Willie on an evil school assignment, then issues #4-#6 involve Las Vegas, lots of drugs and lots of violence. That's the first "season" or "arc" of the book, then after that, we're back to the school to deal with the ramifications of what went down in Vegas. Here's a hint: It doesn't stay in Vegas.

What else are you working on?
Deadly Class takes up a lot of my day but I still have time to work on another personal project called Blackhand Comics, which is a web comic I write, draw, color, etc. There's a new story I just finished that will start running in March called Long Way Home. Please check it out.
***