Comic Afterthoughts Year in Review: The best of comics (and one bomb)

Some will tell you that comics just aren't what they used to be.

They're right, but in the best way possible. They're more diverse than they've ever been, offered in formats that include the classic single issue, digital issue, softcover and hardcover collections, and experimental sizes (like the great Hip-Hop Family Tree, from Fantagraphics Books). Current titles span more genres than you could wrap your head around. New cultures and demographics have entered mainstream continuities, and women are (mostly) treated as sentient beings.

So yes, comics have changed. And 2014 may be my favorite year in comics yet.

Best Miniseries: The Wake
It's a dark horse winner (but not from the Dark Horse Comics imprint). Scott Snyder did some exciting things with Batman this year, but his Image miniseries, The Wake, was special. The Critchton-esque thriller weaved in and out of hard sci-fi and abstract fantasy, from the beginning of creation to a harrowing future. For those easily freaked out by what the depths of the oceans hold, this was the scariest comic of the year. But no matter your phobia, this title is an example of why Snyder deserves to be at the helm of mainstream books. 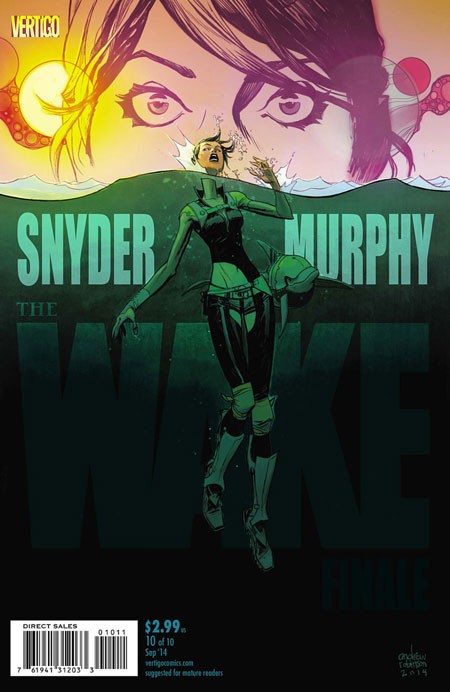 Best Graphic Novel: Seconds
Bryan Lee O'Malley conquered comics (and Hollywood) with his Scott Pilgrim series. Instead of rushing out a sophomore slump effort, he took his time and offered Seconds to the world in July. Restaurant owner Katie was one of the year's best protagonists, challenged by a new ability to change the mistakes of her past with a notebook and a mushroom. The single volume, with gorgeous interiors and asides that can only be caught on a second read, is the kind of book you lend to a friend who doesn't read comics. Fun fact: Charlottean Dustin Harbin did the book's lettering.

Best Storyline: Death of Wolverine
This is the one that'll receive the most flak. Whether or not Logan will return to comics just like every other "dead" character doesn't matter. Strip away that notion, and the ancillary stories about the effect of Wolverine's death, and you have a fantastic end to one of comics' best characters. Marvel let Charles Soule, a relative newcomer to comics, take the reins to the series, with Steve McNiven's gorgeous renderings closing out Wolvie's life. The result was something that transcended Marvel's obnoxious marketing.

Best Company: Image
It feels like every week, Image is debuting a new and fantastic title. Debuts from the last couple years include Tooth & Claw, Manifest Destiny, Southern Bastards, Deadly Class, Starlight, Trees and more. Its books often give newcomers a chance to shine, as well as oldcomers who have a narrative that requires a new universe to be created. Also, see the next category.

Best Creator: Matt Fraction
The one-time Heroes Aren't Hard to Find staffer has become a force in comics. A couple years back, he was handling Marvel's biggest events. Now, he continues to make an impact outside of mainstream arcs. Hawkeye challenges what superhero comics are capable of doing. Sex Criminals is still the funniest book of the current stock, and the creator-owned Satellite Sam's noir is infectious.

Best Comic: Saga
I'd love to put something else in this spot, but this space opera hasn't lost the magic that's making it an all-timer for the medium. Writer Brian K. Vaughan and artist Fiona Staples continue the story of Alana and Marko, who travel across galaxies to protect themselves and their baby, Hazel. "Star Wars meets Game of Thrones" was one of the first taglines given to the book, but Saga is quickly becoming its own benchmark. The series just released its fourth paperback collection. Like Vaughan's Y: The Last Man, the story will have a clear ending, and also like Y, that ending will come far too soon.

Worst of the Year
You can't really focus on the best without acknowledging a lowlight of 2014. Marvel's AXIS was bloated and too inconsistent to make it worth it. Sure, there were some cool moments, but it seems even Rick Remender couldn't steer this beast toward the epic scope it attempted.