Culture Question the Queen City: Hurricanes in the CLT

I was watching the news recently and saw a weather report about a hurricane off the East Coast, Arthur, and the beginning of the new hurricane season. How many times has Charlotte been slammed by a hurricane? — Darryl Dowdy, Charlotte

You’re right — it is that time of year again. Beginning in June and generally continuing through late November, the southern coasts are often pummelled by hurricanes.

After much research, I can only find one hurricane that packed a major punch to Charlotte and the Piedmont: Hurricane Hugo. In fact, September will mark 25 years since the monster storm ravaged the Queen City.

Although it’s not listed as the top hurricane to impact North Carolina — Floyd, Fran, Hazel and Donna supersede it, according to a report from Raleigh TV station WRAL — Hugo is the most destructive natural disaster to hit Charlotte in recorded history.

Just before midnight on Sept. 21, Hugo slammed into Charleston. It had left 34 dead in the Caribbean. Before it was finished with South Carolina, 27 individuals would lose their lives.

Although the storm began to weaken as it moved inland, it smacked Charlotte with sustained winds close to 60 miles per hour and gusts of nearly 90.

The eye of the storm would not cross through the city for nearly six more hours, but the outer bands of the giant began to take their toll as early as 3:30 a.m. In the wee hours of Sept. 22, powerlines and their supporting poles (along with numerous trees) came down in droves, smashing into homes, businesses and cars and leaving the city devastated and largely without power.

“I remember that night well. That was when I realized God loved drunks as much as he does little babies,” Charlotte native Vickie Westbrook says, laughing wholeheartedly. She elaborates:

“I was out at a bar on Morehead Street called The Cellar. The management was giving out free Lifesavers as a joke because nobody actually believed that Hugo would impact Charlotte like it did. I was much younger, of course, and I partied and drank like many of my friends at the time. Probably a lot more than I should have. I left after the place closed — I thought I was fine to drive home. I remember walking to the parking lot and weaving around as I tried to get to my car and thinking ‘I must have had more to drink than I thought,’ but I kept going.

“On the way back to my apartment in the University area, I had difficulty keeping the car on the road and trees were swaying back and forth like crazy. By this time it was already raining, and I was convinced I must have been pretty intoxicated.

“By the time I made it home and was attempting to make it up the stairs, it was like a wind tunnel. I made it inside, crawled into bed and slept for awhile — until I was awoken by the screams of my roommate. 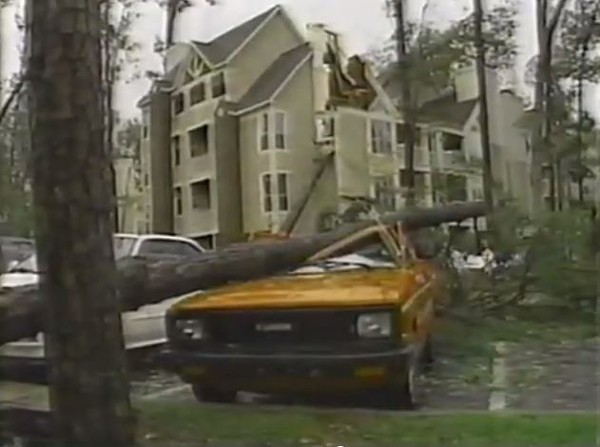 “I had sobered up by then and figured out my navigational issues were not the result of the drinks I had sucked down at The Cellar, but the wind from the storm,” she laughs again. “In hindsight, my experience was pretty funny, but what we saw come daylight was anything but.”

Westbrook was without power for almost two weeks, as were many Charlotteans. Schools were closed, people weren’t able to go to work and “access to cooked food was practically impossible. It was a disaster for the city.”

Indeed, Hugo left a very expensive trail of disaster. By the time the storm was over and done, damages from Puerto Rico to the eastern seaboard of Canada were estimated to be near $10 billion — and that was in 1989.

On a positive note, despite the damage to property, no deaths were reported in Charlotte.